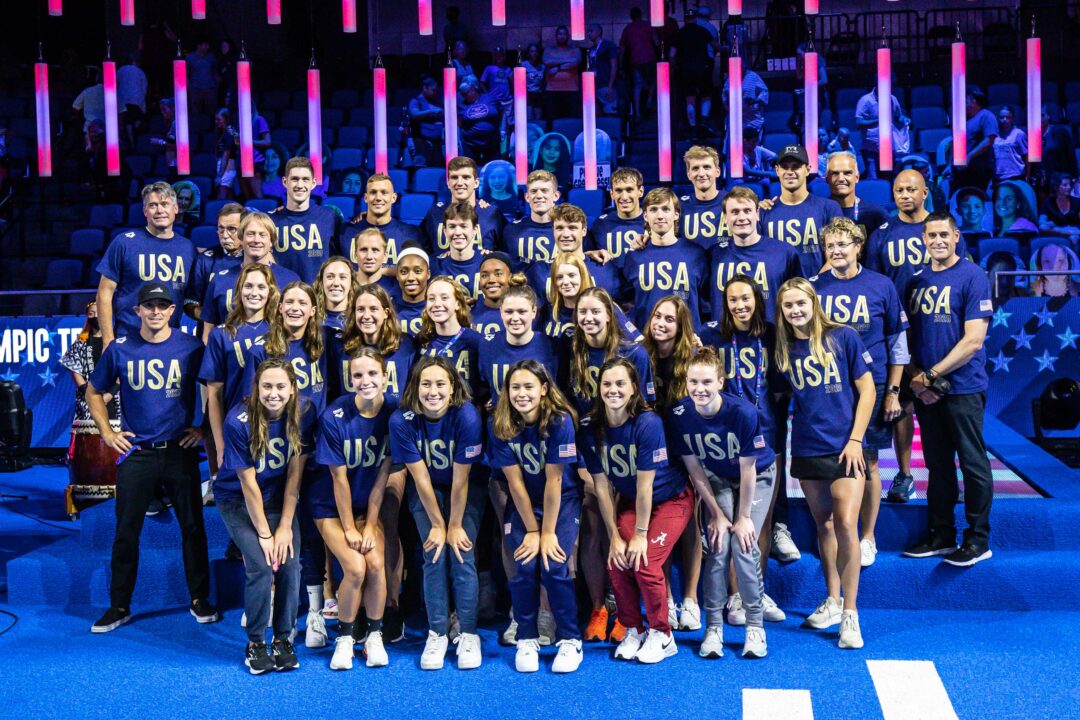 The U.S. Olympic Swim Team has arrived in Tokyo after spending about a week and a half at training camp in Hawaii getting ready. Current photo via Jack Spitser/Spitser Photography

The U.S. Olympic Swim Team has arrived in Tokyo, Japan, after training for about a week and a half in Hawaii. Prior to leaving, several swimmers posted on Instagram announcing their departure from Hawaii and thanking those involved for putting on a great camp. There was an issue with the plane leading to a flight delay leaving Hawaii, but the team finally got underway.

Swimmers largely opted to document the flight itself using Instagram stories, rather than posts, so we don’t have any on-flights pictures to share. From what we saw from a few swimmers’ stories, the flight to Tokyo may not have been quite as swanky as Mark Cuban’s plane was in 2016, but it still appeared that the team got to enjoy some primo seating.

USA Swimming’s Instagram posted a story around noon Wednesday (Eastern time) showing swimmers and coaches walking off of the plane in Tokyo, and we’ve already seen a few additional stories from Tokyo itself. We’ll update if we and when we find some more posts we can embed from team members and coaches.

The team will have another ten days to get over jet lag and settle in before competition starts Saturday, July 24th. Initially, the team will be based at a Team USA training center in Setagaya, a southwestern ward of Tokyo, then they should move in to the Olympic Village next week.

Mahalo Hawaii. 🤙 On to the next one.

Mood when we get to spend an extra day in Hawaii 🤙

Thank you to everybody that was a part of our Olympic Camp here in Oahu! Beyond blessed, and excited to represent @teamusa in Tokyo! Be back soon 😉 #TRAVELDAY
📷: @mike2swim

The picture swimswam has repeatedly used of the team must have been chosen by durden as it leaves out the Texas swimmmers.

This is the only picture opportunity of the “Olympic Team” that existed at the US Olympic Trials. Many swimmers left early. Allison Schmitt and Lilly King, for example. Short of photo-shopping them in, not sure what you think we’re to do about their decision to leave early.

Then it’s not a picture of the team.

Someone get this man a Puppers.

Why are there so many team members missing from this photo?

I wonder what the hotel and food bill was for a Marriott on the beach for 80ish people for two weeks? Someone is getting a lot of points!

USASWIMMING has a marketing partnership with Marriott and likely is getting these rooms as “value in kind” (I.e. not paying for rooms) or at a greatly reduced rate. The Marketing agreements generally call for “x” number of comped rooms over the length of the agreement that are used for staff travel, committee meetings not held in the Springs, etc. These are obviously budget relieving and likely are factored into the financial value of the deal. When a deal is announced with corporate partners, the total announced is not totally cash, but an equivalency. So, it’s likely the rooms at the training camp were far from a market rate.

Only after he got food poisoning which royally screwed his 400 IM.

Reminds me of the Barrowman’s legendary McDonald’s taper diet

not for Manuel..she didn’t place in the 100 free to earn a spot

Congratulations to their daily swim coaches. Their work ethic and encouragement has rendered this Olympic reward.

At least they’re adjusting to the Timezone change quite early .. I think this was an issue in Gwangju 2019 wasn’t it? So the Americans already in Japan but the aussies still back home in cairns .. is this considered an advantage or not ?

I think the time change is not more than 1 hour for them. Shouldn’t be a big deal

The time difference btw Japan and Hawaii is actually 5 hours

I think he means maybe Australia

I think the only advantage is that the Aussies have to overcome no jet lag. I mean, 5 hours could really mess up your practices for 1 – 3 days in my opinion

Advantage Oz. America will be locked away in a mediocre hotel until they hit the village. No freedom of movement. The village won’t be much better. The longer teams can maintain their normal semblance of life, the better. Being in a prison wears on you.. even if you are getting out to swim workouts.

Meh swimmers seemed to do fine with it for ISL. People still threw down some good times, and they were stuck at a hotel for weeks with only short breaks to go for walks. Come to think of it, ISL might have been good prep for this.

Quality difference in the training pools will be a factor.

I recall this being a big issue for Pan Pacs in 2018 as well. They arrived maybe a couple days before the meet started it seemed.