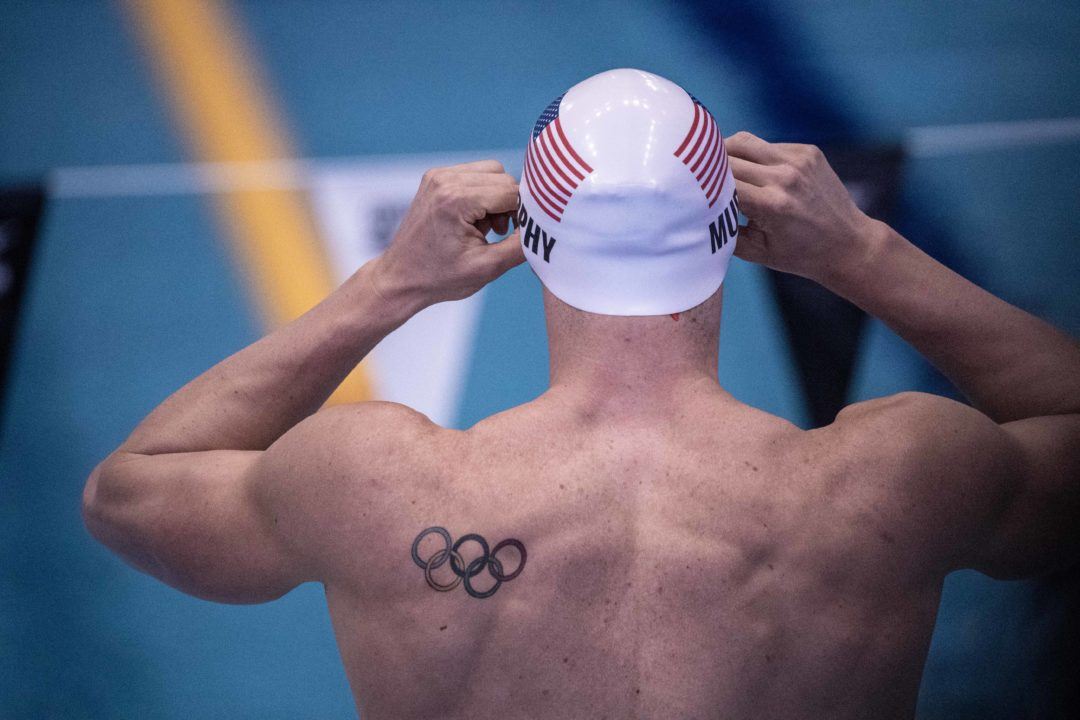 Ryan Murphy's win in the 200 back, plus gold from leading off the 400 medley relay, was part of a 7-gold run on Sunday to finish the 2018 Pan Pac Championships. Archive photo via Mike Lewis/Ola Vista Photography

Thanks to a monster medal count on Sunday, where the U.S. won 7 events (as compared to just 11 on the first 3 days combined), the Americans salvaged a historically-sound meet from the 2018 Pan Pacific Swimming Championships. With still the open water events to come, the 18 gold medals are more than Team USA won in 2014, and the 43 medals are the same number.

That gives the Americans over half of the pool-swimming golds (they could dip below that if they win neither open water race) and 41% of the total medals, both of which are so far slightly better than 2014 (which in itself was a down year).

The 1999 team, which actually lost the medals table to Australia based on the traditional gold-silver-bronze sort (both countries had 13 golds, Australia had more bronze, US had more total medals), is still the low-water mark for the Americans at this meet.

Note: medal counts may differ from ‘official’ counts, where non-Olympic events haven’t always been included. This tally is a best effort at including all races competed at the meets.

The Americans are guaranteed of winning their 5th-straight medals table at the meet, and to continue their perfect streak of having the most total medals.

Australia came away with from the pool with the most relay wins: taking all 3 women’s races (in Championship Records), plus the mixed medley. The American men won 2 relays, while Brazil’s win in the men’s 400 free relay (after the American DQ) was their first ever at this meet.

there i nothing bad in my feelings towards their medal haul . There are learning a lot through the challenges caused by a strange set of strategies & and only 8 days to adjust to the jet lag .

OMG – please don’t tell me that Nathan Adrian just did that after finishing the medley relay. Where is the anchor swimmer from the Philippines? Where is Nathan Adrian? I think I am going to puke.

At 7:44 and at 7:48. This cannot be happening to men’s relay. Someone who KNOWS FINA rules please say it isn’t so?

I will not speak the word until someone who knows confirms what I think just happened! (Puking, hands on head).

Yep, it seems he leaves the pool before the last swimmer comes home.

It seems…it’s clear from the video he did just that. Don’t think he was aware there was a swimmer still swimming. Is that a violation of rules?

Nope. Calm down with your hysterics.

No it is not. As long as you don’t create interference.

Rule is that other swimmers can’t get INTO the pool before the other teams are done. No specifications about getting OUT of pool, as I’ve seen it multiple times during celebrations without any controversy.

It is NOT a violation of any rule.

You can leave the pool as long as you don’t interfere other swimmers who have yet to finish.

interference is when a swimmer who has finished in one of the middle lanes crosses over another swimmers lane who has NOT finished (considered as wake creating disruption)! this is why many of the middle swimmers exit the pool in their own lane!

I’m sure it was covered to death in the live results thread, but man, we should really give the announcers the wrong relay names more often. That was hilarious.

The best part was that he KNEW Apple and Pieroni had the 400 free order snafu…and assumed those two just took over breast and fly duties on the US medley, same spots in the middle of the relay. Fantastic. Truly remarkable.

Listen to the Men’s 400 meter call – the announcer thought the race was over at 300 meters! He was completely confused when the lead swimmer flipped.

Eh, it could have been worse. Certainly many were slower at Pan Pacs than they had been Nationals, but I’m sure some figured it was less risky to qualify for Worlds on home soil than it would have after a double taper and long flight to Japan. The US selection process always makes the Pan Pacs a bit of a weird one. Also, the meet results are seriously tainted by the leading US male swimmer (Dressel) having a frankly terrible meet, some bizarre relay strategies and a couple of uncharacteristically awful swims. If two of three swimmers had a better meet, this could have been a lot different. All in all, if you’re going to pick one meet for the… Read more »

Imagine following any other sport and thinking, “Geez, my team might only be the best team in the world by 15 or 20 percent! We gotta figure things out!”

what bothers me the most about successful, record-setting foreign athletes – IS THEIR COMING TO AMERICA (Esp, our Colleges/Univ.) WHERE THEY GET FREE TRAINING AND THEN GO BACK TO THEIR COUNTRIES TO BEAT AMERICANS AT THESE MEETS, Damn It!! I truly feel we should NOT let them train in America’cause they are using American PAID FOR facilities and coaching which they NEVER PAY FOR ANYTHING!! If you check out most of those winning foreign athletes, you will find that many were trained at American expense – so keep the training for Americans and the we will WIN MORE MEDALS!!!

Thanks but the announce used the wrong names??

You should read the live recap comments

Only 5 countries won medals .. they need to invite more competition at this meet

The Asian Games start next week in Jakarta. It is a bigger meet for countries like China, which didn’t send its top swimmers to Pan Pacs.

south africa was invited, but they didn’t had the money to go, and china decided, like they always do, to rest their best for the Asian games.. other asian countries did the same.. having palau or fiji, just for the sake of having more , wont matter much, if those countries dont have good swimmers to win medals. ex, the Philippines..

South Africa has some rough times ahead of them financially with what’s going on in that country. I wonder how that is going to impact swimming.

Well.. the problem is why did the organizers schedule Pan Pacs just one week before the Asian Games.

china would have had a medal sweep. given that they crush japan at the asian games.

Japan is much stronger than they were 2 years ago . China is not gonna crush Japan at all

PanPacs was originally a challenge between Australia, Canada, Japan and the USA, but it has expanded to 15 countries as far remote as Oman (doesn’t have any land on the Pacific, but sent 2 swimmers which neither got past their first race)! Argentina with a tiny Pacific exposure/Tierra Del Fuego sent swimmers, but not Chile nor Mexico both of which have long Pacific coastline (none of the Central American countries sent any swimmers)!! the Asian Games will have more smaller countries competing, but expect the top 3 medal winners will be between Aust, vs China vs Japan!! the expenses involved in getting to the Asian sites (Tokyo and Sydney) of PanPacs and the jet lag is why the South American… Read more »