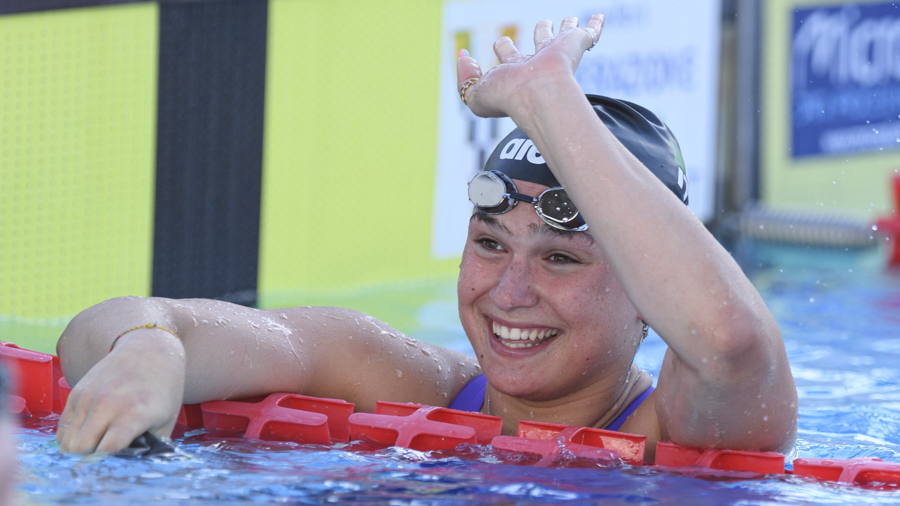 Benedetta Pilato was only 14 years old when she won a World Championship silver medal in 2019, and she hasn't slowed down since. Archive photo via Andrea Masini / Deepbluemedia / Insidefoto

In ancient Greece, the word “talent” (or better talento) was a unit of measurement that was used to quantify weight and mass.

Can you even imagine how many discussions between friends and sports fans could have been avoided if, even today, there was a universal yardstick for measuring what we call talent?

It is a gift, some say, it is a predisposition, others respond. The only certain thing is that when an athlete with pure and crystalline talent appears in front of us, we all notice it immediately, no doubts.

Benedetta Pilato was born in Taranto, in the south of Italy in January 2005. Greatness appears everywhere and at any time, even in a little town of Europe with not enough facilities for training. She grows up in the little swimming pool of her little village trained since the first day by her current coach, Vito D’Onghia, who has lived with her every single turn of this journey.

Benedetta’s entrance to the world of swimming has been fast, strong, and overbearing, just like her breaststroke. An innate strength, applied both inside and outside the water, which materializes in a gentle impetuousness, overwhelming but simple, has upset the rankings of the most technical stroke of swimming.

It is difficult to say when Benedetta’s journey towards the Tokyo Olympics really began.

Perhaps in 2018, on the day she won her first medal at the Italian National Championships. When she was only 13 years old she climbed the podium of the 50 breaststroke.

Perhaps the following year, when her name began to circulate even outside the country, winning silver at World Championships behind the Olympic champion Lilly King. Even this medal was always in those same 50 that is beautiful to look at, but not at the Olympics.

More likely, however, Benedetta’s journey started a year later, at the exact moment in which the IOC officially announced the postponement of the Olympics.

The deepest dream of every swimmer is to represent their country at the Olympics, who says the opposite or jokes, or lies. And the “Planet of all swimmers” takes 4 years to complete a revolution, and to bring you back there, to the starting block with the five-circle printed on it.

4 years can be a very short period of time, or very long, it depends.

When you are 12, like Benedetta was during Rio 2016, being able to see 4 years in front of you is impossible, even less if those years become 5.

But let’s think about what was going on only 12 months ago, when in Italy the name of the two breaststrokers who would take part in the Tokyo Games seemed already written. and neither of them matched with Benedetta’s.

At the time, however, there were many things that could not even be imagined. Of course, no one thought that a global pandemic would hit our planet and that among the many and very serious consequences there would also be the unprecedented postponement of the Olympic Games.

One more year becomes a boulder put on the shoulders of oldest athletes, who maybe say goodbye to one last Olympic. But it was more like a push on the back of the youngest, who have been given a double gift, Tokyo one step away, and the Paris edition just 3 years far away.

To date, the story of Benedetta seems to represent the perfect personification of this new opportunity. When, in December 2020, the not-yet sixteen-year-old achieved the Olympic qualification standard by signing a new Italian record in the 100 breaststroke, the entire pool fell silent shocked by the enormous progress made by that young woman.

From a sacrificial lamb of a competition schedule without her best race, to a real contender for one of the spots on the Olympic podium: a fast and frenetic journey, more like a glide. It takes a lot of courage and a great speed to be able to fly.

It has been interesting seeing her progress on the international stage. I’m sure she will try and give Lilly a good race.

It can be a rocky road of suicide attempts , self harm ,& even death threats & I wish peeps would leave them.alone .

I’d like to know how she trains – that stroke is so high tempo, so impossible to hold for even a full minute without rest

Her stroke is so fast but not Peaty-esque at all, she’s really high on the tempo and high in the water, I’d also be very Interested to find out more about her training methods and what she focuses on during a 50 !
It’s insane to think that even a stroke as old and regulated as breastroke can still show two vastly different approaches to being the fastest in the water, with Peaty and Pilato