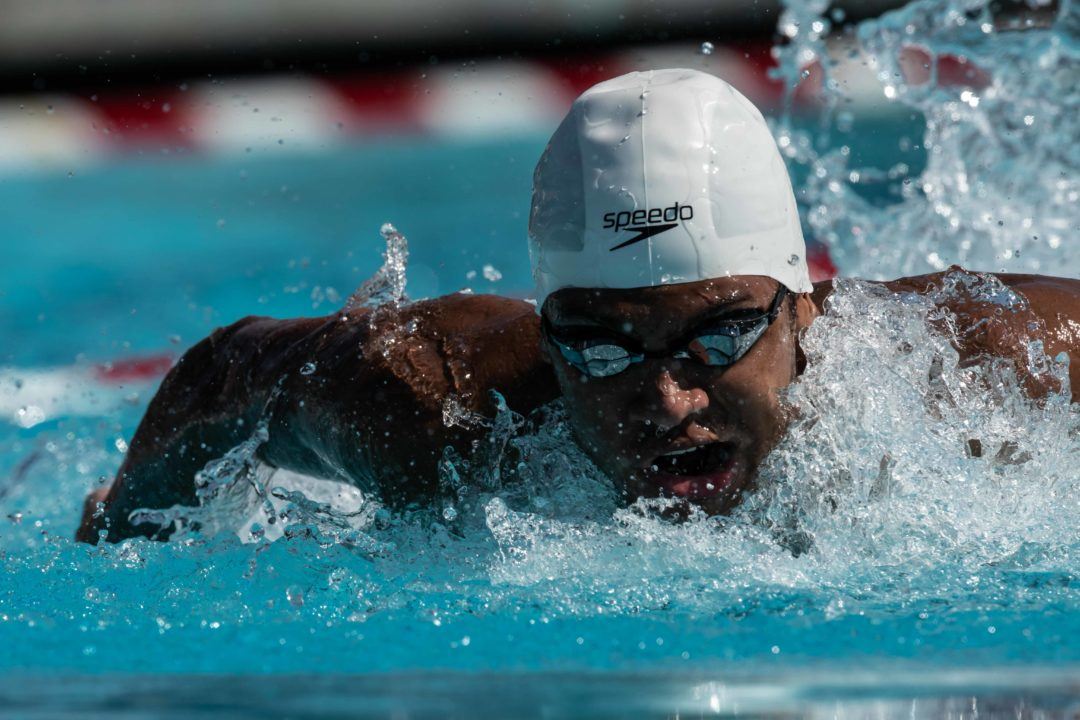 Jack LeVant's injury comeback is one of the five storylines to watch at the final stop of the Pro Swim Series in Clovis. Stock photo via Mike Lewis/Ola Vista Photography

With the final Pro Swim Series stop just a day away, there are many swims yet to be seen. Here are five storylines to watch for at the Clovis PSS stop.

1. Jack LeVant Is Back

Coming off his medical complications preventing him from the 2019 NCAA meet, Jack LeVant makes his way back with his Pro Swim Series debut. At the Santa Clara International meet, after nearly four months of not competing, LeVant was off his personal bests. LeVant swam a 1:54.33 in his 200 free while swimming a 2:05.05 in the 200 fly.

LeVant is scheduled to swim those two swims along with the 100 free and 100 fly. With Luca Urlando swimming by his side, LeVant could shake off the cobwebs and get back to racing.

After putting up the top time in the country in the 200 fly, the 17-year-old phenom is looking to take down some monstrous records. His personal best time of 1:54.35, swam at Mel Zajac, is already a second under the PSS record of 1:55.29, held by Li Zhuhao.

Because he is so close, his next 2019 milestone would be holding the #1 time in the world. The top time of 1:53.19 belongs to Hungarian Kristof Milak.

The likelihood of Pickrem snagging the top overall series swim is slim to none, however. Her 200 IM time is only 943 points, which ranks 7th in the PSS top 10 times. But, Pickrem could earn big-time prize money if she were to sweep the IM events and the 200 breast.

Speaking of money, Leah Smith could see herself moving into the top-10 earners of the whole PSS. Although only swimming the 200 free, 800 free, and 400 IM, her stellar swims this year can certainly help her earn some more cash.

In Richmond, Smith swam to a personal best time in the 800 free with a 8:16.33, ranking her 3rd in the world. With only Katie Ledecky (8:10.70) and Jianjiahe Wang (8:14.64) just seconds off Smith’s season/personal best, can she swim her way to the top time in the world and challenge Ledecky?

National teamer Devon Nowicki returns to the Pro Swim Series as the top seed in the 50 and 100 breast. However, after his recent performance at the MLA Big Red Challenge, Nowicki may be shut out of the top 4 prize money.

Of course, going from a local meet to a Pro Swim Series comes with a greatly-heightened level of competition and intensity. With championship season looming around the corner, will Nowicki be able to reach his personal bests of 27.10 and 59.48?

Guess we should have rested more and shaved down even tighter for that Big Red Challenge, Dev 😂

Did he swim prelims wearing a parachute?

“Can [Leah Smith] swim her way to the top time in the world and challenge Ledecky?”

C’mon, Smith is a great, great swimmer, but you’re just setting her up for failure here. She *just* went her PB of 8:16, and now you’re asking if she can pass by Ledecky’s 8:10 this weekend? Sorry, but there’s no way, and that’s no knock on Smith.

All my friends who are already there are complaining there is no shade under above 100 degree temp. Are they putting up any tent? I am hoping they are…

Vote Up4-1Vote Down Reply
break it down

105 degrees, sunny skies, sounds like swimming heaven! Not sure what your friends’ problems are, sorry to hear they’re upset.

Cancel the meet! It’s over a 100 in Clovis, that never happens! And nobody has an EZ up in the city, what the heck!

Will be cooler for the rest of the meet. The CIF state meets I attended (albeit at the other Clovis HS), had very nice large canopies over the grandstands.

Video feed showed no shade over grandstands. Looks like athletes will be baking in the sun for the sake of more aesthetically pleasing TV camera angles. A clean deck first and foremost, screw the athletes is the new USA swim model.

they’ll have stuff set up tomorrow. They are just disrespecting the distance swimmers