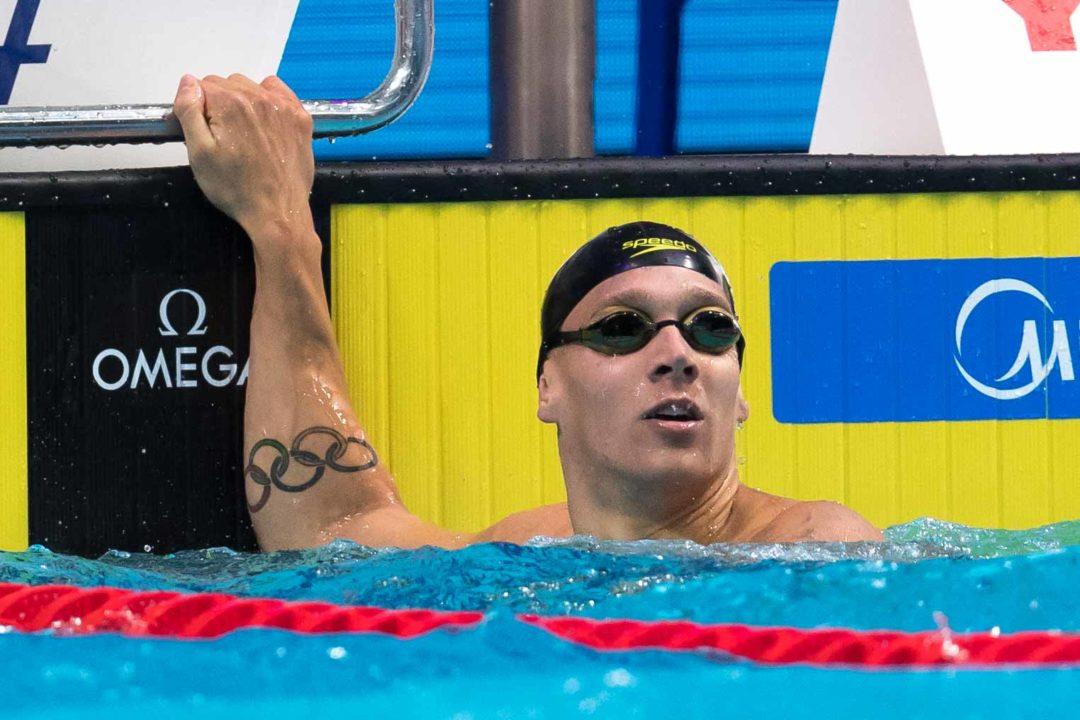 Caeleb Dressel is sticking with the 50/100/200 free and 50/100 fly this weekend in Mission Viejo for the 2019 Swim Meet of Champions. Archive photo via Mike Lewis/Ola Vista Photography

The annual Swim Meet of Champions hosted by Mission Viejo Nadadores begins this Thursday in Mission Viejo, CA. One of the highest profile domestic non-major meets of the summer, this is a huge draw for California-based athletes, with a few standouts joining from elsewhere.

#1 CAELEB DRESSEL TO GET PRE-WORLDS TUNE-UP

Caeleb Dressel is indeed listed on the psych sheets in what could be his last bit of racing before the 2019 World Championships in Gwangju set for mid-July.

Right now, his highest-ranked swim in the world this year is his 47.86 100 free from the Atlanta Classic in May. Here in Mission Viejo, he’ll face the likes of South African record-holder Brad Tandy of Phoenix Swim Club, Egyptian record-holder Ali Khalafalla with Alabama’s pro group, and Trinidadian record-holder Dylan Carter of Team Elite.

Also clashing with Dressel in the sprint fly will be Giles Smith of Phoenix Swim Club, Marius Kusch of Team Elite, and Tom Shields of Cal.

Annie Lazor has excelled under the IU pro group, and her progress has peaked (so far) with an outstanding performance at the Pro Swim Series – Bloomington, where she became the 9th-best performer ever in the event and 2nd-best American. Meanwhile, teenager Erica Sullivan of Sandpipers of Nevada continues her own progression in the distance freestyle. She’s quickly becoming one of the best distance swimmers in American history, having just this past weekend moved into the #4 performer slot all-time in the mile.

#3 TEAM ELITE SHOWING UP IN NUMBERS

David Marsh’s Team Elite will be very much so in attendance this weekend. Among their American swimmers will be Jacob Pebley, Lia Neal, Ali Deloof, and Kendyl Stewart. There is a sizable Chinese contingent, too, including Yan Zibei, Xu Jiayu, and Zhang Yufei, while German swimmers Jacob Heidtmann and the aforementioned Kusch are entered.

In the backstrokes, Russian Daria Ustinova will contend for titles in the 100 and 200, largely with club teammate Deloof and Wisconsin Aquatics’ Beata Nelson. It’ll be interesting to see what Nelson can put together this summer after a thunderous junior NCAA season which resulted in an American record in the 100 back and three national titles.

Nelson won’t be racing any butterfly events, though Stewart will have her hands full with teammate Alyssa Marsh and Swede Louise Hansson in the fly races.

#4 JORDAN WILIMOVSKY TO RACE FOR JUST THIRD TIME IN 2019

David Heron is also entered in this meet– he will join Wilimovsky in open water this summer, while Tunisian 35-year-old (and 2008 Olympic champion in the 1500) Ous Mellouli and rising IU sophomore Michael Brinegar are also in the mix.

#5 YOUNGSTERS IN THE CROWD

Several top young swimmers from the U.S. will be in attendance this weekend. The two biggest names are Southern California Swimming standouts: 15-year-olds Katie Crom (Mission Viejo) and Justina Kozan (Brea Aquatics). Both girls are two of the fastest 200 butterfliers in age group history. Crom is entered in the 50/100/200 fly, 200/400 free, and 200/400 IM, while Kozan is entered in the same events minus the 50 fly and 400 free.

Damn I regret not signing up for this meet 🙁

Anyone have an idea why Dressel decided to fly out to Socal for this meet?