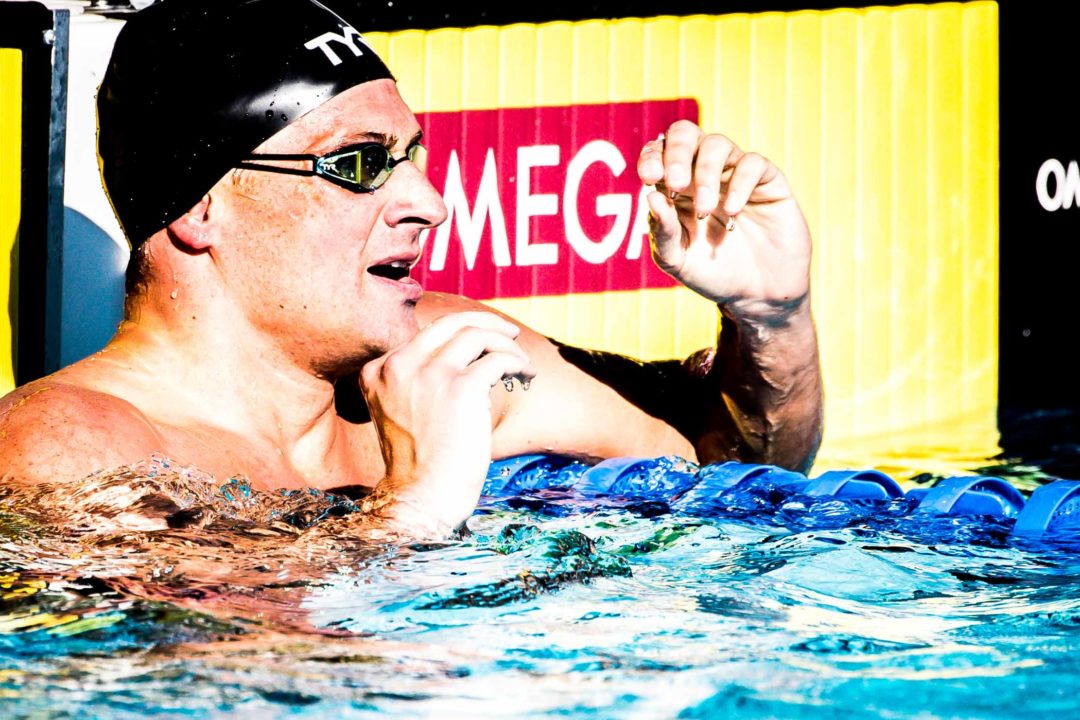 Ryan Lochte is chasing a 5th Olympic team, Chase Kalisz a bounce-back year, and Carson Foster a place among the top senior IMers in one of our races to watch. Archive photo via Jack Spitser/Spitser Photography

For the first time since 2000, the U.S. men won’t be sending a Michael Phelps/Ryan Lochte duo to the Olympics in the 200 IM (barring a quick un-retirement from Phelps). That leaves this race wide open for the top U.S. spots, with all sorts of converging storylines.

There’s Lochte, the 35-year-old who has won a dozen Olympic medals over the past 15 years. He sat out most of last year with a suspension, but returned to win the national title in August. There’s Chase Kalisz, the 25-year-old former training partner of Phelps who rose to the top of the domestic IM scene in the absence of Phelps/Lochte, but struggled last summer after a lifetime-best in 2018. There’s the youngster, 18-year-old Carson Foster, who is making a push for the Olympic team after winning World Juniors last summer.

The drama here bleeds over a little into the 400 IM, where Lochte is entered, though he has only two swims in that event since June of 2016. Kalisz is entered there, but hasn’t had a best time since 2017. His college teammate Jay Litherland has risen to the top of the nation, but Foster and Florida sophomore Bobby Finke are both lurking. Finke beat Foster for the national title last summer.

Maybe the most hotly-contested race in American swimming right now, the 200 free has no clear favorite, and the six national team spots last season were separated by about a half-second. Four of the six are present in Atlanta, with a few intriguing outsiders. Florida sophomore Kieran Smith has risen fast in this event, crossing over from his primary IMs. Townley Haas was once the clear-cut favorite here, but was off his game a little last summer, his first as a pro after wrapping up his college career at Texas. Harvard’s Dean Farris is taking a redshirt season and training with Haas in Texas. And high schooler Luca Urlando continues to make his case for the team – the 17-year-old is one of the top junior contenders for the Olympic roster.

Blake Pieroni and Andrew Seliskar are national teamers in the event, but not competing this weekend. There are others in the mix, though. Indiana pro Zach Apple was last a World University Games star in the 50 and 100 free. Caeleb Dressel is the world’s best sprinter, and has always showed potential to have a top-ranked 200 free, if he can fit it in his already-busy schedule. There are a few internationals, too: 2019 Pan Ams champ Fernando Scheffer of Brazil is the most notable.

Another wide open field in the men’s breaststrokes. Since Kevin Cordes and Cody Miller represented Team USA in the 100 breast at both the 2016 Olympics and 2017 World Championships, two new faces have stacked the top travel roster spots in the years since: Michael Andrewand Andrew Wilson. Compared to Cordes (Arizona) and Miller (Indiana), neither of the two new breaststrokers competed in the NCAA’s Division I. Wilson was a Division III standout for Emory, while Andrew turned pro at age 14 and skipped his collegiate eligiblity.

Wilson led all Americans last season at 58.93, the only man under 59 for the season. Miller had a solid season at 59.24 and looks to be returning to health after an injury-riddled 2018. Andrew is not competing in Atlanta. But Wilson, Miller and Cordes will also have to contend with Miller’s training partner Ian Finnerty, the NCAA standout who just set the short course meter American record in the 100 breast during the ISL season.

And this field is deep. Nic Fink has represented Team USA in the 200 breast during this Olympic cycle and will contest both the 100 and 200. 30-year-old Brandon Fischer had a career-year last summer and gets his shot at the big dogs this week. Brazil’s Joao Gomes is one of the world’s better speedsters, and Olympic 200 breast champ Dmitriy Balandin of Kazakhstan is also in Atlanta.

Much like the 200 free, the battle for the final relay spots in the 100 free is in full swing. This race has both star power and depth. Caeleb Dressel won the world title last summer and just missed the world record. It’d be a surprise to see him fully peaked enough to challenge the 2009 suited world record this weekend, but you can’t fully rule it out after a strong ISL season.

Behind him are a bunch of breakout stars. Ryan Held broke the U.S. Open record at Nationals, and both he and Dressel could be challenging that record (47.39) this week. Zach Apple was a relay star at both World University Games and Worlds, splitting 46.8 on a Worlds relay. Dean Farris split 47.0 at World University Games. Texas grad Tate Jackson is coming off a big summer and is typically very fast at mid-season rest meets.

This field is extremely deep, with four men seeded under 48 and sixteen seeded under 49. That means everyone is going to have to turn on the jets in prelims just to make the evening A flight of the A and B finals.

Another event with some uncertainty. 17-year-old Luca Urlando has been rapidly rising to the head of the U.S. field here. He broke a Michael Phelps National Age Group record for 17-18s, and could lower that further this week while still on the younger end of the age group.

Last summer’s Worlds entrants were Louisville pro Zach Harting and Arizona grad Justin Wright, both upstarts who had outstanding summers of 2018 to put themselves into the Olympic hunt. But a relatively open field also offers an opportunity for standout IMer Chase Kalisz to chase another medal – he grew up training and competing alongside Phelps, and always appears to be looking to expand his event lineup the way Phelps did.

Nicolas Albiero has been a college standout at Louisville, and could be an outsider on the rise in this event. And sprint sensation Caeleb Dressel is entered here, though he may wind up scratching in favor of the 100 free. Throw in Australia’s Worlds semifinalist David Morgan, Brazilian Pan Ams champ Leonardo de Deus and several other key names and this field could be stacked all the way into the B final.

Looks like you guys forgot to mention one of the bright and upcoming stars of the meet: GORDON WHEELER!!!!! He is back with a vengeance after his disappointing showing at Richmond, expect to see him in the A final of at least 3 events. From my scouting report of watching him at practice, he has been holding 24.5s 50 fly LCM without a fast suit, cap, or goggles. Once he gets his shave and fresh Mizuno on, he will be UNSTOPPABLE!!!!!

Wheeler for President as long as Dean Farris endorses him!

Sure he trains without goggles!?

For race pace yes. You never know when your goggles will fall off in a race.

Promising young talent out of Cincinnati Ohio, make sure to watch out for him making money moves in summer 2020

Don’t forget about Michigan senior Miles Smachlo in the 2 fly. A fast riser and a 1:55 has potential to make waves.

Miles Smachlo will be in Minneapolis.

Good choices, we need some guys to step up in the IMs and mid distance frees going into next year

Come trials, how big a lead does Andrew need at the 150 to be confident of holding off at least four of Kalisz, Foster, Seli, DeVine and Lochte?

Lochte will be within 2m.

I’m not saying he’ll have 5m, chances are virtually nil, but it’s such an unusual race strategy it’s interesting to speculate!

you have my blessing to go after anyone but lochte. You shall not touch lochte

Nah fam, I don’t go after Lochte. He goes after me. I’m shaking in my boots.

15
-1
Reply
remel can do anything
Reply to  Togger

i don’t think he will have a lead.

20
-1
Reply
Heyitsme
Reply to  remel can do anything

Andrew behind Foster and Lochte by .01

Andrew will definetley be in front of Foster at the 150. Lochte, however…that’s a different story

Speaking of Devine, I didn’t see he was entered?

Some TE are entered…some aren’t. Most of the National Teamers not entered are training in California…..mostly Cal guys!

I thought Dressel was going to win this. Are you talking about holding off for second place?

No 50 free for Dressel?? Now that’s a bummer

Hot takes for the meet:

1. Chase doesn’t come top three in the 2im, pulls out of 4im.
2. Dressel goes 21.7 and 47.9 on not much rest.
3. Dean Farris has brief moment of looking like a mortal due to a slip from a banana peel on deck, but then returns to his other worldly status by flexing his right peck behind the block

I’m pretty sure the banana peel slips on Dean.

Any word on David Nolan? Is the comeback still on?

Great question. Don’t think he had a qualifying swim for bthis meet. He’ll need to find some random swim meet to get his Trials cut won’t he?