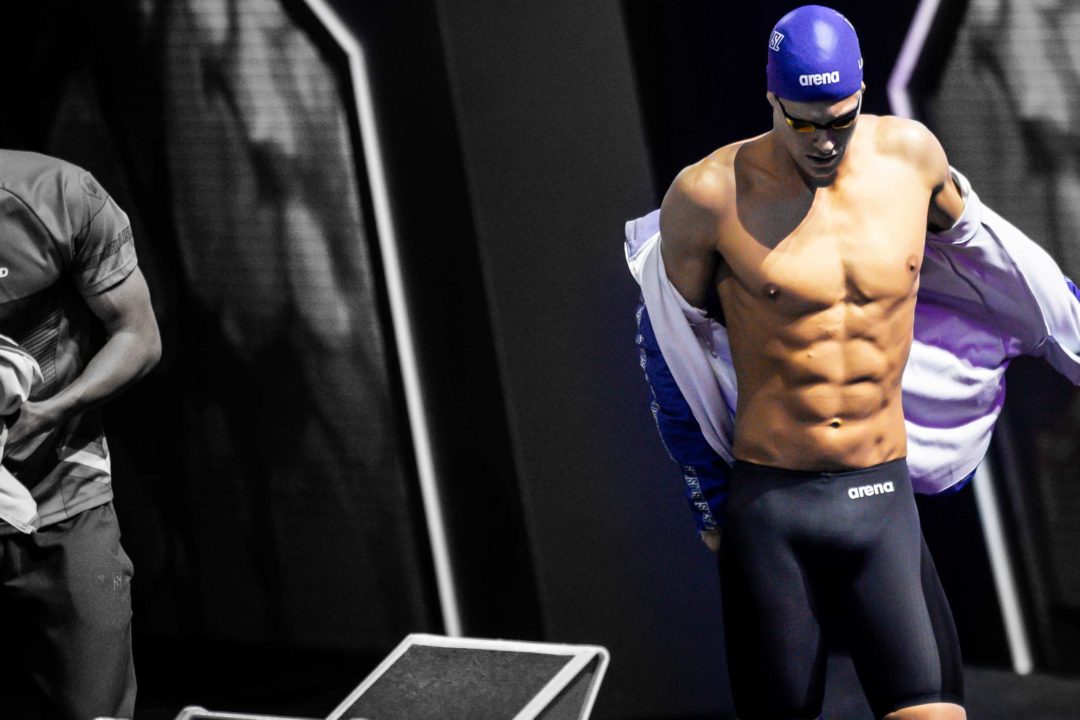 Mitch Larkin is currently ranked among the top 5 swimmers in the world across the 100m back, 200m back and 200m IM events but will he race all 3 in Tokyo? Archive photo via Jack Spitser/Spitser Photography

Just as Wave II of the U.S. Olympic Swimming Trials is set to get underway shortly, another powerhouse nation’s best will soon be taking to the pool in the hopes of booking tickets to Tokyo.

The Swimming Australia Olympic Trials begin on Saturday, June 12th and run through Thursday, June 17th at which point a roster of no more than 28 males and 28 females will be announced.

As a refresher, Australia placed 2nd in the overall swimming medal table at the 2016 edition of the Olympic Games after having collected 10 pieces of hardware, still a distant 23 medals away from the top-performing country of the United States. In addition to Kyle Chalmers taking gold in the men’s 100m freestyle event, Mack Horton topped the men’s 400m free podium while the women’s 4x100m free relay grabbed gold in a new World Record-setting time.

Looking ahead to who may be poised to make some noise for Australia next month at the main event, let’s ask the big questions for this week’s Trials down under.

How will everyone’s shoulders hold up?

Since winning gold in Rio, the aforementioned Chalmers has undergone a series of surgeries to address his heart condition called Supraventricular Tachycardia (SVT). However, more recently, the 22-year-old South Australian opted for shoulder surgery. Last November he told SwimSwam, that his shoulder procedure was a ‘cleanout to ease the pain’ and that he’d be back ‘really quickly.’

Chalmers raced in January of this year, logging a swift 48.55 100m freestyle just 8 weeks after his procedure. He quickly knocked that down to a mighty 48.04 from the Australian National Championships in April. That makes him the fastest Australian this season, as well as the 8th fastest performer worldwide.

But Chalmers isn’t alone, as mid-distance freestyle ace Ariarne Titmus has also been dealing with a nagging shoulder injury. 20-year-old Titmus, whose major claim to fame came at the 2019 FINA World Championships when she beat American icon Katie Ledecky in the women’s 400m freestyle, withdrew from national team training camps earlier this year.

As we reported in February, a Swimming Australia statement at the time read, “Ariarne is currently managing a minor left shoulder complaint. As the National Event Camps will consist of a lot of high-intensity training sessions, the decision was made for her to remain in her home program to continue with her own structured rehab plan.”

What will Mack Horton do?

Horton took the 400m free event in Rio with a gold medal-worthy performance of 3:41.55 and followed that up with silver at both the 2017 and 2019 FINA World Championships behind China’s Sun Yang.

However, the Melbourne Vicentre man has been far from those types of times in this event, with his quickest since 2019 marked by the 3:50.70 he produced in March at the New South Wales Championships. That’s about where Horton was leading up to the 2016 Olympic Games, so we very well could see him pull a time more in the 3:45-ish range without batting an eye. He simply needs to place 1st or 2nd and get under the 3:46.34 Australian QT.

Will Mitch Larkin show the 200m back some love?

27-year-old Mitch Larkin has some decision-making to do, as the man is ranked among the top 5 in the 100m back, 200m back and 200m IM. The 100m back is fairly easy to tackle in terms of where it falls in the overall Trials program, but the latter 2 events overlap in a big way as both take place on day 5.

In October of 2019, speaking at an International Swimming League (ISL) match, Larkin said then that he’d probably swim both the 200m IM and 200m back races at Trials, but would not be swimming both in Tokyo should he make the squad in both. This was after he dropped the 200m back event at that year’s FINA World Championships. There in Gwangju he snagged 100m back bronze but wound up 7th in the 2IM despite posting a 1:55.72 Aussie national record at the World Championships Trials.

What damage will Kaylee McKeown unleash?

One of the most electric swimmers in the pool today is 19-year-old Kaylee McKeown, the USC Spartan who has been wreaking havoc across the backstroke and IM events since 2019.

McKeown has opted out of the 400m IM for these Trials, which means she will not be contesting the race in Tokyo. Her 3-event lineup thus consists of the 100m back on day 2, the 200m IM on day 3 and the 200m back on day 6, which is a nice spread considering she could have entered freestyle events as well. With this type of schedule and the fact she’s already within striking distance of world records, all eyes will be on McKeown in South Australia this week.

Can Emma McKeon Pull Off a Golden Quartet?

Olympic medalist and a name synonymous with Australian swimming, Emma McKeon, is set to take on her typical packed schedule of the 50m/100m/200m free and the 100m fly races. She put on an absolute show at the Sydney Open, crushing a near-lifetime best 52.29 in the 100m free, in addition to hitting 56.81 in the 100m fly and 24.58 in the 50m free to take home 3 gold medals.

Although she opted out of the 200m free, the schedule there in Sydney mimicked what she’ll be doing here, with the same competitors to the tune of Cate and Bronte Campbell in the pool along with Brianna Throssell and the aforementioned Titmus. With the form she’s showing, it’s a real possibility she could come away with claiming the Aussie Trials titles across all 4 events.

The 100m fly could be especially exciting for McKeon should she make the team for Tokyo. She already got a taste of an Olympic final in Rio where she placed 6th before reaping bronze in the 200m free there.

Currently, McKeon ranks #3 in the world in the 1fly with a season-best of 56.44, a time that is much quicker than the 57.04 produced in Rio. With Swedish superstar Sarah Sjostrom sticking to freestyle events due to her elbow fracture, this could be McKeon’s time to shine.

So it’s been reported that Larkin has chosen the 200IM.

I initially tried to link the article and it got auto-moderated.

maybe. I know that if you send a link in isolation it gets picked up as spam, but if you preface it with text you’re in the clear

Austria is such a cool place! Went to Sidney and then Perth and saw the kangarros, !

I still don’t understand why the Olympic trials have morning heats and evening finals given it won’t be that way at the Olympics? Shouldn’t we be selecting people who can swim quickly in the morning?

For the same reason that the Olympics have evening heats and morning finals: television.

Feels like the end of an era. Possibly the last hurrah for swimmers like Seebohm, Larkin, Horton and the Campbells.

That second 100m back spot is still open .. Atherton hasn’t really shown it’s hers just yet ., also the same for 200m back

Seebohm is such a tough competitor, don’t write her off!

plus her strange sexual harassment complaints

I guess I’m not sure that I’d use the word “strange,” but to me they are, at the moment, “confusing” at least.

Also her refusal to even speak to SA last year and now is just weird.

Sadly she’s becoming a bit unhinged based on her recent social media rants .. I hope she gets the help she needs to overcome this animosity for her mental health sake

Swimming Australia needs to contract doctors & therapists in each state who have an understanding of female reproductive systems & the effects on swimming . I have known too juniors who have had to give up because they cannot manage . A family GP is not good enough & coaches should be directed to stand back & be directed by said professional.

Regarding Maddie , please consider she has been put on Early Menopause treatments to manage her condition . Its frontier medicine & mistakes & side effects & perhaps emotional outbursts have to be expected.

But she has a definite point about misogynists. However.some swimpractices eg changing on the deck & coaches have to look away .… Read more »

Name names then.. lets not subject the innocent into insinuations and innuendos if youre going to have it out on social media… speculations can be unfair and long lasting

One error I can see in the above article. Horton swims for Melbourne VicCentre, not St Peters Western.

As for the matters touched on:

I’m loving McKeons progress in the freestyle events but I think feel she’s overdue for a breakout swim in the 100 fly ie 55s territory .. we don’t really have a great depth behind mckeon in the fly events so if she can ace this fly event would really help our relay stocks as well

I hope so, she seems poised for a good 100 fly, however, is she concentrating on the freestyle now.

The question that’s *really* on everyone’s mind:
6. Will the later trials (compared to March/April when they’re normally held) actually pay off for the Aussies, or are they eternally doomed to swim Olympic gold-worthy times in trials but miss out on the medals at the actual games?

It hurts the summer swim vibes with extremely boring ,very slow meets for all except Kaylee.( Emma & Madi also had consistently good racing )