Mitch Larkin is Still Deciding Between 200 Back, 200 IM for Tokyo (Video) 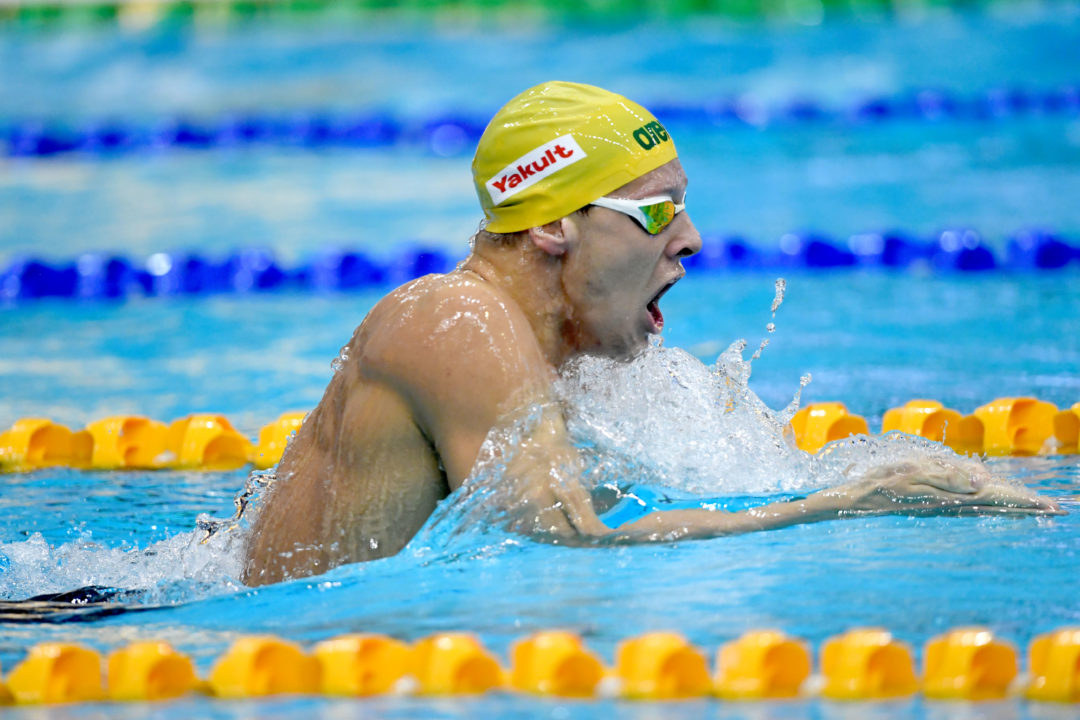 Mitch Larkin says he's going to choose either the 200 back or the 200 IM for the Tokyo 2020 Olympics, and is working through that decision making process. Archive photo via Swimming Australia/Delly Carr

Australian swimmer Mitch Larkin has one of the most difficult decisions to make of all swimmers going into the Tokyo 2020 Olympics: whether to swim the 200 IM or the 200 backstroke, as the two events conflict perfectly with each other in the competition schedule.

Even without a direct conflict on the World Championship schedule, Larkin skipped the 200 back at Worlds.

Speaking after the first session of the first meet in the history of the International Swimming League on Friday, Larkin discussed where he is in the decision making process for Tokyo, and which event he feels has his heart. He says that he’ll probably swim both races at Trials, but that he’ll probably know which he’s going to choose (and that it won’t be both). In the ISL, he’s getting the opportunity to swim both events, albeit in short course.

Larkin is the 2016 Olympic silver medalist in the 200 backstroke and the 2015 World Champion in the same event.

Does anyone else think Mitch is a bit of a hearth throb.. quite a good looking young man and intelligent as well

Apparently most of australia’s top female backstrokers have thought this at one point or another. Only to find that he’s normally lining the next one up at the same time.

Were you one of them or just in the business of defaming behind a computer ?

He was dating Megan nay and cheated on her with a female backstroker I won’t name as I don’t think it’s public knowledge who.

he then dated seebohm and allegedly cheated on her also.

This is common knowledge in Aus swimming

How do you exactly say that he was cheating ?🤔

And even if he did, what business is it of yours? I didn’t know this was a gossip site.

But people were talking a lot about Hosszu and Tusup’s divorce drama here? Why It’s suddenly not OK when it comes to Larkin? Also, Seebohm’s performance has been affected dramatically after their break up, so it’s not totally irrelevant to swimming.

I’m not sure it’s fair to blame her drop in performance on the break up especially when it’s well over a year ago.

You got them Aussie Accent Goggles on.

(That facial hair is…a look, for sure.)

The 200BK and 200IM are hardly unique combinations. Ok, with scheduling you can’t please everyone but what really irks is that the men’s finals in those two events take place consecutively. Why not put them on opposite ends of that evening’s finals program? If there was two hours rest time as opposed to just 30 minutes then maybe Mitch Larkin and others could swim both and do justice to both.

or ditch semifinals for the 200s

Then you couldn’t have a 10 day format at Olympics! (Editorial: who needs a 10 day swim meet besides NBC)

I mean, there are 50s at Fina World Championships, but Andrew hardly won anything there.

NBC have there very own “bought and paid for” IOC member, Mr Gilady who just, by coincidence, happens to (still) chair the IOC Television Commission. Ostensibly representing ISR but his day job is Senior VP NBC Sports

Well that certainly explains all the crap with timing etc

Ah so that’s why everyone else gets screwed over so that Americans can have swimming finals at prime time.

That their TV station doesn’t even show live anyway half the time . Unbelievable