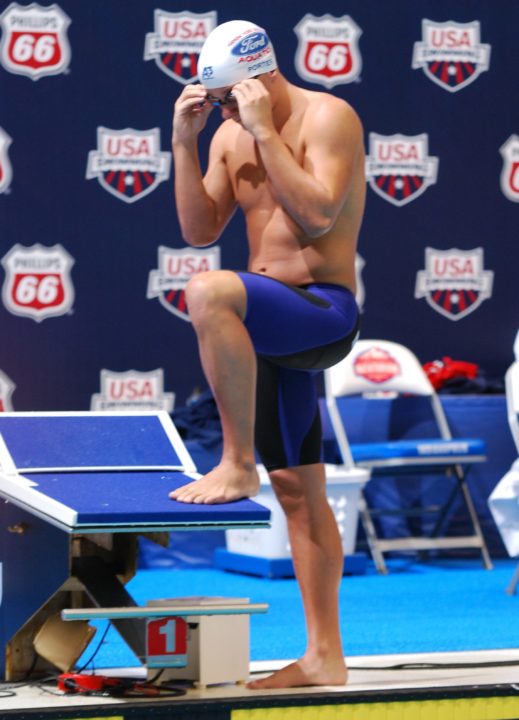 Andrew Porter, formerly a swimmer at the University of Arizona, will make the move to Tempe. Archive photo via Janna Schulze/SwimSwam.com

Bob Bowman and the Arizona State Sun Devils have picked up an important addition for their future. After two years at Arizona*, Andrew Porter will make the move to Tempe, though he’ll use the 2015-2016 season to train for the U.S. Olympic Trials before planning to join the varsity squad in the fall of 2016.

Editor’s Note: we’ve refrained from assigning Porter a class because his ‘years of eligibility’ situation, after two off, is not clean cut, and will have to be decided by the NCAA. He should have 1 or 2 years of eligibility remaining.

Prior to taking 2014-15 off from competition, Porter made some big improvements in his main events throughout his time at Arizona. Here’s a look at his progression:

Having swum with the University of Arizona for 2 seasons, Porter is already familiar with the Pac-12. He will look to be a factor for Arizona State at the conference and NCAA level. Porter was a 3 event scorer at Pac-12s his freshman and sophomore year. He scored in the 200 IM his freshman year at Pac-12s before moving on to become a double event scorer his sophomore year in the 400 IM and 200 fly.

Last season, Arizona State went without any scoring swims at the men’s NCAA Championships. Porter could immediately change that. At the 2014 NCAA Championships, he won the B final with his personal best 45.50. That time would’ve been good for 4th place at NCAAs last year.

He’s also a relay prospect for the Sun Devils. Their fastest 100 butterflier last season, junior Tadas Duskinas, has a best time of 46.10. He also adds depth to their 4×100 free relay. His flat start best of 45.92 from a dual meet doesn’t quite stand out compared to his other events, but he’s put up substantially faster relay splits, including a 44.17 from Pac-12s.

I saw Porter compete back when he swam at CCS championships several years ago. Kicked my butt swimming head to head. He was a stud as a high schooler and I think he’s going to do great things under bowman.