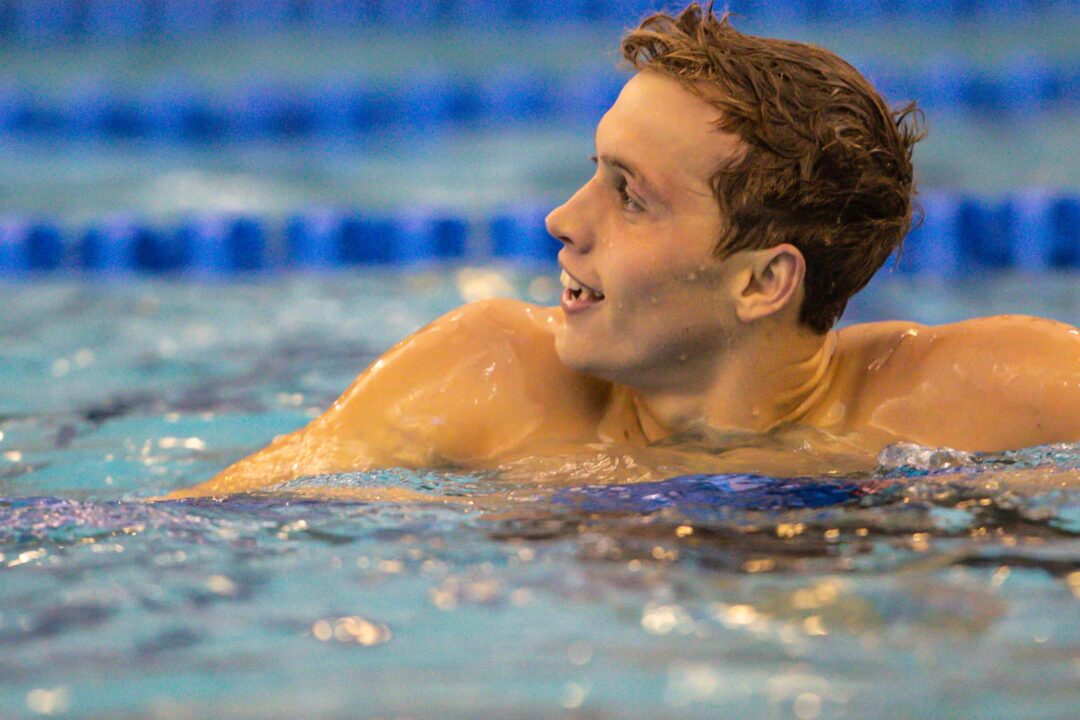 Even though Chase Kalisz and Brendon Smith are back in the pool this summer, is it possible that neither of them will make the 400 IM podium this year? Archive photo via Jack Spitser/Spitser Photography

Chase Kalisz has medaled in nearly every long course World Championships 400 IM since 2013. At Barcelona 2013 he placed second, two years later at Kaan 2015 he won bronze, followed by his first gold at Budapest 2017. The year before Budapest he took silver in the 400 IM at the Rio 2016 Olympics.

Despite reaching the podium in the 200 IM at the 2019 World Championships, Kalisz swam an uncharacteristic 4:15.62 for 10th overall in the event. Since that swim, Kalisz has discussed his debilitating shoulder injury in 2018 that impacted his racing in the years that followed.

After the pandemic, however, Kalisz came back strong and soared to his first Olympic gold medal, hitting a 4:09.42 in Tokyo. Kalisz has been one of the most consistent summer 400 IMers in the world for nearly a decade and will be gunning for a 4th World Championships medal in Budapest.

Even if Kalisz swims faster in Budapest than he did at Trials, it might not be enough to out-swim Foster. Foster has one of the most notable 400 IMs of 2021 despite not racing at the Olympics when he posted a 4:08.46 at a meet in Texas just a few weeks after placing 3rd at Olympic Trials in 2021.

Foster’s swim was the quickest time in the world for 2021, meaning it was quicker than what Kalisz swam to win Olympic gold. The only problem was that Foster’s big swim wasn’t at the right meet.

Aside from Foster’s 4:08 in the summer of 2021, the fastest man in the world since January 2021 is Daiya Seto who swam a 4:09.02 in April 2021. In addition to Seto Kalisz, and Foster, however, a total of 8 men have swum a 4:09 in this event over the past 2 years: Brendon Smith, Duncan Scott, David Verraszto, Alberto Razzetti, Lewis Clareburt, Leon Marchand, Ilya Borodin, and Jay Litherland.

What makes it slightly easy to narrow down our top 8 is that only 7 of the sub-4:10 400 IMers. David Verraszto is not on the Hungarian roster for this event, Jay Litherland didn’t qualify for the American team, Ilya Borodin can’t compete because Russia is banned, and Duncan Scott has pulled out of the meet. So by eliminating those 4, we’re left with 5 men in addition to the Americans: Seto, Clareburt, Razzetti, Smith, and Marchand.

Daiya Seto is the reigning world champion in this event, having swum a 4:08.95 back in 2019 to take the gold medal. His fastest-ever swim in the event came earlier that year when he put up a 4:07.95. So if Seto could get down to his PB range, he would likely be able to clear the majority of this field and snag the medal.

But Seto hasn’t been at his best in the long course version of this event in the past couple of years. His best time since 2020 is the 4:09.02 that he swam in April 2021, which at the time seemed to bode well for his Tokyo 2020 performance. But once Tokyo came around, he wasn’t able to pull it off and he missed the final with a 4:10.52 for 9th overall.

Seto was off at the Olympics and since then, most have attributed his lapse to a poorly timed taper. Since last summer, Seto has had a strong resurgence and powered his way to a double gold performance at Short Course Worlds, winning the 200 and 400 IM. Seto made a coaching change earlier this year, teaming up with Takeshi Kato, Rie Kaneto‘s former coach. Seto has a high ceiling in this event and his short course success indicates that he’s not through with contending for gold yet.

If he nails his taper this time around with newfound coach Kato, Seto could certainly make his way onto the podium and even challenge for gold.

Before June 14, 2022, it would have been much harder to select a podium without Great Britain’s Duncan Scott. Scott didn’t race this event at the Tokyo Olympics, opting to race the 200 freestyle and 200 IM. The 400 IM is certainly not a mainstay event for Scott and he might not race it in Budapest. The fact, however, that he swam a 4:09.18 in April 2022 at British Championships makes it seem like a possibility. But Scott announced just a few days before the beginning of the meet due to post-Covid-19 training struggles.

Another two men who have staked their claims for a medal-worthy position on this list are France’s Leon Marchand and Australia’s Brendon Smith. I ultimately went with Marchand in the #3 spot and Smith at #6. Marchand swam at his debut Olympics last year, hitting a 4:11.16 for 6th place. Brendon Smith on the other hand managed to nad a bronze medal in the 400 IM with a 4:10.38.

While Smith had the upper hand at Tokyo, Marchand has been quicker in-season for 2021-2022. Marchand hit a 4:10.38 in March 2021 just days after winning silver in this event at NCAAs. That makes him #3 worldwide among those racing at Worlds behind Seto and Foster.

Smith wasn’t too far off at Australian Trials when he put up a season-best of 4:11.88 but considering Marchand’s increased speed in Arizona and an in-season 4:09, we’ll give Marchand the edge here.

By choosing Foster, Seto, and Marchand for the podium here, we are predicting a complete turnover of medalists in this event, leaving out Chase Kalisz and Brendon Smith who won gold and bronze in Tokyo, respectively. The silver medalist was Jay Litherland of the USA who isn’t racing this year.

Razzetti will swim the event in Budapest for Italy, but his season-best isn’t where it was last year at this time. Heading into the summer of 2021 Razzetti had already posted a 4:11.17 and this year the quickest he’s been is a 4:13.54. He swam that 4:11.17 at the 2021 European Championships though so the fact that he’s been slower this year might be a result of not having had a taper meet yet.

Clareburt is in a similar position right now, having hit a 4:14.36 in April 2022 as his season-best. Like Duncan Scott, Clareburt was also hit with COVID-19 in June 2022, which might hurt his chances this summer.

One name that you might think we missed for this top 8 is South Africa’s Matt Sates who had a major short course breakout in 2021 including a 1:51.45 200 IM world junior record. Sates also swam to an NCAA title for Georgia in the 500 freestyle before ending his collegiate career a few weeks later. Sates has also swum a 400 IM this year, getting to a 4:11.58 at Mare Nostrum. That puts him at  #9 in the world this season. When the South African roster was released, however, the 400 IM wasn’t included among Sates’ events.

We’ll have to wait and see if he swims this event, but if he does, Sates will certainly be a contender for the final.

Other men who might be vying for a top 8 finish in the 400 IM at World Championships include Japan’s Tomoru Honda and Hungary’s Balázs Holló and Hubert Kós.

Sates is entered in this event

I have faith in Smith. Not for a gold, but for a bronze.

Still devastated his heat time would have won finals in Tokyo but he flubbed it.

Smith will run down a few on the last 100 and get a medal.

I like the podium and it could be switched between the 3. Hopefully Carson wins, he overcomed his mistakes from last year to make the team this year.

Will Hugo Gonzalez swim this event? Seems like shame of he doesn’t after that stunning swim at NCAAs

Agree with the podium folks but not the order: