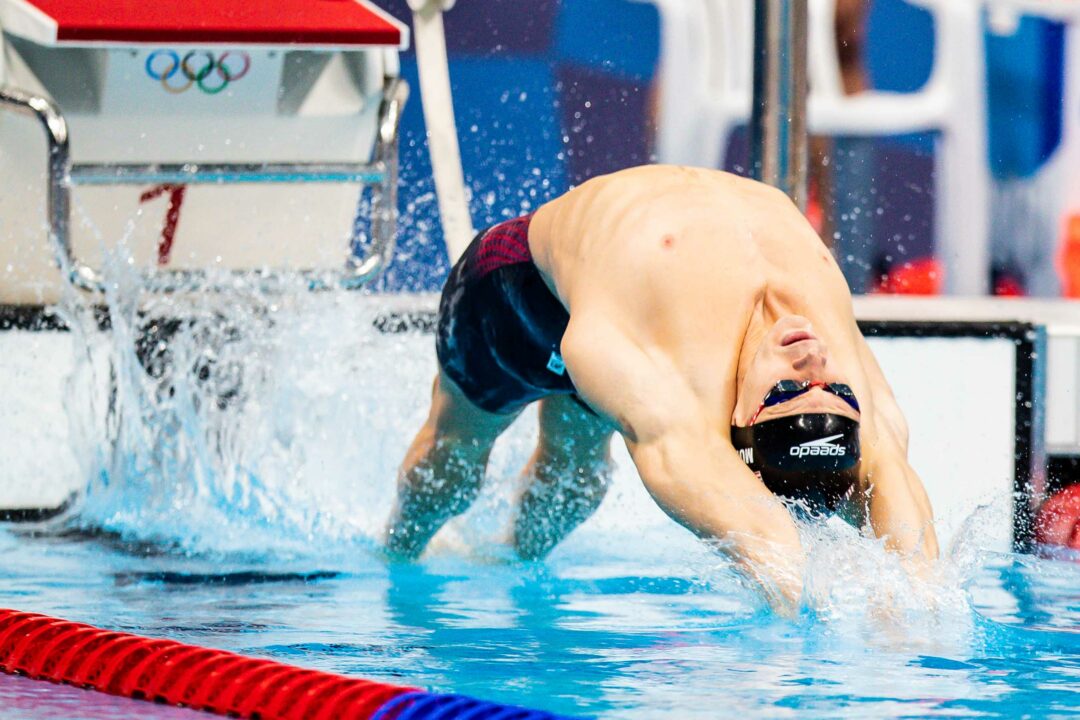 Ryan Murphy hasn't been as active this season as some of his primary contenders, but he's still a gold medal threat in all three men's backstroke events. Archive photo via Jack Spitser/Spitser Photography

2022 was the best year of Kasia Wasick’s career yet, having garnered 5 silver medals from major international meets across the globe

Kharun takes us through each of his individual swims (50, 100, 200 fly) as well as what his first experience competing for Canada was like.

The men’s backstroke races project to be some of the most hotly-contested in Melbourne. The 50 backstroke is the only event where less than half of the final returns from either last year’s Short Course Worlds or this year’s Long Course Worlds. in that event, only three of the finalists from Abu Dhabi return, though seven of the Budapest finalists are slated to race.

Such crowded fields make for great battles, but is hard for predictions. We’ll give it a shot anyway.

In a field that’s littered with returning finalists from the last two World Championships, one big name those lists don’t show is Dylan Carter. The 26-year-old absolutely tore up the 2022 FINA World Cup circuit, winning the men’s side overall and sweeping the 50 back, 50 free, and 50 fly at all three stops. That makes him a serious medal threat, as does the fact that he improved as the World Cup went on, posting his fastest time of 22.72 (also a Trinidad & Tobago record) in Indianapolis. In 2021, that time would have earned him a silver medal.

Two other names to pay attention to that aren’t returning finalists from either World Championship meet are Pieter Coetze and Javier Acevedo. They finished second (24.77) and third (24.97), respectively, at the 2022 Commonwealth Games. With his 24.97, Acevedo brought the Canadian record under 25 seconds for the first time. He followed that up with a Canadian record in short course at the World Cup, hitting 23.20 in Indianapolis.

The American backstroke duo of Ryan Murphy and Hunter Armstrong are scheduled to race as well. Murphy holds a lifetime best of 22.53, which stands as the American record. He was 22.99 in Indianapolis, finishing second as Carter completed his sweep. Armstrong posted a lifetime best of 23.70 at the same meet. He’ll need to drop from that if he wants to be a factor in the final, as he’s shown much more strength in the long course pool thus far in his career.

Returning from the 2021 SC Worlds final is silver medalist Lorenzo Mora, as well as sixth-place Kacper Stokowski and eighth-place Apostolos Christou. Mora holds the fastest lifetime best of the three with the 22.90 he won his medal with, but it’s Stokowski who’s been the fastest this season in 23.01. The other two have both been 23.25, which puts them in a solid position heading into the meet.

Mora’s Italian teammate Thomas Ceccon is also someone to keep an eye on in this race. Ceccon, the long course world record holder in the 100 back, popped a lifetime best 23.22 in Berlin a few months ago.

Shaine Casas swept the 100 backstroke at the World Cup, but he won’t be racing in Melbourne. There’s no shortage of talent though, as the entire field from Budapest Worlds is set to race. That was one of the fastest finals we’ve ever seen, as all three medalists broke 52 seconds, with Thomas Ceccon ripping 51.60 for a new world record.

The Italian competed at all three stops on the World Cup in a variety of races, from sprint free to IM. He’s a versatile swimmer that’s a multi-event threat, and posted a best time in this event in Berlin at 49.62.

With all the finalists returning, we could be set for another blistering final. Of the two American medalists, the one who’s a bigger threat in short course is Ryan Murphy. By his own admission, Hunter Armstrong excels the fewer walls there are, which was one of the big pros for him ending his NCAA career early.

Murphy finished third in Indianapolis behind Casas and Kacper Stokowski. The NC State swimmer got the better of Murphy by .04 seconds, 49.63 to 49.67. Stokowski is the only one of the big contenders in this race that swims in the NCAA, adding an additional layer of complexity for him as he negotiates whatever taper he’s done for the meet. However, he’s looked strong at both the Toronto and Indianapolis World Cups, finishing on the podium both times.

Another swimmer to keep an eye on is Javier Acevedo. The Canadian 24-year-old had a breakout summer, and has rolled that success into the fall season, breaking all three men’s SCM Canadian backstroke records. Based on the 2021 medalists’ times, he will likely need to drop in order to get onto the podium. However, Acevedo’s been on such a roll this season that another best time is not out of the realm of possibility.

With Casas not racing this event and Kolesnikov not able to attend, the only returning medalist is Romania’s Robert Glinta. The 25-year-old holds a lifetime best 49.31, which he set at the 2021 European SC Champs.

There are plenty of other potential contenders in this race, including Apostolos Christou, Ksawery Masiuk, Pieter Coetze, Yohann Ndoye Brouard, and Ryosuke Irie–just to name a few. Any way you slice it, a big name is going to be left out of the final.

Casas collected a World Cup Triple Crown in the 200 backstroke to go along with his 100 backstroke crown. Unlike the 100 back, he will be racing the 200 back in Melbourne. In Indianapolis, he blasted 1:48.40, a personal best which would’ve won gold at last year’s Worlds. His performances this season make him the person to beat in this event, even ahead of defending champion Radoslaw Kawecki.

Kawecki has also notably won a medal in this event at five consecutive SC World Championships, winning four of them. To return to the podium for an unprecedented sixth consecutive time, he’ll likely need to get under 1:50.

Lorenzo Mora comes in flying a little bit under the radar, but could very well be the victor here after setting a new Italian Record of 1:48.72 in November, ranking him second in the world behind Casas.

Ryan Murphy‘s lifetime best is the exact same time as Kawecki’s, though he swam it in 2018. This season, he’s been 1:50.56. Even if Murphy doesn’t get close to his best time, he should be able to lower that enough to contend for a medal. In Budapest, he won his first individual long course world title in the 200 backstroke, beating out Luke Greenbank and Casas.

Javier Acevedo finished second to Casas in both Toronto and Indianapolis. Now, Casas was in a class by himself for much of the World Cup circuit, but in Toronto, Acevedo was able to stick with Casas through 150-meters. He was further back in Indy, but posted a Canadian record of 1:49.74. Acevedo is a threat across all three backstroke distances, and has been having a great season so far. Expect him to take a run at all three of his national records in Melbourne.

The U.S. is known for its backstroke (with good reason) but the French are developing a powerful 1-2 punch in Yohann Ndoye Brouard and Mewen Tomac. Tomac holds the faster lifetime best of the two, with his 1:50.14 from the French Elite Championships. Ndoye Brouard, however, has been right on his lifetime best of 1:50.53 this season, so don’t count him out. Those times put them both right in the mix for a finals lane.

I think Lorenzo Mora is going to be dangerous in all the backstrokes. Italy as a team has been showing up big time when it counts the past few years at all the international meets. It will be tough, but I wouldn’t be entirely shocked to see him win one. The 200 Back is on the last day and Casas has a huge schedule — there’s an opportunity there, plus he is already the fastest this year in the 100 (outside of Casas who doesn’t get to swim it).

Strange that you don’t discuss Greenbank at all (he’s kind of just mentioned as losing to Murphy and that’s it). Silver medallist in Budapest, has a SCM best of 1:48.65 from two years ago (since which he’s set new PRs in LCM) but no SCM time this year.

I’m not saying he’ll win but probably worth a sentence discussing him.

Not in Short Course.

For the men and the women it seems

Some names are likely not to be at their prime anymore in 4 years. Murphy, Xu and Rylov will be 28-29 in 2024. I will be surprised if all three of them are still in at least 52 low form.