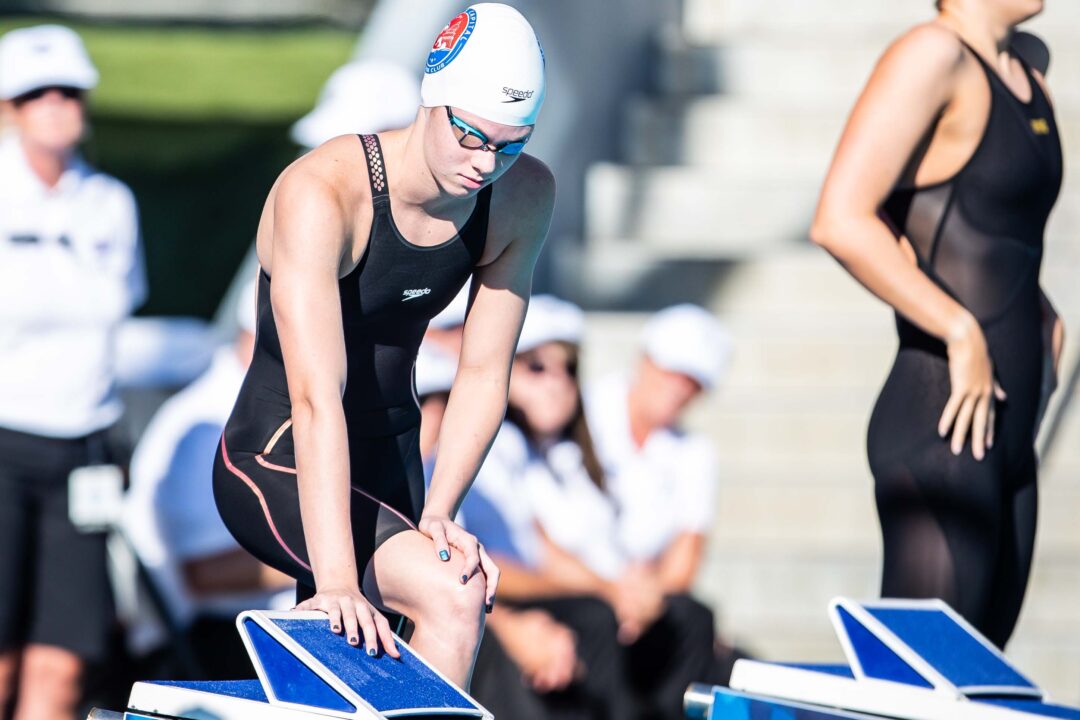 American Erin Gemmell swam a 1:56.14 in the 200 free at U.S. Nationals, which would have been fast enough to medal at the World Champs this summer. Stock photo via Jack Spitser/Spitser Photography

The 2022 Junior Pan Pacific Championships in Honolulu, Hawaii are set to kick off in a few days. Swimmers from 10 countries and territories, including Australia, Canada, Cook Islands, Federated States of Micronesia, Fiji, Japan, New Zealand, Samoa, Singapore, and the United States, are competing in this edition of Junior Pan Pacs.

The start lists for each event have been posted, so this post will be dedicated to detailing some of the highlights we’re looking forward to as we head into the meet. Be sure to check out our boys and girls storylines to watch once they’ve been published as well.

As we examine the entries for these Championships, one of the names that sticks out the most is Flynn Southam. An Australian 17-year-old, Southam has had an exceptional year, breaking onto the national scene within Australian swimming. A sprint freestyler, Southam enters Junior Pan Pacs as the top seed in the boys 50 free (22.39), 100 free (48.54), and 200 free (1:46.77). By seed time, Southam is a heavy favorite in both the 100 and 200 free. The 50 free will likely prove to be his most challenging race, as American 17-year-old Diggory Dillingham is seeded 2nd at 22.48, just 0.09 seconds behind Southam. That being said, Southam gave an interview this spring saying his focus for the summer was on Junior Pan Pacs. Given that, it’s very possible we see Southam’s best racing of the season at these Championships.

The girls sprint events are looking to be a thrilling battle between rising Australian and American stars. The girls 100 free is a particularly tightly seeded event, seeing the top 5 seeds all entered under 55 seconds. Australia’s Hannah Casey leads the pack, coming in with a 54.30, just ahead of USA’s Anna Moesch, entered at 54.33. Erin Gemmell (USA), Olivia Wunsch (AUS), and Milla Jansen (AUS) are all seed as 54s as well.

The roles are reversed in the girls 50 free, where Moesch is the top seed with her personal best of 24.92, which was set about a month ago. Casey is the #2 seed, coming in right behind at 24.96.

After an extraordinary performance at U.S. Nationals a few weeks ago, American Erin Gemmell enters the girls 200 free as the top seed by a huge margin. For context, Gemmell’s 1:56.14 a few weeks ago would have been enough to win bronze at the World Championships earlier this summer. The Americans look strong in the event as a whole, having a whopping 7 swimmers entered under 2:00.

Singaporean Nick Mahabir is another swimmer whose had a noisy summer. Mahabir competes for Singapore internationally, but lives and trains in the United States. At U.S. Nationals last month, Mahabir had a phenomenal meet, taking down the Singaporean Record in the 100 breast (1:00.37). Mahabir enters these Championships as the top seed in both the boys breaststroke events.

Let’s see if any of the female competitors at the 2022 Junior Pan Pacs can break into the top six.

And a combined WC, Comm Games, European Games table too…..

Include swimmers who cannot attend because they were at Worlds.(S
ummer McIntosh for example).A true under 18 virtual championship…no?

A few junior women under :55 this summer. Anna Moesch and Camille Spink

“2022 JR PAN PACS: AUSTRALIA AND U.S. SET FOR THRILLING BATTLES (PSYCH SHEET)“ —> Where is the link to the psych sheet?

Unfortunately, organizers have not produced a single psych sheet PDF, so the only entry list is via the live results (event by event)

Is there a psych sheet? Am I just missing the link?

Unfortunately, organizers have not produced a single psych sheet PDF, so the only entry list is via the live results (event by event)

Not a PDF but close enough: https://pastebin.com/39pt3sXX

Any chance of a livestream or telecast ?

The summer of endless distractions! I can’t say I mind, though, we’re spoiled.

Only a couple of weeks left and then there’s not much for a few months.

I was hoping to see a full on assault at a home 25 worlds but there’s quite a lot of names missing from trials. Doesn’t help that trials is straight off the back of three taper meets.

The field is good enough, the slog throughout the last few months and Junior Pan Pacs doesn’t help at all.
Times will probably be pedestrian, the big guns just want to qualify for Worlds and take a nice break.
And to let the uninformed know (write articles please), Australian SC Championships start tomorrow.
https://www.swimming.org.au/events-results/events/australian-short-course-championships-2022
Psych sheet: https://swimmingausprd.wpengine.com/wp-content/uploads/2022-Australian-Short-Course-Championships-Final-Start-List.pdf
Streaming is, unfortunate.

It really pains me to send money News Corp’s way for streaming.

Same. I’m debating what to do. It’s almost impossible to cancel once subscribed to news Corp. Amazon prime was supposed to have it. That’s what it said in the information booklet.

I already subscribed and they accept Paypal now so you can just cancel it from automatic payments instead of having to phone News Corp.

Blocks don’t have wedges on them. Older blocks too. Racing is what you swim against in the pool, however I don’t expect much if any drops in sprinter events.

I know, so let’s enjoy while it lasts!

Completely forgot these were tomorrow! Can’t wait to see how these youngsters go

It’s in Hawaii, so it will be more Thursday morning Aussie time.

Ah true. At least finals will be on at 1pm (if I did the maths right?) so that’ll be good to watch… if we even can watch it here.