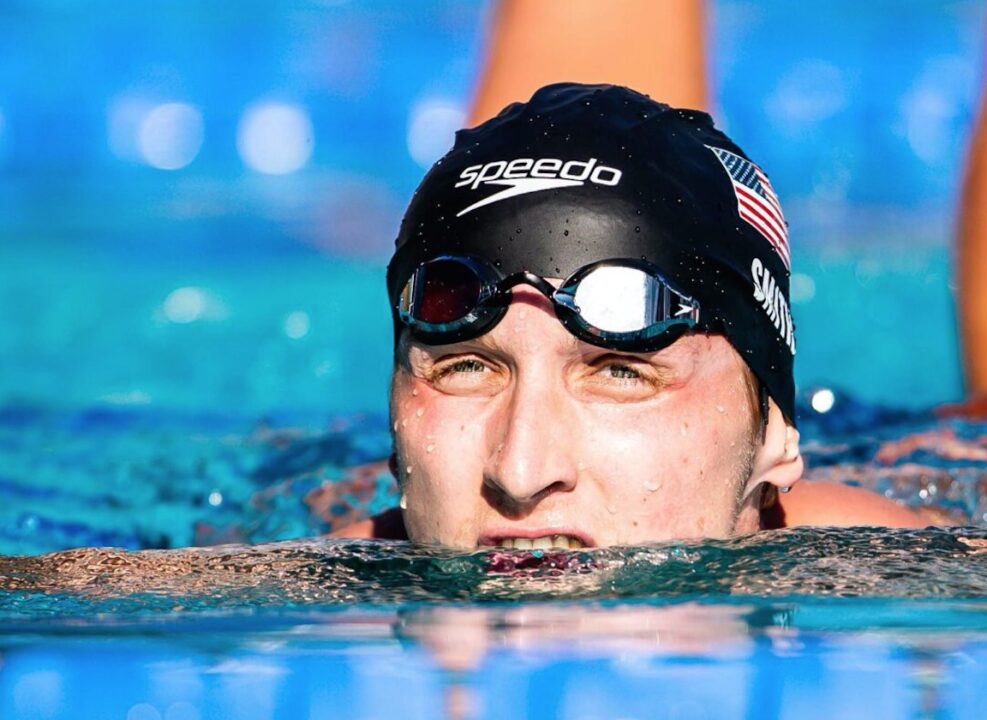 Olympic medalist, World Champion, and  Speedo Athlete Kieran Smith explains why he officially turned pro. He also shares that he’s eyeing another Team USA relay. Kieran’s got the 4×200 free relay dialed-in. He anchored Team USA’s World Championship gold performance, dropping a 1:44.3 split. Kieran would like to develop a top-4 U.S. 100m free time to get on the 4×100 U.S. Olympic relay at 2024 Games in Paris. He has a little under two years to get there. His PB was 49.1 back in 2019. At U.S. International Team Trials he shaved that down to a 48.5.  He’s within range. While he’s not taking his eyes off the 400m free, he’ll be older, stronger, and ideally faster by the 2024 U.S. Olympic Swimming Trials in Indianapolis.  Kieran played the prediction game in this podcast, and he thinks he’ll need to be 47+ to be top-4 at the U.S. Olympic Trials in the 100m free.

Kieran has enjoyed the recent media about Bob Bowman’s Arizona Pro Training Group.  When asked if they topped Florida’s Pro Group, Kieran answered in a round about way stating that a dual meet should hosted. Someone needs to make that happen. ISL feels like a fading dream. A pro duel meet between these two powerhouses would be entertaining.

Thanks to Speedo USA for their support of this podcast.

Anyone else think he kinda looks like he could be related to Ledecky in that cover photo?

Not another good middle distance swimmer turning to sprints 🙁
I think his 200m freestyle is carried by his 400 training. If he drops the 400m for the 100m his 200m will suffer. Also he is the olympic bronze medallist in the event.
If Haas would have continued training for the 400m he would have gone under 1,45

The problem with American 200 freestyle swimmers is bathtub training. 200y swimmers are expected to swim the 200m, but as it turns out, they’re only conditioned to race for 182 meters. That means 18 meters of piano.

I don’t buy this argument. If Kieran wants a 400 medal with another color, he will have to have speed to get there. Nesty and Kieran won’t back off the base work needed to close on the 400.

I cant see anybody getting better in the 400 by focusing in the 100.. Kieran is already faster than Maertens and Winnington in the 200m freestyle and way faster in the 100. Speed is not the issue there

…not the point. He is training for the 400. He’ll gain speed as he has in the past, with age, strength, and more experience. At the end of the day, when you have his range, you can get it done – speed + base. The one thing raw, easy speed provides is the get-out-there-fast big swims. It’s the difference between good and great, and great and olympic hardware.

His new tattoo is brilliant but also incredibly creepy to look at!

Biggest races would probably be:

Marchand in the IMS, Grant House in the frees and 2 IM, Lindsay Looney in 1 fly. Wait another year and you bring Sims in for any race.

I think they are talking pro groups!!

At this point, I wouldnt be surprised if Grimes goes over sooner than later either.

Reagan Smith might want to swim the 100 Back in your scenario. She has a pretty good time.

What is happened to Caleb?