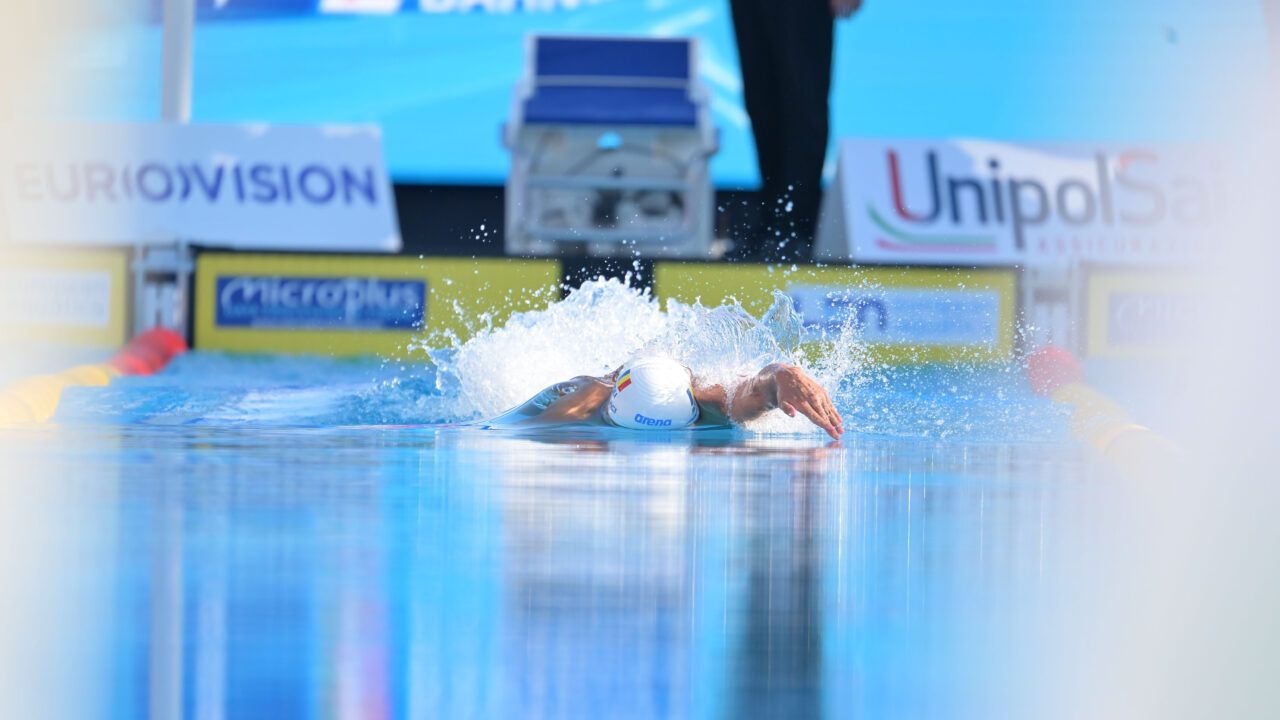 All eyes are going to be on Romanian 17-year-old David Popovici in the men's 200 free final as he attempt to inch closer to the World Record. Stock photo via Fabio Cetti

There were no scratches to report to the day 5 finals session.

We have jam-packed finals session on deck for tonight in Rome, featuring 6 finals and 5 semifinals.

Italy has been dominant in the breaststroke events at these European Championships, and they will look to continue that streak in the women’s 200 breast final tonight. Martina Carraro led semifinals with a 2:23.73 last night, which could theoretically be fast enough to win Gold tonight if she can repeat the performance. Carraro will have a fight on her hands, however, as Switzerland’s Lisa Mamie was just 0.31 seconds slower than Carraro in semifinals.

Greece’s Apostolos Christou led a tight field in the men’s 50 backstroke semifinals. The entire finals heat tonight is separated by just 0.56 seconds, marking what could be one of the tightest finishes we’ll see at this meet. Thomas Ceccon, the World Record holder in the men’s 100 back, who also won the 50 fly earlier in the meet, is someone to keep your eye on.

The women’s 100 fly will see France’s Marie Wattel go up against Sweden’s Louise Hansson for Gold. Wattel was 56.99 in semis, touching half a second ahead of Hansson. Teenager Lana Pudar is another swimmer to watch out for. She’s liable to pop off a 57-point tonight, which could certainly put her on the podium.

Predicting 1:44.5 from Popovici. Seems like he went all-out this meet trying to get the 100 free WR, and it must’ve been exhilarating to the point of being exhausting to finally get it. 200 free probably not his focus.

Interesting! I can buy the reasoning, and the result of being slower than Worlds…the 1.3 seconds slower is what gets me.

Off topic, but I’m not sure where else to post this.

Today marks the 20th anniversary of the first time Phelps broke the 400 IM WR. This is significant because he has held it ever since. He is now only the second person since at least 1950 to hold an individual WR for 20+ years joining Mary T. Meagher who held the 200 fly WR from July 7, 1979 – May 17, 2000. Whether Phelps can get the 10 months or so he needs to break Meagher’s record for longest record likely depends on Leon Marchand.

He’s probably at least a bit tired from going all out in the 100free 3x, He’ll probably still have a 1:43 something, but lets not expect too much

Chlorine Daddy going to be after the textile best. 1.42 high definitely possible.