2022 Commonwealth Games Previews: English Men Will Give Aussies A Run In Relays 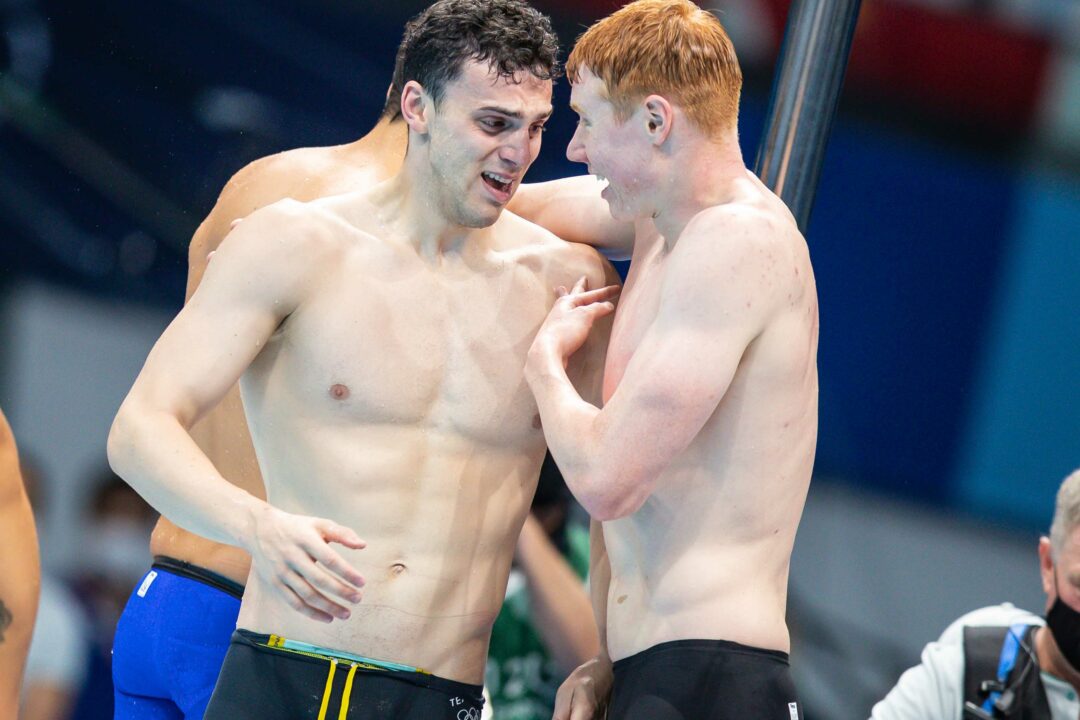 James Guy and Tom Dean will play a crucial role for Team England as they have a chance to dethrone the Aussie relays at the Commonwealth Games. Archive photo via Jack Spitser/Spitser Photography

The Australian men swept the relays four years ago on the Gold Coast, and this year in Birmingham, the English team will vie to do the same on home soil.

Despite not having Duncan Scott available, as he’ll be representing Scotland, the majority of Great Britain’s best 100-meter swimmers will be competing for England at the Commonwealth Games, giving them a great chance to upend the Australians in all three events.

While the women’s 400 free relay is a slam-dunk win for Australia, the men’s race is an entirely different story.

While the Aussies, led by Kyle Chalmers, are the easy pick for gold, it’s Team England that comes in with a very strong quartet capable of pulling off the win on home soil.

Dean split a scintillating 46.95 on the anchor leg of Great Britain’s 400 free relay in Budapest, an event where Whittle had been 47.5 in the prelims. Burras set a British Record en route to clocking 47.63 in the individual semi-finals, and Guy is a proven relay performer, having been as fast as 47.7 (2019) and splitting 48.2 in Budapest.

Using actual relay splits from the World Championships, England could theoretically rip a 3:10-mid in this relay in Birmingham.

Australia, on the other hand, went 3:10.80 to win silver at the World Championships, though they lose their second-fastest leg here in Jack Cartwright.

The three other members are here in William Yang, Matt Temple and Kyle Chalmers, and Zac Incerti will take over the fourth spot after he was dealing with a minor illness early on in Budapest and missed this relay (he ended up missing his best by just a tenth in the individual 100 free).

Even throwing in Incerti’s fastest relay split from the Olympics last year along with the other three’s fastest swims from Budapest, England still holds the advantage over Australia:

The Canadian team is also looking strong, bringing three-quarters of their sixth-place finishing relay from Worlds.

Josh Liendo won bronze in the individual 100 free, Ruslan Gaziev was a semi-finalist, and Javier Acevedo split 47.97 on the relay.

That gives them three elite legs, and then the fourth spot will either go to Stephen Calkins, whose best time is 49.6, or Finlay Knox, who swam a PB of 49.23 in April. Calkins was a late addition to the roster (after briefly retiring) after Yuri Kisil declined his spot.

While they don’t quite have the fourth leg to compete with England and Australia, Canada could end up in the 3:12 range and be a solid bet for bronze.

South Africa has Matt Sates and Chad Le Clos to spearhead their roster, and Guy Brooks and Pieter Coetze will shore them up. Sates swam a best of 48.97 earlier this year, while Brooks is a 49-high and Coetze a 50-low flat-start. Le Clos is capable of splitting 47 if he’s on form.

Scotland lacks depth behind Duncan Scott, while Singapore should be around their 3:18 showing from the World Championships.

Wales is top-heavy with Matt Richards and Daniel Jones, and will have two 50-point guys following them, but the front-end could be enough to snag them fifth.

Cameron Kurle, who set a best time of 1:46.62 last year, is also in contention to snag a spot on the relay.

In what is essentially a toss-up between the two, the edge goes to Australia given their four swimmers are all within a second of one another and it’s easy to see one of them dipping into the 1:44s (while Tom Dean is unlikely to be faster than his 1:43.5).

Canada and Wales are more consistently solid throughout their lineup, while Scotland is spearheaded by Duncan Scott, who has been 1:45.54 this year but could conceivably be two seconds faster with a takeover.

South Africa is a bit of a dark horse, with Matt Sates sub-1:46 this year and Chad Le Clos capable of a fast split. They don’t seem to quite have the fourth leg, however.

The medley relay is also shaping up to be a clash between Australia and England, and right now, the two teams are projected to be very close.

Several variables aren’t factored into those times, including the fact that Adam Peaty would probably be around a second and a half faster on breaststroke had he been healthy enough to race at Worlds.

For what it’s worth, the British medley relay team at the World Championships, which had James Wilby swimming breast and Tom Dean on free (also options for England), clocked 3:31.31 to win bronze.

The Australian team had essentially the same roster as listed above, exchanging in Mitch Larkin for Isaac Cooper, and were a half-second slower, 3:31.81, for fourth.

Given that England has a realistic chance of staying relatively even with Australia on back, fly and free (if Tom Dean is on 46.9 form), they have the edge here with the Peaty factor.

Josh Liendo figures to be the difference-maker for Canada over South Africa, though an on-form Chad Le Clos could keep the South Africans close.

We’ll give Scotland the nod for fifth, given that Duncan Scott is only penciled in as a 48.9 flat-start, and we know he’s capable of splitting in the 46s if he’s on.

The Medley relay should be safe for England. Both the 4×100 and 4×200 free relays could hinge on what kind of form Flynn Southam is in.

I’m surprised to see you think the Medley Relay is more of a toss up than the freestyle relay. I don’t think the medley relay will be close at all. I have England winning by at least a second.

However, Flynn Southam was listed as competing in both the freestyle relays and the mixed free relay, which (unless that was some kind of error) tells me that he is in good form.

The 100 relay will likely include him over Temple. He has a flat start PB of 48.60 which is faster than Temple’s 48.12 relay start even without any improvement. But if they’ve gone with Flynn in the mixed I have to assume he’s going to split at least… Read more »

4×100 is a nightmare to pick. Australia have the fast improving youngster Southam as well as Chalmers who needs no introduction. England have Dean and Burras who seem to be setting 100 PBs every time they race it, and Whittle who has seemed to plateau but could unleash anything. It’ll be a wild one.

For all the non-Aussies, you might appreciate this insight into Australian culture: https://www.instagram.com/tv/CggoMNCDNbJ/?igshid=NDBlY2NjN2I=

ZSC did go a 58:92 in the final of the mixed medlay relay at worlds, which if he repeats again here could bring the Aussies closer to the English (depending on what form Peaty is in!)

If GBR were not being “diluted” into smaller entities; both 4XMED & MX200 would essentially be ‘slam dunks’ for GBR & 4X100 would be a tight call.

Even with the “dilution”, 4XMED is a no-brainer call for ENG.

4X100 is a tight call. I think SS has overlooked the inclusion of Southam who will almost certainly make the finals line-up for AUS. I have some confidence that he may “stand up” and deliver a strong performance but am less sure of the likes of Incerti/Temple and Yang. There WILL come a time with this relay that Chalmers is left in such a situation that even he cannot save the day. A coin toss but I’ll (nervously) give the nod to… Read more »

Please Team GB is not diluted, team GB does not compete in the Commonwealth games, they participate as individual countries.
As a matter of fact great sporting events, the World cup (both men & women), the Euros (both men & women), the Rugby World cup, the netball world cup, the cricket world cup, the they compete as individual countries, even Hockey World cup.
Its only the Olympics & main Olympic disciplines like Athletic & swimming world championships that they compete as team GB.
As Andy Murray the famous tennis player, when he wins he’s British & when he loses he’s Scottish.
Another fact team GB has only ever competed as team GB in the Olympics once… Read more »

You make very valid points that for many sports, GBR splits into the various constituent “countries” but this IS an Olympic sport and GBR is the representative entity for these sports.

And ….. in the context of these particular events; AUS would struggle to be in the same post code against a full strength GBR line-up in 2 of these 3 relays. The reality IS that a key component of both those peak GBR relays is a Scot rather than an Englishman so ….. ergo the ENG relay IS a dilution of the GBR unit.

I think my point stands.

I see the 4X100 med has England having Adam Peaty & they win, not having the Scot means much here as I think both the English swimmers has surpassed the Scot as the premier 100 free swimmer, especially since he is training for 400IM.
As for 4 x 200 agree, the Aussie team cannot compete with Team GB thanks to that particular Scot, but with the Commonwealth it’s only England & they are competitive.