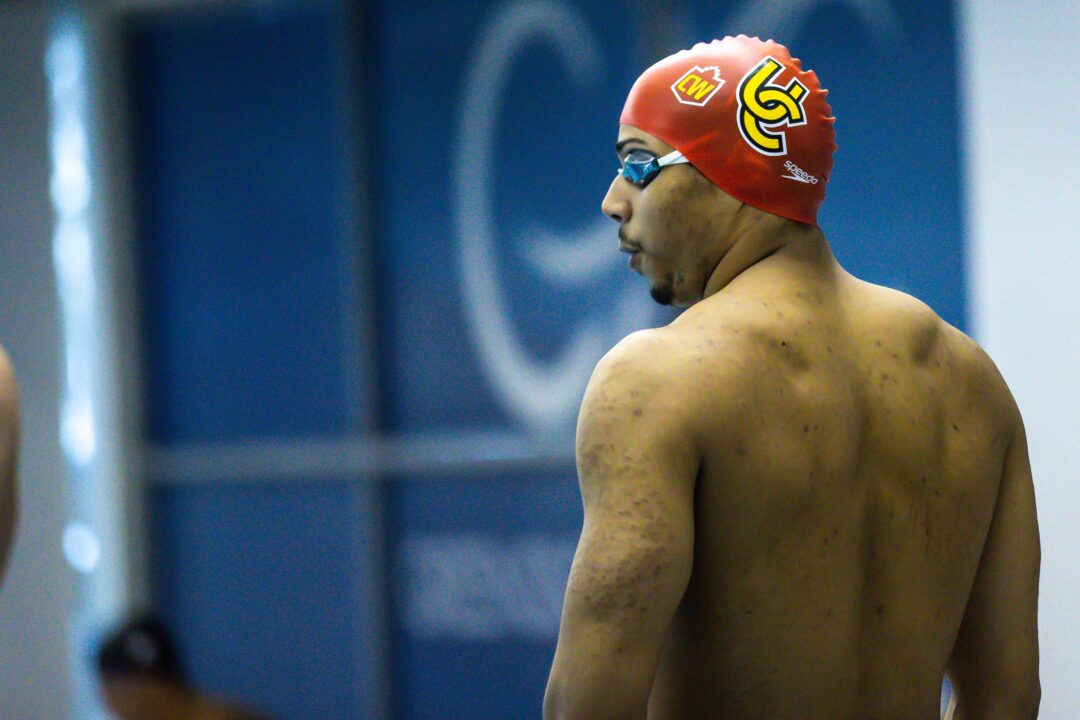 University of Calgary Swim Club's Stephen Calkins has been added to Canada's roster for the 2022 Commonwealth Games as part of the 400 free relay. Archive photo via Jack Spitser/Spitser Photography

Swimming Canada has added sprinter Stephen Calkins to their roster for the 2022 Commonwealth Games after a very, very brief retirement.

Calkins told SwimSwam on Sunday that he gave himself an ultimatum this year: make the national team or retire.

“For the past 6 years, I’ve been on the edge of making one every time, but something always happens to mess it up,” Calkins said with a laugh. “So I retired for about 2 days, then my coach texted me saying that Swimming Canada was asking about me.”

Calkins said that the text from his coach came on a Friday, and a formal invite to the team came on Monday, so he’s back in the water training.

Calkins says that someone declined their spot on the team, but he didn’t know who.

This will be the senior national team debut for the 23-year old. Calkins began his collegiate career at the University of Denver in the United States, where as a redshirt freshman in 2018, he was the Summit League Champion in the 100-yard fly and 200 yard free. He then swam at the NCAA Championships as part of Denver’s 200 free relay that placed 14th – the first All-America relay in program history.

He then returned to Canada to train at the University of Calgary, albeit only on their varsity squad for one season.

While this is his first senior international squad, he did represent Canada internationally at several junior competitions. That includes the 2016 Junior Pan Pacific Championships, where he made the finals of the 100 free, and the 2015 World Junior Swimming Championships.

He will join Josh Liendo, Ruslan Gaziev, Yuri Kisil, Javier Acevedo, and Finlay Knox, the top 5 finishers in the 400 free relay at Trials, on Canada’s Commonwealth Games team. Liendo, Kisil, and Gaziev (prelims) were part of the Canadian team that finished 4th at last summer’s Olympic Games. Two legs of that relay, Brent Hayden (retirement) and Markus Thormeyer (PhD) won’t be on Canada’s teams this summer.

In spite of being a not-very-deep meet, the Commonwealth Games do feature preliminary rounds of relays. In 2018, Canada was 5th in prelims in 3:19.30, even while using distance swimmer Jeremy Bagshaw on that group. That left them 15.28 seconds clear of the 9th-place team in prelims, Mauritius, which swam 3:34.58. That gives top swimming nations plenty of breathing room to play around with prelims relay lineups, though that should tighten up a little with improvements from countries like India and Sri Lanka.

Canada wound up placing 5th at the 2018 Commonwealth Games in this event. The country’s men’s team, and especially this sprint group, has improved dramatically since them, however. That’s especially true with the rise of Josh Liendo, who will be a medal favorite in the individual 100 free this summer in Birmingham.

The GOAT; look out for the return of the double windmill if he sneaks into 100bk.

The man, the myth, and the legend!

Hero of an athlete and gonna be an insane addition to the Dino’s roster next year!