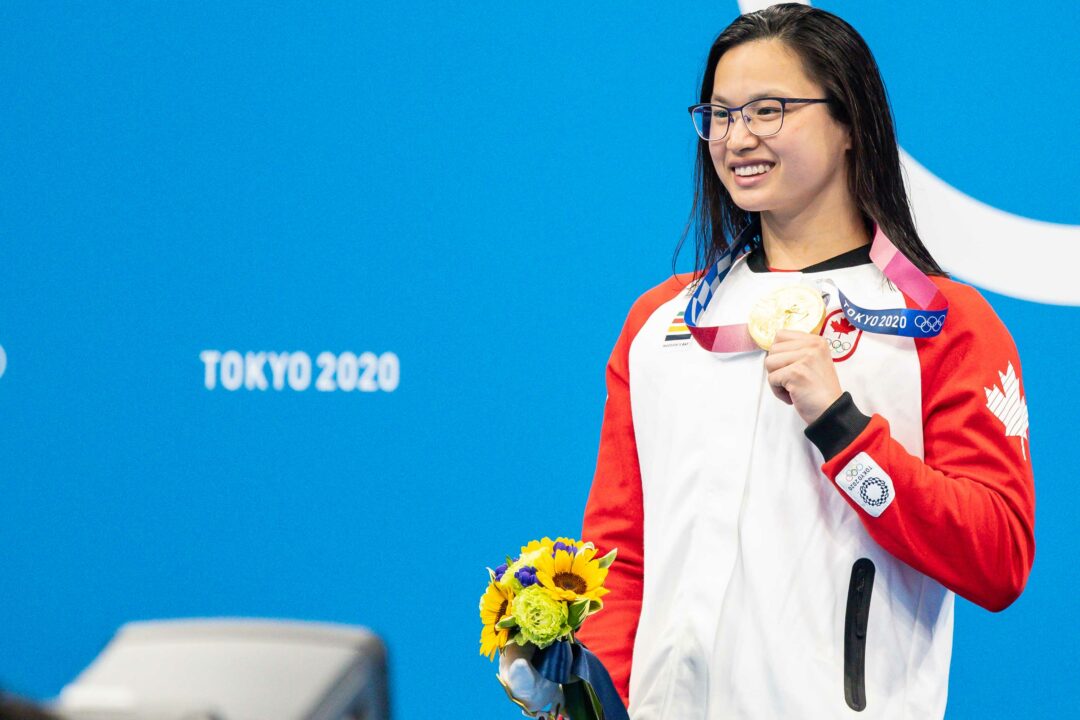 The 2021 Canadian Female Swimmer of the Year Swammy Award goes to Maggie MacNeil, making her the first repeat winner of this award. Archive photo via Jack Spitser/Spitser Photography

The 2021 Canadian Female Swimmer of the Year Swammy Award goes to Maggie MacNeil, making her the first repeat winner of this award.

MacNeil, who competes in the NCAA as a member of the Michigan Wolverines, began her year with explosive performances in the SCY Pool at the 2021 NCAA Championships. During the meet, MacNeil picked up individual victories in both the 100 freestyle (46.02) and the 100 butterfly (48.89), becoming the first woman to break 49 seconds in the latter of the two events. In addition, MacNeil picked up a second place finish in the 50 freestyle and split 49.76 on the backstroke leg (not even her primary stroke! But more on this later) of Michigan’s 400 medley relay. For her efforts, MacNeil was named the CSCAA NCAA Female Swimmer of the Year.

Following a strong NCAA performance, MacNeil exploded in Tokyo, claiming the Olympic gold medal in the 100 butterfly with a blistering time of 55.59 to break her own Canadian Record and become the 2nd fastest swimmer in history in the event. Showcasing her freestyle prowess, MacNeil also contributed a valuable 53.47 split to the Canadian women’s 400 freestyle relay, picking up a silver medal in the process. MacNeil managed to close out her first Olympics with a bronze medal as a member of the 4×100 medley relay, giving her a medal of each color. For her efforts, MacNeil was named the Best Female Athlete of the Tokyo 2020 Olympic Games.

After conquering the LCM and SCY pool, MacNeil showcased her strength in the SCM pool at the Short Course World Championships, putting up a dominant performance. MacNeil finished the meet with a total of 6 medals, including golds in the 100 butterfly, 50 backstroke, women’s 4×100 freestyle relay, and the mixed 4×50 freestyle relay. And, remember how we said she was a really good backstroker, MacNeil picked up her first world record in the 50 backstroke, swimming a time of 25.27 to chop over .3 off of the previous world record. Following her performance, MacNeil expressed her own disbelief of her first world record coming in a backstroke event.

Incredible season for Maggie starting with NCAA’s, Olympics and world’s. Clear cut for sure, however not due to lack of other competitors like in some years past, some awesome women (and girls… Summer), with amazing seasons showing Canada’s rise in the swimming world:
* Summer world 🥈 and multiple 🇨🇦 records
* Sydney world 🥇 and ISL performances
* Tessa world 🥇
* Ingrid Wilm #1 100 back in the world before world champs
* Kayla, Rebecca, and more …

In 2 years Swimswam has to do a “1st Decade Swammy’s” with all the same categories and maybe a few additional ones! Canada’s female has to be Masse, at least at this point. Medals at… Read more »

There’s really little grounds for debating that the CAN women’s team are very much “major league” and USA women should be looking north as well as south-west with regards to peak rivals/competitors. This is NOT to say world beaters or major competitors will not come from elsewhere, far from it, just that these will tend to be more “isolated” cases or a couple/handful per country (or at most 1 relay) rather than the wider spread we are seeing from CAN or AUS. All 3 CAN female relays are certainly medal contenders at very minimum.

BTW, very much concur with your comments on Masse. Admirable consistency and was superb in Tokyo.

True on relays, top 3 nations somewhat solidified. However China and Sweden certainly will have something to say about that.

Congratulations to MacNeil, well deserved! Also impressed with Masse being the only Canadian swimmer to win 2 individual medals at Tokyo in addition to relay medal, excellent performances throughout ISL and multiple individual and relay medals at scm Worlds and several Canadian records set in 2021.

Not for me. Only one individual Olympic event — to be the best swimmer in an Olympic year, you gotta deliver the goods in more than one individual event (or be Peaty-level dominant).

For example, Zhang Yufei was out-touched by MacNeil in the 100 fly, but then dropped a 2:03 gold-medal winning 200 fly. I’d argue that’s more impressive than MacNeil (even when you factor in MacNeil’s SCM performance — that 2:03 was like Agnel’s 1:43, mindblowingly brilliant without being very close to the WR).

One individual gold though. The Australian women (3) won 2 each plus a silver for Titmus and a bronze for McKeon. I’m not sure that a SC WR puts MacNeil ahead of them.

Kaylee McKeown had two individual golds, a relay gold and a relay bronze plus a LCM world record (which, let’s be honest, is worth more than an SCM one).

Titmus had two individual golds and a silver plus a relay, almost taking down a crazy fast super suit WR.

Ledecky won two individual golds plus a silver and a relay as well.

A clear winner with some great honorable mentions