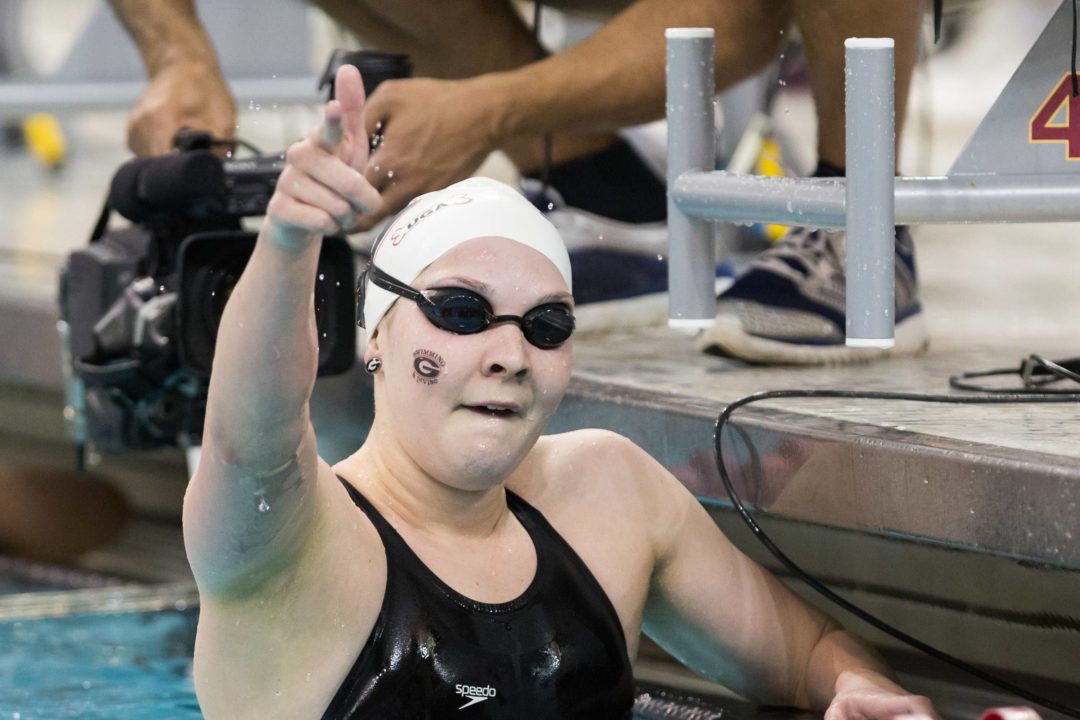 Her multiple national records, success on the NCAA scene, medal performances at international meets, and the fact that she was able to swim best times at four different championship meets throughout the year are what made Brittany MacLean the perfect recipient for this Swammy award. Archive photo via Tim Binning/TheSwimPictures.com

One of Canada’s leading sprinters, Kayla Sanchez has announced that she’ll make the move form Toronto to British Columbia this fall.

The Canadian women had a few standouts this year with five different women taking home individual medals at international competitions, however there was one that stood out above the rest: Brittany MacLean.

MacLean had an incredible season which included multiple Canadian records, a bronze and a silver at the Commonwealth Games, and three bronze medals at the 2014 Pan Pacific Championships in Gold Coast, Australia.

Her international results were impressive, but her 2014 year started out representing the University of Georgia at the 2014 NCAA Championships where she was extremely successful.

One of the best races of the meet came on the first day when Missy Franklin and Brittany MacLean faced off in the 500 freestyle. Franklin was the favorite going in but there was no doubt that MacLean had the experience to put up a good swim considering she’d been in an Olympic final in the 400m freestyle. Through 450 it appeared that the event was going to Franklin but something switched in MacLean and she found a new gear flying home in 25.81 to pass Franklin and take the gold. In the process, MacLean also broke an NCAA record with a 4:32.53.

On day three she won the 1650 in an NCAA record of 15:27.84 to end the competition with two golds (both of which were NCAA records), one silver, and a fourth place finish. She also broke the 1000 free NCAA record en route to her gold medal in the 1650.

MacLean had a very short turn around from the NCAA Championships to perform at the Canadian Pan Pac and Commonwealth Games Trials: the selection meet for the two major competitions that Canada would partake in during the 2013-2014 season. Coming off amazing yards performances, there was a huge change-up that MacLean had to deal with transferring those performances to long course meters.

On the first day of Canadian trials MacLean rocked a 1:57.57 in the 200m freestyle to finish first and come very close to breaking the championship record set by her sister, Heather MacLean, back in 2009. She opted out of the 1500m freestyle final which was swum that same day.

She proved that she was still on top of the world after an amazing 500 at NCAA’s with an incredible 400m freestyle. She touched in at 4:06.20 to finish just over a second off her Canadian record and was just shy of her championship record of 4:06.08.

The following day MacLean had her best performance of the trials racing to a very fast 8:24.91 in the 800m freestyle to break the previous national record of 8:27.59 and grab herself another championship victory.

Between trials and the Commonwealth Games MacLean swam at a few meets including the Mel Zajac International where she won a few events and even got another chance to race Missy Franklin in the meters version of the 500: the 400m freestyle. None of the times were impressive considering it was back to training right after the NCAA Championships and trials for MacLean.

Come the Commonwealth Games MacLean was an absolute staple on the roster. She ended up placing fifth in both the 200m freestyle and 400m freestyle despite being a medal hopeful, although she put up some very solid times. Her 400 was a 4:06.53, just slightly off what she went at trials. In the 200 she was a 1:57.20 which was slightly faster than what she swam at trials.

Her 800m freestyle was the best event of the championships where she faced off against Jazz Carlin of Wales and Lauren Boyle of New Zealand. The three swimmers took out the race together and stayed that way through the entirety of the swim. It was a dog fight to the very end where eventual winner, Carlin, pulled away to swim an 18:18.11 and take home the gold. Boyle was second in 8:20.59 holding off a charge by MacLean who grabbed the bronze in 8:20.91.

Lost in the excitement of the race was the fact that MacLean broke the Canadian record in the event by a whopping four seconds. Four seconds might not be a gigantic amount in an 800, but considering that she had already improved the record by 2.68 seconds in April meant that she had dropped a total of 6.68 seconds off the record in 2014.

MacLean earned herself a silver on the women’s 800m freestyle relay team where herself along with Samantha Cheverton, Alyson Ackman, and Emily Overholt put together a 7:51.67. MacLean had the fastest split on the Canadian team and the third fastest overall at the meet with a 1:56.87 on the second leg.

She ended her Commonwealth Games experience with a bronze, a silver, and a Canadian record.

Going forward, MacLean swam at the 2014 Pan Pacs and did so very successfully. She came home with three bronze medals and yet another Canadian record.

In the 400m freestyle MacLean came within a second of her Canadian record and cracked 4:06 for the first time that season with a 4:05.91. Her time was good enough for fourth and just off the 4:05.33 Lauren Boyle swam for the bronze medal.

Heading into the 800m freestyle MacLean had some stiff competition set up. She had to race world record holder Katie Ledecky who had been on fire during the 2013-2014 season along with Lauren Boyle who had gotten the better of her at the Commonwealth Games. MacLean ended up grabbing a bronze medal in the event behind both Ledecky and Boyle. Ledecky won the event in an 8:11.35 followed by Boyle in 8:18.87 and MacLean in 8:20.02.

With her bronze medal performance MacLean had once again broken the Canadian record in the event dropping a total of 7.57 off the record during the 2014 year.

She came third in the 1500 with a 15:57.17 once again just slightly behind Boyle. That time was also a Canadian record breaking the previous mark held by Brittany Reimer by over 10 seconds.

MacLean also took home a relay bronze leading off the Canadian 4x200m freestyle team with a 1:57.67.

In September, MacLean resumed her studies and swimming at the University of Georgia after an incredible championship season representing her home nation of Canada. She ended the 2014 year ranked third in the 1500, fifth in the 800, 13th in the 400, and 20th in the 200. MacLean was the only Canadian swimmer to break a national record in multiple events during 2014.

Her multiple national records, success on the NCAA scene, medal performances at international meets, and the fact that she was able to swim best times at four different championship meets throughout the year are what made Brittany MacLean the perfect recipient for this Swammy award.

Way to go to an awesome Bulldawg. This should be a great year too!