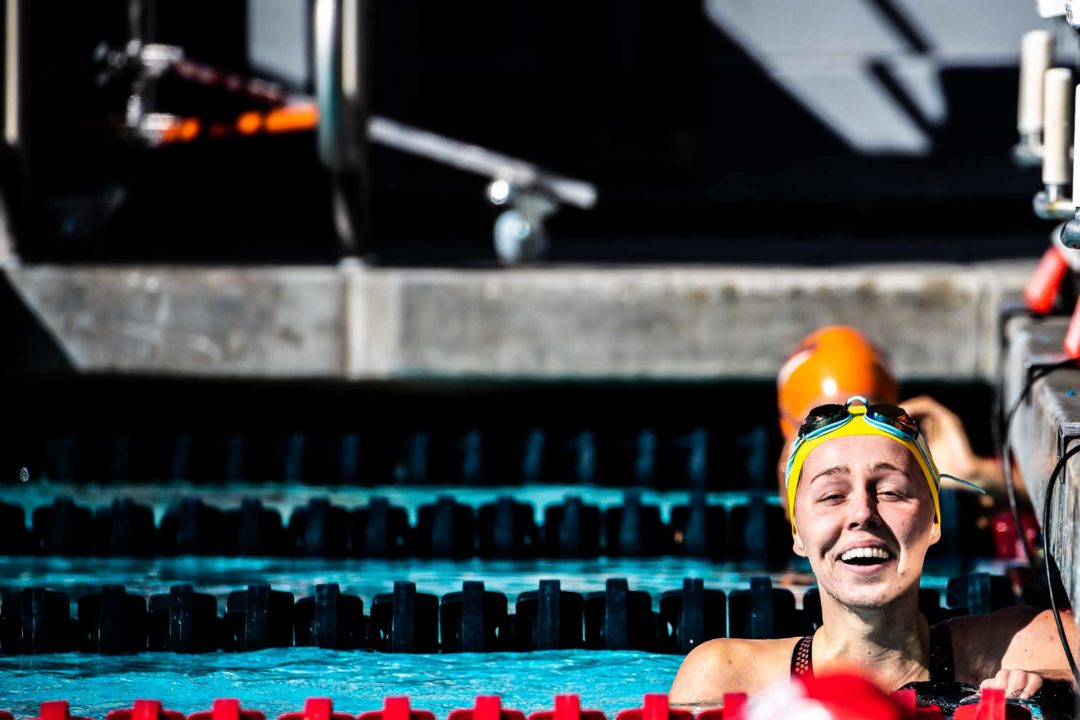 Again, there were fairly minimal scratches for day 2 prelims. In the women’s 200 free, SOCAL’s Samantha Shelton, the #16 seed, has scratched. Cal’s Michael Petrides, the #6 seed in the mne’s 200 free, has also scratched.

200 fly champion Justina Kozan is the top seed in the women’s 200 free. With her 1:58.10 best time, Kozan is the only swimmer in the field who has broken 2:00. Aurora Roghair, who dropped 10 seconds in the women’s 800 last night to finish 2nd, is in the field, and could make some noise if she continues dropping time. The women’s 800 free champion, Jillian Cox, is also slated to race the 200 free this morning.

Fresh off becoming the #9 American all-time in the men’s 200 fly tonight, Cal/Rose Bowl Aquatics Trenton Julian is the top seed in the men’s 200 free. Julian has a best of 1;47.50, and we’ll see if he’s able to put together another lifetime best today, after dropping time in the 200 fly and the 100 free last night.

Schroeder Y’s Ziyad Saleem is the top seed in the men’s 200 backstroke.

13-year-old Kayla Han, representing La Mirada Armada, swam a new personal best to qualify 5th for tonight’s championship final. Her time of 2:03.23 took 0.65 seconds off her previous best of 2:03.88. Han was the only swimmer in the field to clock a lifetime best this morning. The 13-year-old took 4th in last night’s 800 free, coming in just 0.01 seconds off her personal best.

Justina Kozan, the top seed by far coming into the meet, has secured lane 4 for tonight’s final. Kozan swam what appears to have been a relaxed race this morning, just as she did in the 200 fly yesterday. If we can take Kozan’s swims from yesterday as any indication, she’ll be significantly faster tonight, probably even under 2:00. Kozan has a tendency to close races extremely fast, so it won’t be sruprising if she’s right with the field tonight until the final 50, then takes off and breaks away.

Aurora Roghair and Jillian Cox qualified 2nd and 3rd for the A final. Cox won the women’s 800 free last night, while Rogahir came in 2nd. Both swimmer posted lifetime bests in the 800, Cox by about half a second, and Roghair by a whopping 10 seconds. Roghair was 0.34 seconds off her lifetime best this morning, and Cox was approximately 1 second off hers.

Autumn Haebig, the #3 seed coming into the meet,  narrowly made it through to the A final with her swim this morning. Haebig was 3 seconds off her personal best, which she set at the Olympic Trials Wave I meet in June. Haebig was one of the stars of the Wave I meet, so we’ll see if she was just holding back this morning.

Trenton Julian has done it again, swimming a very relaxed front half of his race, and qualifying 1st for finals tonight. As was the case with the 200 fly prelims yesterday, Julian’s 1st 100 was significantly slower than his 1st split from his best time swim. This morning, Julian split 54.70 on the 1st 100, which was the slowest first 100 split by over a second of anyone who made the A final. When Julian swam his personal best of 1:47.50 during semifinals of the 200 free at Olympic Trials, he split 52.97 on the first 100. So, based off yesterday, we can project that Julian will take the race out faster tonight, and we’ll see if that results in another lifetime best for the 22-year-old.

Dominic Margarino also swam a best time to make the A final, touching in 1:51.18 to finish 8th. Margarino dropped 0.47 seconds off his previous best with the swim.

Alec Enyeart of Tsunami Swim Team, who posted a gigantic lifetime best in the men’s 1500 to finish 2nd last night, was at it again this morning, dropping half a second in the 200 free. Enyeart swam a 1:54.54 this morning, qualifying for the 18&under final tonight. In the 1500 last night, Enyeart dropped 30 seconds from his previous best.

Based off this morning’s swims, tonight’s final appears to be USC’s Isabelle Odgers‘ to lose. Odgers was the top seed coming into the meet, and she was the only swimmer in the field to break 2:31 this morning, swimming a 2:29.19. Odgers has a lifetime best of 2:27.67.

Aquajets’ Jordyn Wentzel clocked a new lifetime best to finish 2nd this morning. Wentzel’s 2:31.03 takes 1.39 seconds off her previous best of 2:32.42, which she swam less than a month ago.

Minnesota’s Molly Urkiel dropped over a second to qualify for the A final. Urkiel’s 2:32.12 comes in under her previous best of 2:33.35, which she had just swum in July. 15-year-old Lucy Thomas of Elmbrook Swim Club also swam a personal best to make the A final. Thomas swam a 2:33.44, improving her best time by 2.01 seconds. Her previous best of 2:35.55 was swum in May of this year.

Unattached Illinois 15-year-old Bridget McGann also swam a personal best to qualify for the A final. McGann swam a 2:34.43, coming in well under her previous lifetime best of 2:36.11, which she just swam in July, less than a month ago.

TOPS 18-year-old Claire Chahbandour dropped over 3 seconds from her previous best to finish 12th this morning, qualifying for the B final. Chahbandour has had a massive season in the LCM 200 breast. She entered 2021 with a lifetime best of 2:41.62 from 2019. Coming into this meet, her personal best was 2:38.88, which she swam in April of this year.

Virginia Tech’s AJ Pouch, swimming with Team Rebel Aquatics this summer, swam an excellent 2:11.69 to establish the top swim of the morning by 2 seconds. Pouch is the heavy favorite in tonight’s final, and after finishing 5th in the 200 breast at the Olympic Trials in June, we’ll see if he can swim even faster than he did in Omaha tonight.

Trenton Julian swam this event as well, less than an hour after racing the 200 free. Julian posted a new personal best of 2:16.41 to finish 5th this morning. Coming into the meet, Julian lifetime best was 2:22.96, which he swam at the 2017 Summer NCSA Championships, when he was 18. This was the first time Julian has swum the LCM 200 breast since that meet, 4 years ago. It will be interesting to see if Julian sticks with both his events tonight, or if he scratches one in favor of focusing on the other.

15-year-old Maggie Wanezek from Elmbrook Swim Club took a full second off her previous best to finish 1st in this morning’s heats. Wanezek entered the meet with a personal best of 2:13.37, which she swam in August of 2019, when she was 13. Wanezek is now the #40 all-time performer for 15-16 girls in the LCM 200 back.

Teagan O’Dell swam a 2:13.22 to finish 2nd this morning. After an unexpected win in the women’s 100 free last night, we can project that O’Dell will be faster tonight, but the question will be whether she can get back down to 2:10 or not. Either way, we’re surely set up for a fun race between Wanezek and O’Dell.

Washington State’s Taylor McCoy came in 3rd this morning, touching off her personal best of 2:14.00.

Vera Conic, a 13-year-old, qualified 8th for tonight’s A final. Conic swam a 2:18.66, off her personal best of 2:16.87, which she swam just 2 weeks ago at Illinois Age Group Championships. Conic represents Palatine Park District.

Harry Homans, a USC swimmer, led the way in this morning’s prelims, swimming a 2:02.31. Homans was roughly a second off his personal best with the swim.

Schroeder Y 18-year-old Ziyad Saleem came in 2nd this morning with a 2:02.50. Saleem was the top seed coming into the meet, and was 1.2 seconds off his personal best this morning.

Mission Viejo Nadadores 16-year-old Humberto Najera clocked a new lifetime best of 2:02.86 to finish 3rd this morning. Najera’s previous best of 2:03.68 was swum in March of this year. Similarly, Rose Bowl 17-year-old Braden Beagle dropped time to qualify for the A final. Beagle’s time of 2:05.60 was over a second under his previous best of 2:06.67.

1500 free champion from last nigh, David Johnston, came in 6th this morning, making it to the A final.

I don’t believe that Nora Mirabal time is accurate.

Have some olympians show up to spice things up!