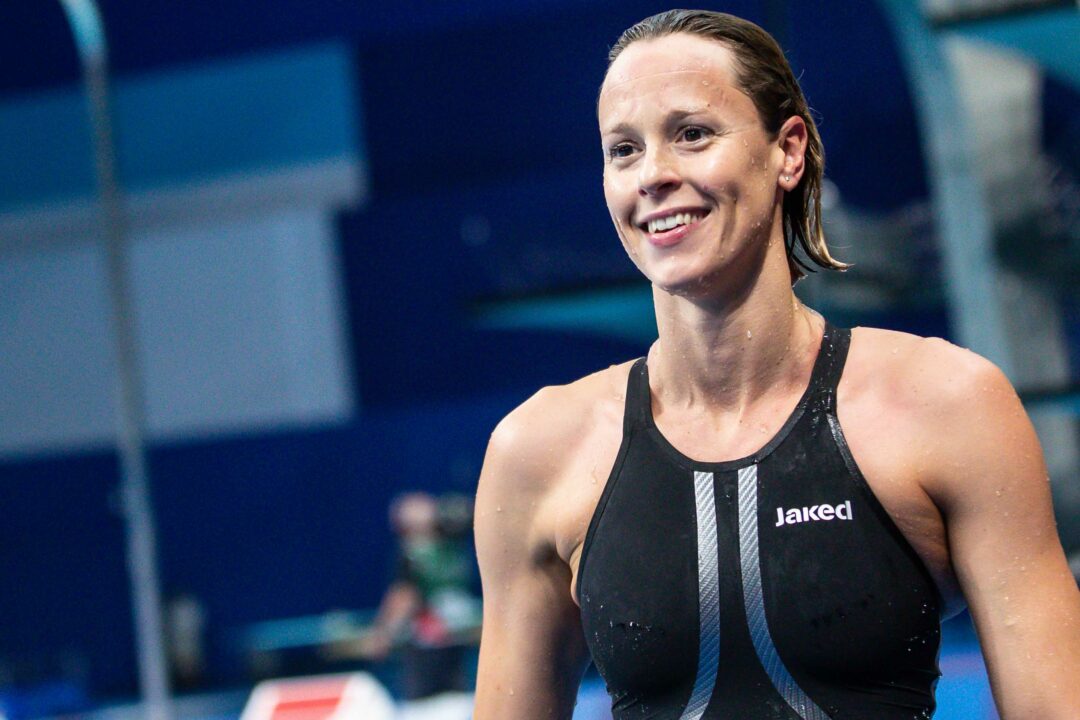 Pellegrini was elected by her peers to the Commission, with 6,825 athletes voting in Tokyo. The 32-year-old has said she will retire later in 2021. Current photo via Jack Spitser/Spitser Photography

The newly-elected athletes, whose term will end at the 2028 Olympic Games in Los Angeles, will join the Commission in representing the athlete voice within the Olympic Movement.

Pellegrini, who announced that she will retire from competitive swimming upon the conclusion of the International Swimming League (ISL) season later this year, raced in her fifth and final Olympic Games last week in Tokyo, becoming just the second swimmer to qualify for the Olympic final in the same event five times (joining Michael Phelps, who did so in the men’s 200 fly) by placing seventh in the women’s 200 freestyle.

“This election opens an important window into my world but in a different role,” said Pellegrini, translated from Italian.

“I am very happy. I will always be connected to the Olympics, in other ways but always with that of an athlete. The future? This was my last Olympics: a very exciting life awaits me outside, maybe a little less tiring.

“What I want to do in the IOC is to always make the life of an athlete easier (as they’re) approaching the Olympics.”

A total of 30 candidates from 30 different countries, representing 19 sports, were up for election.

6,825 athletes at the Games voted between July 13 and August 3, which marks a 61.27 percent participation rate (the third-highest ever). There were 11 different voting locations athletes could go to in Tokyo, including at the Olympic Village.

IOC AC Chair Kirsty Coventry, a seven-time Olympic swimming medalist for Zimbabwe, remarked: “It is fantastic to see the high turnout of athletes participating in the Athletes’ Commission election. We had an impressive list of candidates, and I want to thank all of the candidates for putting up their hands to represent athletes from around the world.

“Congratulations and welcome to the four new members. The work and responsibility of the Commission is as important as ever to represent and support athletes in all stages of their lives. With these new members and those already on the Commission, I know that the IOC Athletes’ Commission is in very good hands to build on the great work done over the years. Remember, you now represent all athletes from around the world, so do your best to better understand all viewpoints, listen, act and support them to the best of your ability.”

The IOC AC election has been held at every Games dating back to 1996.

Coventry, Vice-Chair Danka Barteková, Tony Estanguet and James Tomkins OAM have completed their terms on the AC after being elected at the London Olympics in 2012. Another appointed member, Stefan Holm, is also ending his term.

A new Chair and Vice-Chair will be elected by the IOC AC members on August 6.

I was under strong impression that IOC AC is just another bureaucratic sport organization that drains money that could be directed to athletes otherwise. The committee without real power, influence and voice.
But such impressive turnout of athletes may prove me to be wrong and this committee does do something useful.

It just so the IOC can check a box and pretend that they listen to the athletes. I’m sure anyone who ruffles some feathers only serves 1 term and is out of there.

so Campbell didn’t get enough votes?

No, she was 11th in the number of votes.

There was a huge field….