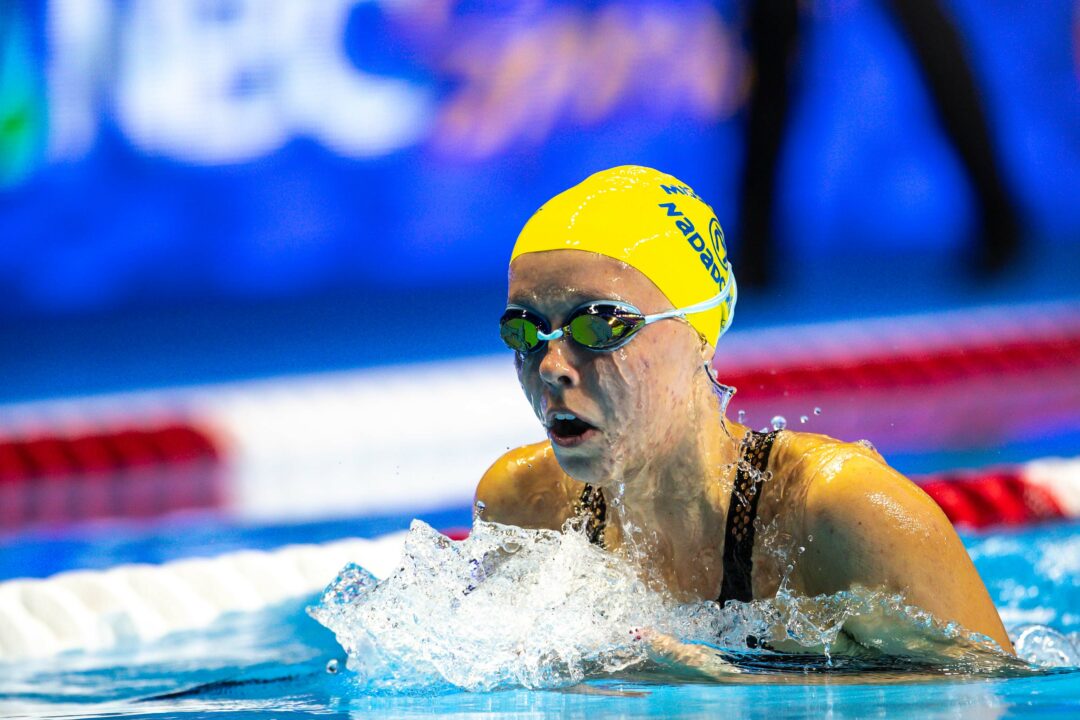 This morning, we'll see heats of the 200 fly and 100 freestyle, as well as one heat each of the women's 800 free and men's 1500 free. Stock photo via Jack Spitser/Spitser Photography

Mission Viejo’s Justina Kozan is the top seed in the women’s 200 fly by a big margin. The 17-year-old wasn’t quite in top form at the US Olympic Trials in June, so we’ll get to see if she’s faster this morning than she was in Omaha. This is the first event in a fairly busy schedule for Kozan this week.

We’ll also get to see Trenton Julian (Cal) in arguably his best event today. Julian is the top seed in the men’s 200 fly, with his personal best of 1:55.35 from Trials. Julian finished 5th in the event at Trials in June. He won’t need to push the pace this morning in order to qualify for the A final, so we may have to wait for tonight to see what Julian’s got in the tank. Like Kozan, this is Julian’s first event in a busy schedule over the course of this week.

Indiana rising sophomore and Irvine Novaquatics swimmer Ella Ristic is the top seed in a tight women’s 100 free field. Ristic enters with a 55.82, ahead of #2 seed Samantha Shelton‘s (SOCAL Aquatics) 56.32. Including Shelton, there are 10 swimmers seeded with 56s this morning.

Cristian Quintero, a native of Venezuela and former USC Trojan, is the top seed in the men’s 100 free. Quintero is seeded with his personal best of 48.94, which also happens to be the Venezuelan National Record. We may not necessarily ne on record-watch this morning, but it’s plausible Quintero makes a run at it tonight.

16-year-old Caroline Bricker was just 0.16 seconds off her best, taking the 3rd seed for finals tonight. The COSA swimmer looks primed for a best time tonight, where she’ll have kragh to go head-to-head with in the middle of the pool.

Rice Aquatics 17-year-old Ella Flowers clocked a huge personal best in the first heat of the event. Flowers swam a 2:17.96, winning the heat by 2.63 seconds. Her time was a 2.69-seconds improvement over her previous best of 2:20.65. it needs to be noted that Flowers’ previous best was swum 2 weeks ago, on July 22nd.

Trenton Julian took the top seed for tonight’s final, clocking a 1;57.35. Julian notably swam the race differently than he did the U.S. Trials in June. This morning, Julian swam a 55.70 on the first 100, compared to the 53.65 he split going out when he swam his personal best. Either Julian is attempting to swim more conservatively on the front half of the race, or we may see him go out much more aggressively tonight.

Schroeder Y 18-year-old Jack Lustig popped off a huge personal best in the heats, winning heat 3 in 2:00.61. That time marks a 3.26-second improvement for Lustig, from a personal best which was set in June of this year. The freshly-turned 18-year-old may be in the hunt for breaking the 2:00 barrier tonight.

Teagan O’Dell, a 14-year-old out of Irvine Novaquatics, posted a new personal best this morning to finish 1st in the heats. O’Dell’s time was a 0.31-second drop from her previous best of 56.65, which she swam approximately 10 days ago. The swim rises O’Dell to #14 all-time in the 13-14 girls rankings, where she is tied with non other than Simone Manuel.

This morning, O’Dell was faster than teammate Ella Ristic, who was the top seed and posted the 2nd-fastest time of the morning. Ristic is still the favorite going into tonight, as her 55.82 personal best is well ahead of O’Dell’s time this morning. Nonetheless, the race between the pair should be exciting.

Elmbrook Swim Club 17-year-old Abby Wanezek clocked a 56.72 to claim the 3rd seed for tonight’s final. Wanezek entered the meet with a personal bet of 56.95, marking a 0.23-second improvement. Wanezek’s younger sister, Maggie Wanezek, a 15-year-old just missed out on the A final, finishing 9th with a personal best of 57.14.

Another EBSC swimmer, 15-year-old Lucy Thomas, swam a personal best en route to qualifying for the A final. Thomas dropped half a second from her previous best with her 57.03 this morning.

Patriot Aquatic Club 15-year-old Annika Parkhe swam a 57.04 to qualify 7th this morning. Parkhe could make some noise in the final tonight, as she swam half a second faster just 5 days ago, at the Illinois Senior Championships.

Fairly unsurprisingly, college swimmers and post-grads filled up the top 8 this morning in the men’s 100 free. The middle of the pool is going to be very tight at tonight’s A final, as Jesse Novak, Destin Lasco, and Cristian Quintero were all within 0.12 seconds off each other, and under 50 seconds.

Luke Maurer was just outside breaking 50 seconds, touching in 50.09. He was still only 0.33 seconds off Novak’s time this morning, so he should be right in the thick of it tonight.

Quintero has the fastest personal best of the field, 48.94, and is the only swimmer in tonight’s field to have been under 49 seconds before.

One thing which is a big factor in 1 1/2 if these kids have parents worked for Disney they could be asked to moved to Orlando Florida. Disney is transferring 2,000 people out of the parks division which includes finance, the imageers(who design the rides), digital technology division to a suburb next to Orlando.

Yeah that’s fair I’m gonna go back in the summer lol I just can’t say it yet lol I think I got a little bit of a bunch more people out tho lol I think I’m going off the next weekend but I’m still not having fun lol I’m sorry.