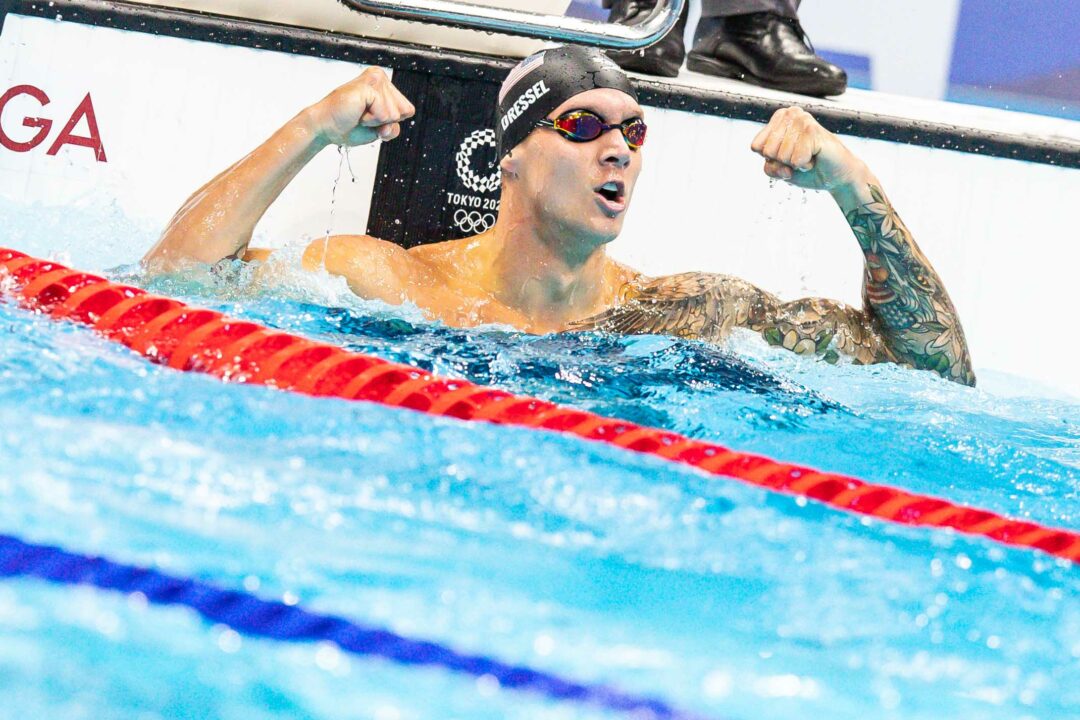 “Congrats Caeleb,” the design of the corn maze reads in the upper right hand corner.

🇺🇸Congratulations Caeleb!🇺🇸 Clay County is so proud of you! Thank you for being a role model where your humility and character shine as bright at your @NBCOlympics Gold Medals! #CaelebDressel #GreenCoveGold #HometownHero #Olympics #Olympics2020 pic.twitter.com/7gIKPsUyHG

“Every year, we try to do something to celebrate something local, or that has some kind of tie to our community,” Amazing Grace Family Farm co-owner Kelly Mosley told SwimSwam over the phone.

“We’ve known that we would have him in the maze …  we were just kind of waiting for the Olympics to happen.

“We’re just so proud of him… and all the things that he’s accomplished. And what a great person he is even more than his medals, his humility, and his character and that kind of thing. So that’s where it came from.”

Amazing Grace has used the organization The Maze Company, which has cut about 300 mazes across the United States,  Canada, and Italy, to design and code the mazes since 2014.

The entire design will be cut into a 5-acre cornfield and within the Dressel design there will be a larger, more challenging maze, and a smaller “kiddie” maze as Mosley called it – one that is easier to navigate.

“We just tell them, you know, what we want our idea to be and usually we send them some kind of picture…

“There’s always like the pictures of him, of him after he wins a race, like throwing his arms up in the air,” Mosley explained about the base of the design.

“And then my sister actually had the idea like, ‘Oh, I wish there was a way that you could put a flag or something like that in there… And that’s how the design came about.”

The image on Twitter is just the design, as the crop maze season is in the fall. Normally they do not release the design until September and the maze opens in October.

“My husband planted the maze last week, “ Mosley explained, “and then they’ll come and cut it whenever it’s just a couple inches high.”

“But we didn’t really feel like we wanted to wait until October to celebrate him and go ahead and share it.”

Once the maze is cut, local stations in Jacksonville plan to use traffic helicopters to capture footage of it. There will also be drone footage, Mosley said.

Amazing Grace Family Farm is run by Kelly and her husband Justin. Every year, a portion of the proceeds from their ticket sales go toward local charities. This year, the maze will benefit Clay High School’s Claire McCool Memorial Scholarship fund.

In the past these charities have included:

“Gosh, I mean, could you think of a better one this year for our hometown hero winning five gold medals?” Kelly said.

“Everybody here in Green Cove is just so proud and so excited and so happy for his family. They’re just such wonderful people.”

“We’re just so proud,” Mosley said. “It’s so cool to think that, you know, somebody from our, our little town in our, our high school where so many of us went to high school is a world-renowned athlete, and we just, we couldn’t be more proud of him. And we’re happy for him and his whole entire family and coaches and his support system.”

Mosley said she shared the design with Dressel’s mom before sharing it on social media, after telling her about the idea a year prior.

“I think she liked it quite a bit from her reaction,” Mosley said.

“But I’m sure there’ll be so much more going on in our hometown whenever he comes home, but this is just another way that … we just want to …. let him know how proud we are of everything that he’s done and how hard he’s worked and representing the United States at the Olympics and just how awesome everybody thinks he is.”

Dressel is not the first U.S. Olympic swimmer to be immortalized in corn; the Casa Grande Dispatch in Arizona cut a corn maze of Michael Phelps in October 2020.