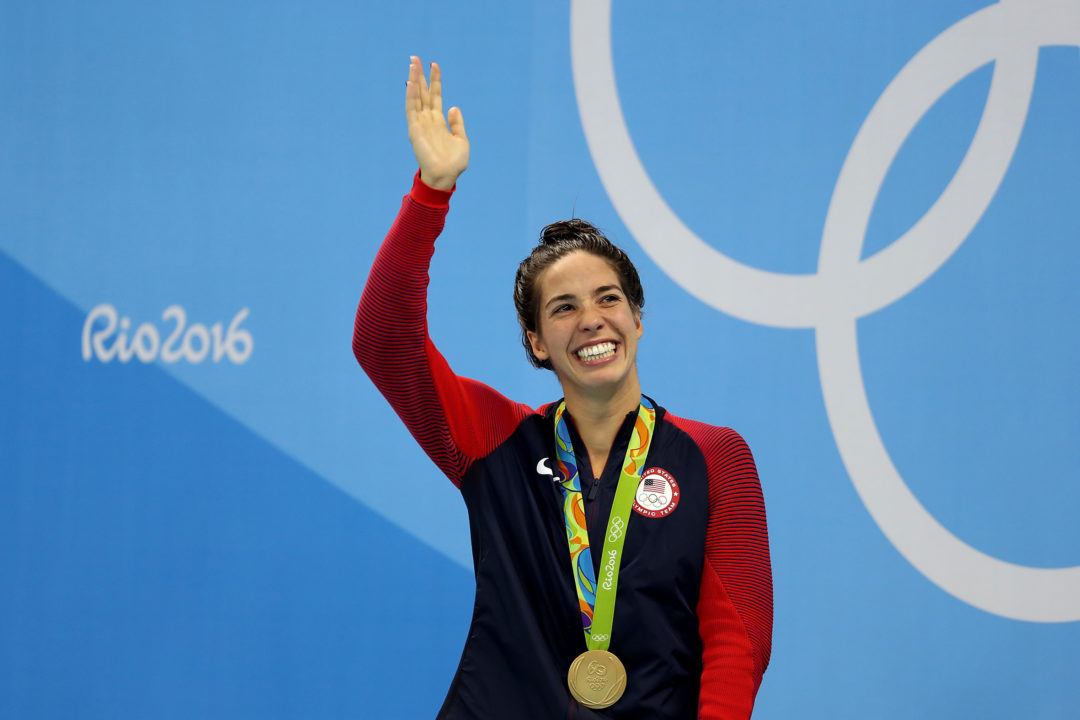 Olympic gold medalist Maya DiRado has announced that she is pregnant with a baby boy alongside her husband Robert Andrews. Archive photo via Simone Castrovillari

DiRado made the announcement over his Instagram page, posting a photo of the gender reveal:

DiRado represented the United States at the 2016 Rio Olympic Games, where she won 4 Olympic medals, including gold medals in the 200 backstroke and 4×200 freestyle relay.

After Rio, DiRado announced her retirement from competitive swimming and went to work at the management consulting firm McKinsey & Company.

Collegiately, DiRado competed for Stanford, where she was a 2-time NCAA Champion, winning both the 200 and 400 IM in 2014. She graduated from Stanford with a Bachelor of Science in Management Science and Engineering in 2014. Following her graduation, she married Andrews in 2015.

Andrews also swam at Stanford, graduating as a 6-time CSCAA All-American in swimming in 2012. While there, Andrews studied Biomechanical Engineering and also worked as a teaching assistant. He currently works as a Chief Technology Officer at the company Zigazoo.

Your going to have a baby boy.

0
0
Reply
Measles had a vaccine too

Disappointed to see the amount of dislikes on this post. Anti vaxxer presence is strong on swimswam…

plot twist: rob is the dogs name and winston her husbands name

Congratulations and wishing much happiness

MA made her relevant again

then made himself irrelevant in just 30.69 seconds….

then made himself relevant with a Gold medal and WR

I’ve never seen someone living a more perfect and complete life than Maya. Well deserved of course, but I can’t be the only one who’s a little jealous!

I think Deepblue beat you to that one

Had she been trying for years and years with no success? Why is there an article bout this? This is not special or relevant in 2021.

True to your screen name.

Wishing the baby good health, love, and a lifetime of happiness.

People are downvoting well wishes for a BABY? Tough crowd.

My theory why people downvote engagement/pregnancy posts is because many commentators wished they could’ve been the one to have X swim star’s kid because of that star’s incredible genes. Instead those genes will be going to some other person’s kid.

well judging by the votes your theory isnt much agreed with. genes my ass

You can disagree with the way she handled the Andrew situation and still be happy for her that she is having a baby. It’s possible to hold two thoughts in your head people!