2021 M. NCAAs Preview: Can Michigan Recreate Their Big Tens Magic in the 200MR? 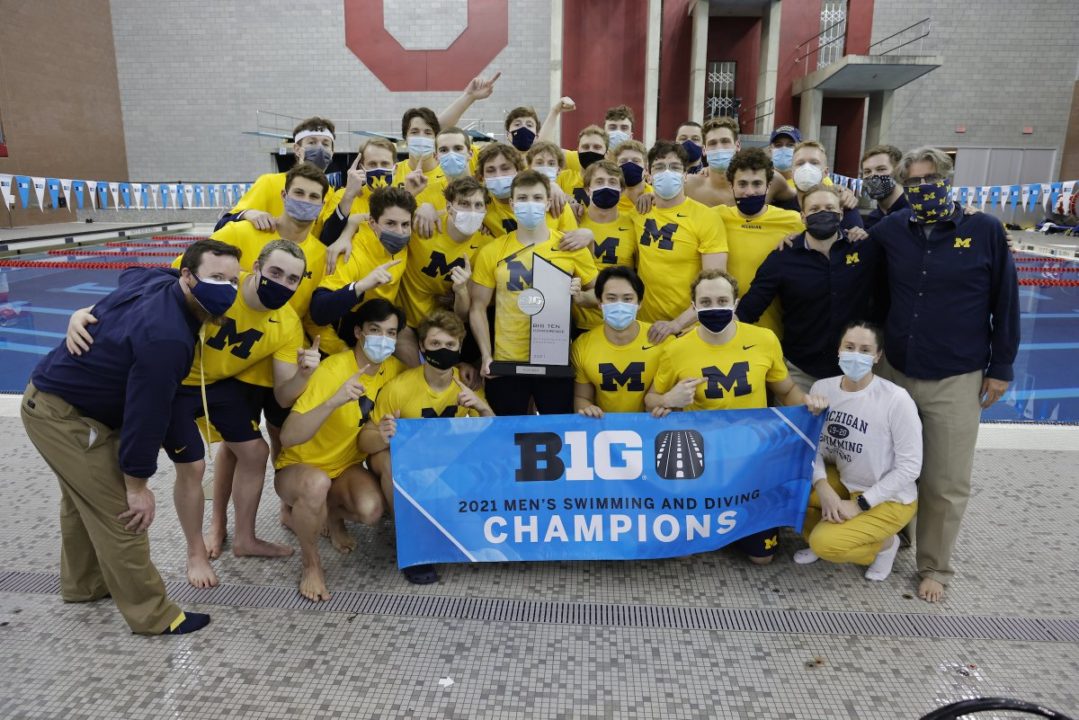 The Wolverines put on a show in the 200 medley relay at the Big Ten Champs, breaking the meet record and swimming the fastest time in the NCAA this season. Stock photo via Michigan Swimming and Diving

The Michigan Wolverines put on a show in the 200 medley relay at the Big Ten Champs, breaking the meet record and swimming the fastest time in the NCAA this season. The 200 medley relay will take place at the end of the day 3 finals session at this year’s NCAAs.

The Wolverines will be in the fastest heat of 4, along with ACC champs Louisville, Pac-12 champs Cal, and SEC champs Florida. At Big Tens, freshman Wyatt Davis led Michigan off in 21.07, which was the 7th-fastest backstroke split across all the conference meets this year. The real strength of this Wolverines relay comes from the middle 100, however, as Will Chan threw down a 22.67 breast split, and River Wright swam a 19.88 fly split at Big Tens. Chan was the 2nd-fastest breast split from all the conference meets, but, the leading breaststroker was Minnesota’s Max McHugh, and Minnesota didn’t qualify for NCAAs in this relay, which leaves Chan as the fastest breaststroker in this field going in. Wright’s fly split was the 4th-fastest across all the conference meets.

The key to Michigan winning this relay may reside with the anchor, Gus Borges. If the first 3 swimmers can match their Big Ten splits, Michigan will likely have a lead at going into the free leg. Borges swam an 18.73 on the 200 medley relay at Big Tens. Individually, Borges was a little off his lifetime bests in the 50 and 100 free, but that may have been because of the 2-week quarantine Michigan’s athletes had to adhere to in late January and early February. We know Borges can be a tick faster, because he split 18.53 anchoring the 200 free relay at Big Tens. Borges’ leg will be so critical to the Wolverines because of the plethora of 50 freestylers in the NCAA this year who can split mid and low 18s on the relays.

The next fastest seed is Louisville, who kicked off their phenomenal ACC Champs with a 1:22.71 in this relay. Similar to Michigan, Louisville had an excellent front half of their race. Mitchell Whyte led off in 20.79, which was the 3rd-fastest back split from any of the conference meets, and he was followed by Evgenii Somov with a 22.91 breast split, which was the 4th-fastest breast split from any conference meet. Freshman Dalton Lowe provided a 20.25 fly split, while Abdelrahman Sameh anchored in 18.76. Louisville was 0.04 seconds faster than Michigan at the 100 mark, but where they’ll need improvement to maintain that lead is on the back half.

#3 seed Cal was led off by Daniel Carr in 21.11 at Pac-12s, with Reece Whitley posting a 23.38 breast split, Ryan Hoffer was 19.87 on fly, and Bjorn Seeliger anchored in 18.38. The Bears are boosted by the freshman Seeliger, who had the fastest medley anchor split out of all the conference meets this year. Hoffer’s fly split was the 3rd-fastest in the entire field, giving Cal a force of a back half on this relay. There is a little room for improvement from Carr on the lead-off, as he split 20.92 leading this relay off for Cal in 2019. Cal’s hopes in taking the title in this relay may be hinged on whether Whitley can get down into the low-23 range, or a little faster.

Florida rounds out the fastest heat with their season best of 1:23.17. The Gators were fueled by excellent splits from freshman Adam Chaney on backstroke, and junior Will Davis on freestyle. Chaney led off at SECs with a 20.72, which was the 2nd-fastest back split in the entire field of conference meets. Davis anchored in 18.65, which was on the faster end of anchor splits year. Davis also proved he could be counted on for that split, as he also split 18.6 on the 200 free relay later in the meet. Dillon Hillis was 23.26 on breast for Florida, while Eric Friese swam a 20.54 on fly. If the Gators are going to make a run at winning this relay, it will have to come from improvement in the middle 100.

The 2nd-fastest heat of this relay is unbelievably tight. Texas, Ohio State, Texas A&M, and Alabama are all within just 0.07 seconds of each other, and A&M and Bama are tied at 1:23.28. Texas is chasing another NCAA team title, and this relay could be the most important for the Longhorns, since they’re seeded 5th, which gives them room to move up. Chris Staka led the team off in 21.03, with Caspar Corbeau splitting 23.39 on breast, Alvin Jiang was 20.10 on fly, and Daniel Krueger was 18.69 on free. The Longhorns could opt to put Austin Katz on this relay in place of Staka, but there’s no guarantee he would be faster. Katz is the 3rd-fastest 200 backstroker of all-time, but he’s more oriented around endurance backstroke than he is sprinting. It’s possible that the performances in the individual 100 back on day 3 could be the determining factor in the Texas coaching staff’s decision for this relay.

Ohio State was 2nd at Big Tens with a 1:23.27. Hudson McDaniel provided the Buckeyes with an excellent 22.97 breast split, and Semuede Andreis anchored in 18.43. Andreis was the 2nd-fastest anchor split across all conference meets, and Hudson was 5th among breaststrokers. Colin McDermott led off in 21.25 on back, and Justin Fleagle split 20.62 on fly. Fleagle split a sizzling 8.95 on the 1st 25 of his 50 fly on the relay, which may indicate that he could be a little faster this time if he can maintain his speed coming home.

Texas A&M’s strength in this relay comes from Shaine Casas, who led off in 20.61 at SECs. Casas’ split was the fastest among backstrokers at conference meets this year, which gives the Aggies a great advantage right out of the gates in this event. Tanner Olson split 23.26 on breast, Jace Brown was 20.50 on fly, and Mark Theall was 18.91 on free. Casas will almost certainly give the Aggies a lead at the 50 mark, so it will be up to the other 3 legs to hold that lead.

Alabama tied with A&M for 2nd at SECs, clawing back from an early deficit. Matthew Menke led off in 21.03, with Derek Maas swimming 23.35 on breast, Colton Stogner swimming 20.29 on fly, and Matt King anchored in 18.61. The Tide may be able to get a little more out of King on the anchor, as he swam 18.9 twice from a flat-start at SECs this year.

Darkhorse: Indiana – The Hoosiers are seeded 9th, so they will be the top seed in the 3rd-fastest heat of the relay. IU had Brendan Burns lead-off the relay at Big Tens, but they may choose to swap him out for Gabriel Fantoni at this meet. Fantoni has been 20.95 leading off before, while Burns was 21.31 at Big Tens. Zane Backes swam breast for IU at Big Tens, splitting 23.22. We can expect Backes to be a tick faster at this meet, since he split 23.08 at last year’s Big Tens on the relay. Tomer Frankel was 20.13 on fly, and Jack Franzman anchored in 18.69. Franzman has been a terrific relay swimmer for the Hoosiers during his career. He also split 18.59 on the 200 free relay at this year’s Big Tens, indicating he may be slightly faster on the medley at NCAAs.

EZ answer – NO way. Meeechegun already tanked in the 800 FRR which was sorta predictable. They might get 5th or 6th if they hit good starts. Bank on that prediction.

It’s always a coin flip with Big10 teams, and hitting a second taper. It’s always such a dog fight for the conference title. I’m pulling for Mich and Ohio State to do well, but have much more faith in Cal/Texas (on the whole).

Cal got 2nd in this race in 2019 and returns three of the legs that were on that relay, plus Seeliger, who has proven to be one of the fastest 50 freestylers in the NCAA already. If they’re at least in contention after the first 100, no one’s going to catch Hoffer and Seeliger on the back half. My moneys on the bears

What about Georgia tech?

I think Michigan can pull it off. I just dont see the half second deficit on breaststroke between Whitley and Chan being surmountable, especially when the rest of the relay is pratically on par with each other.

I will be surprised if they repeat that performance.

Michigan women just swam great at NCAAs and had the same Covid layoff. We will see. Of course, the women didn’t swim as well at B1Gs… and the men crushed their taper at B1G.

My personal pick is Michigan. I think the breast advantage of Chan over Whitley will greater than the free advantage of Seeliger over Borges. So it will be up to either Hoffer to pull away from Wright, or the Cal backstroker to be a few tenths faster than Davis.

I can also definitely see Louisville taking this, which I think would be really fun to see. I give Texas a shot, but it’s an outside shot to me

Verified, we overruled Spencer on this one 😐