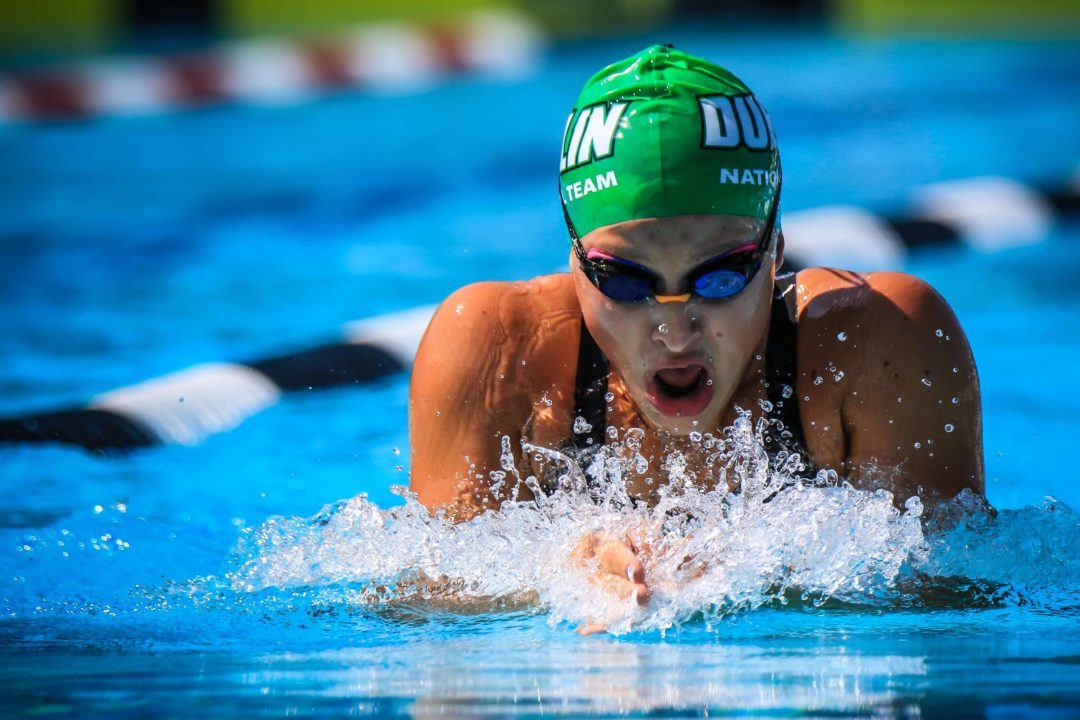 The 2020 Ohio High School State Swimming & Diving Championships will this Wednesday at the C.T. Branin Natatorium in Canton, Ohio. The girls from Mason High School will look compete to claim their third-straight state team title, while the Saint Xavier boys have a chance to secure their 12th title in a row.

Huddleston will also be a key member of Upper Arlington’s top seeded 200 and 400 freestyle relays, along with their fourth seeded 200 medley relay.

Along with the 50 free, Nicola Lane also holds the top entry time in the 500 free with a 4:47.92. The Centerville senior will be up against last year’s top 2 finishers Paige McCormick from Hudson and Maya Geringer from Dublin Jerome. At last year’s meet, McCormick took gold with a 4:48.90, Geringer silver with a 4:41.74. 2019 bronze medalist, Grace Hastings from Cincinnati Anderson returns this year as 6th seed.

In the 200 IM, reigning champ Ellie Andrews from Dublin Coffman has a chance to reclaim the title. Last year she was the only girl to dip under the 2-minute mark, taking gold in 1:59.73. West Chester Lakota West’s Paige Striley sits at second seed and 2019 bronze medalist, Reese Lugbill returns as third seed.

For the diving event, Powell Olentangy Liberty junior Olivia Lynch’s current season best of 510 puts her handily in the top spot going into the meet. Second seed Julia Fidanza trails by 16.2 with 493.8, with third seed Emma Skinner of Upper Arlington entered with a 472.30. Lynch and Fidanza’s season bests are already higher than last year’s top two performances from Morgan Southall  from West Claremont (479.55) and Maycey Vieta out of Gahanna Lincoln (474.40).

Reigning champs, St. Xavier go into the meet with 6 top seeds and seem like they have a good shot to defend the title. Individually, Scott Sobolewski is entered first in the 200 IM and 100 breaststroke with a 1:49.22 and 54.54, respectively. Last year, Sobolewski swam the 5th fastest final time in the 200 IM but swam in from the B-final, giving him a 9th place finish.

As a junior last year, St. Xavier’s Jean-Pierre Khouzam took gold in the 100 fly and returns as top seed with the only sub-48 time of 47.61.

Other top seeds looking to claim titles for their team include Jacob McDonald, reigning 500 free champ, Aaron Sequeira in the 50 free and Hayden Jay in the 200 free.

Jake, on the other hand won the 200 IM and 100 breast and both brothers took gold in the 400 free relay along with Ansel Froass and Noah Patterson. Having both graduated since last year’s meet, the Fosters will be a notable absence at this year’s meet.

On the men’s side, the diving event will feature 2017 Junior Pan American bronze medalist in the 3 meter, Noah Duperre. His 1 meter season best is a 674.20. The New Albany senior will be a favourite to win, surpassing second seed, Sam Sulek of Delaware Hayes by 157.95.

On the girl’s side, Nyah Funderburke is top seed in two individual events and will likely play a part in Columbus School For Girls’ third seeded 200 medley and 400 freestyle relays. Funderburke will go in first in the 100 fly with a 54.77 and the 100 back with a 54.58 as the sole sub-55 swimmer in each event.

Last year’s 50 freestyle silver medalist, Mairin O’Brien from Shaker Heights Hathaway Brown is entered as top seed in both the 50 with a 23.02 and 100 freestyle with a 50.23. Right on O’Brien’s heels will be Cincinnati Hills Christian Academy’s Jessey Li as second seed in the 50 and Cincinnati Seven Hills’ Ella Jo Piersma in the 100. Li is also third seed in the 100.

In the 500 freestyle, reigning champ and sophomore Tori Culotta of Gates Mills Hawken sits as second seed at a 5:00.12, with Audrey Conley from Waynesville is entered first with 4:58.78. Last year, Culotta took the top spot in a time of 4:51.02 and will seek to re-claim her crown. Culotta’s teammate Sylvia Stewart-Bates will go in third at a 5:02.71.

Following a bronze medal performance in 2019 200 freestyle, Ella Jo Piersma will have a shot at gold with a top seeded 1:50.08. Piersma has a strong bid for gold with an entry time more than 2 seconds ahead of the field. A junior at Shaker Heights Hathaway Brown, Ellie MacPhail, follows as second seed with a 1:52.51. Piersma’s teammate Jocelyn Spanbauer is entered third with a 1:52.86.

Luke Paxton will come into this meet strong with two number 1 rankings for Hamilton Badin. His 1:40.68 200 free and 49.82 100 fly are fast enough to get him the top spots. This year a junior at, Paxton came 2nd and 6th in those events, respectively last year.

Defending 100 free champ Will Rose of Alliance will get a shot to make it two years in a row as he is entered with the only sub-46 time. Despite his greater than a second lead, Rose will face stiff competition from Pierce Katai, Matt Brunsky, and Aiden Morris who sit 2nd-4th, with times of 45.59, 45.62, 45.67.

Rose is not only the fastest seed in the 100, but also is the favourite to win 50 free gold with a 20.39; the only sub-21 entry at the meet. This year, Colin Savage of Hunting Valley University School is going in second at a 21.05 and Vandalia Butler’s Matt Brunsky is third with a 21.17. This means that the top three entry times in the 50 free this year are actually quicker than last year’s winning time of 21.23, performed by Joey Mullen.

A junior last year, Charlie Clark was 5 second off gold in the 500 free at the 2019 version of this meet and will come back with a shot at redemption with a top seed in the event. With a 4:27.98 entry time already 3 seconds quicker than his silver medal performance last year, the Sandusky Perkins senior will have a good shot at gold. Sam Campbell of Dayton Oakwood trails with a 4:35.66 for the second seed and Cincinnati Indian Hill senior, Will Taylor sits at third with a 4:39.87.

With individual and team titles on the line, all teams are now gearing up for what should be an exciting conclusion to the 2020 Ohio State swim season.

Any update on meet results coming?

Carson Foster didn’t graduate last year. He is a senior this year. Assume he is bypassing high school competition to focus on the Olympic Trials.

Your assumption is wrong. He graduated early. https://swimswam.com/carson-foster-graduating-high-school-early-to-focus-on-olympic-trials/

I know you can’t mention everyone but Aaron Sequiera is entered with a 19.9 50 fr /47 100 back. He’s been 46 in the event. If Carson foster was still here, we’d have two going 46 mid or better. How many high school meets will have two guys going 19 (potentially 3)? Chaney will be all over the nag. It should be a fun meet.