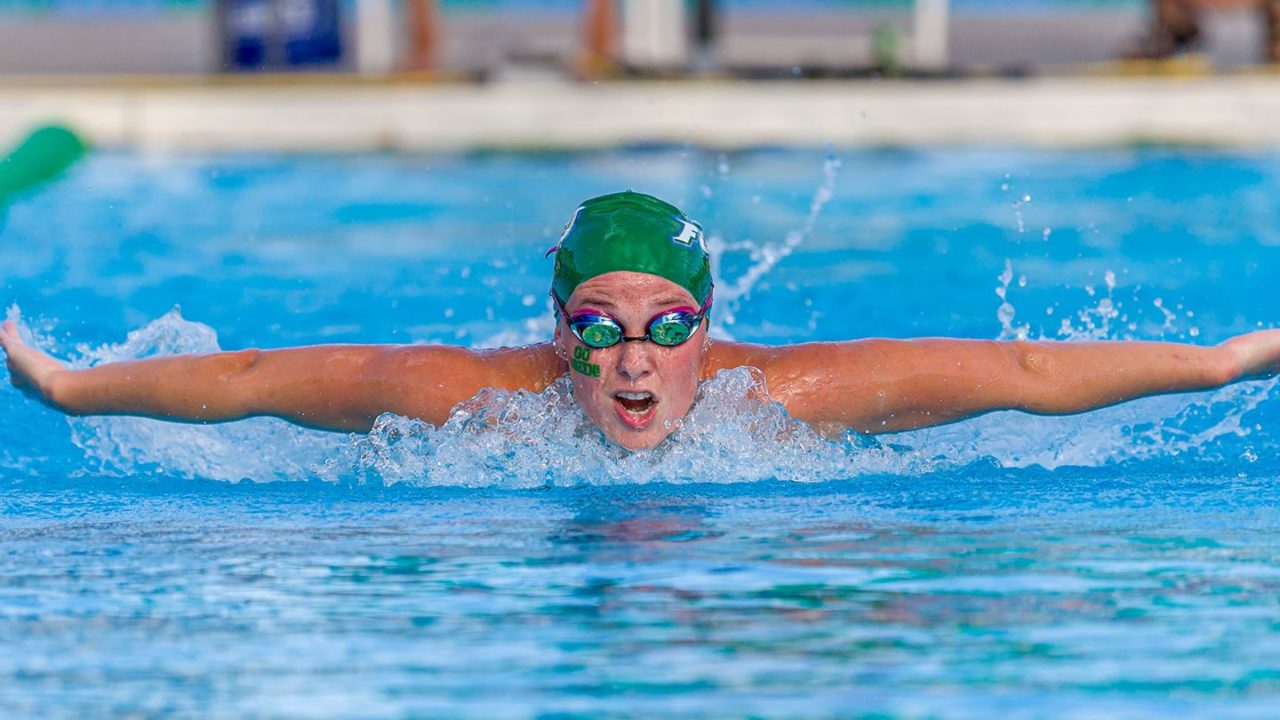 While the Liberty women are the defending champions after earning their 2nd title in program history, FGCU is the favorite this year to return to the top. Archive photo via Linwood Ferguson

MEN’S 100 BREAST: Gardner-Webb’s Jordan Mintz was the champion last season, but runner-up Oleksandr Karpenko (Incarnate Word) has already been a second faster than what it took to win in 2019. Old Dominion’s Peter Durisin has been just hundredths away from that winning time this season.

WOMEN’S 100 FLY: The top 3 swimmers in the CCSA this season are separated by just 6 hundredths. With all 3 medalists from last year graduating in 2019, FGCU’s Wiktoria Czarnecka is the top returner. She leads the conference, but teammate Cassidy Fry and Campbell’s Maddie Baiotto are narrowly behind. All 3 are returning finalists, as is Liberty’s Lindsey Cohee.

MEN’S 50 FREE: We could see a close race between Gardner-Webb’s Brady Fields and Old Dominion’s Parker Harp, who are separated by just a tenth this season. They lead the CCSA this season, but runner-up Zach Dingfield of Gardner-Webb is the top returner after taking silver in 2019. Fellow returning finalists Noah Wilkins (Old Dominion), Christopher Lestage (Incarnate Word), Kegan Ford (Howard), and Connor Smoak (FAU) are also in the hunt.

WOMEN’S 400 IM: CCSA Record holder Liz Zeiger of FGCU is back on top this season. She set the record to win it back in 2018, but then took 3rd in 2019. She leads the CCSA in a time that’s seconds faster than she swam at last season’s conference meet. The reigning champion has transferred out of the conference, but 2019 runner-up Mikayla Herich of Liberty could give her a challenge for the win.

MEN’S 100 FLY: Gardner-Webb’s reigning champion Tim Bennett and Old Dominion’s 2019 runner- up Filip Svedberg return to battle for the title, but FAU’s Ahmed Hussein leads the CCSA in well under what it took to win the title last season. Incarnate Word’s Bryce Kuchan, the 2019 bronze medalist, and Jared Wallace are also medal contenders.

While the Liberty women are the defending champions after earning their 2nd title in program history in 2019, FGCU is the favorite this year to return to the top. Liberty returns a ton of diving points, but FGCU is projected to largely outscore them in swimming. Diving should go a long way in helping Liberty stay ahead of Campbell. Incarnate Word and Campbell should have a close battle for 3rd, with UIW’s divers giving them an edge.

Incarnate Word is the favorite to repeat as champions. Both UIW and FAU have strength in diving, which should help FAU stay ahead of Gardner-Webb. NJIT returns some diving points, while Old Dominion’s 2019 scorers have both graduated, but Old Dominion’s projected advantage may be too much to overcome.