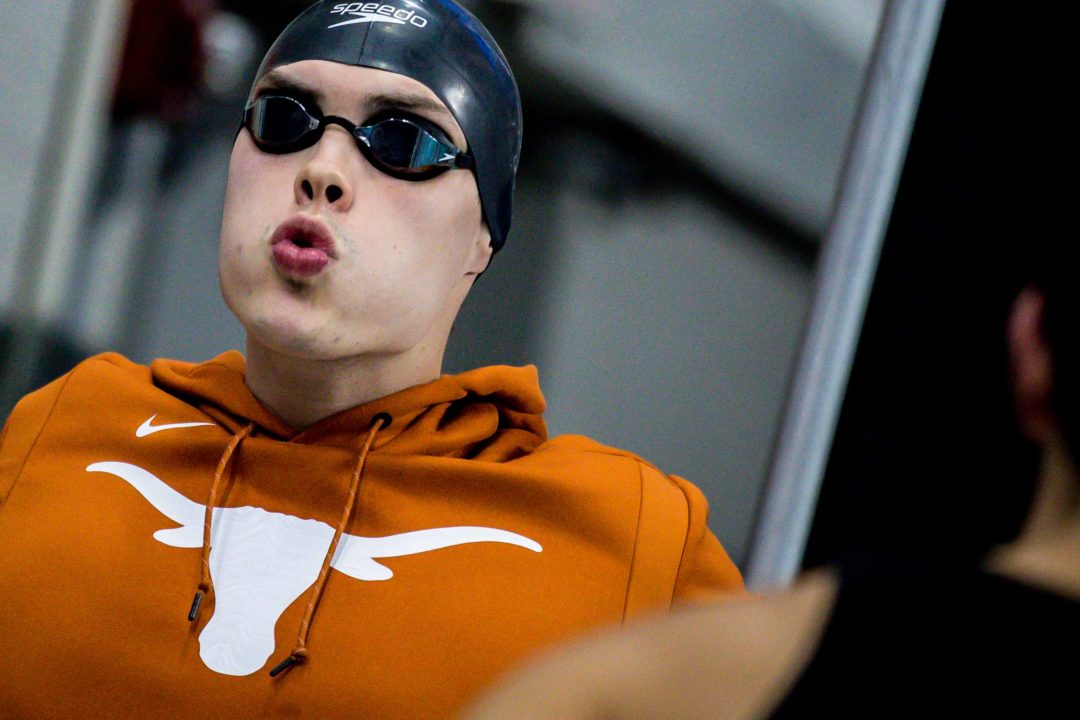 Texas' top-end strength and depth, combined with its 40-year win streak, all but guarantees a 41st Longhorn victory at the Big 12 Championships. Current photo via Jack Spitser/Spitser Photography

After 3 days of conference action, we’ve seen some very solid swims. But nothing breath taking, no swim with that X factor to really pile the pancakes on.

The Texas Longhorns haven’t lost the Big 12 Championships in 40 years and 2020 looks to be no different. Though Texas was knocked off the top of the podium at NCAAs by California in 2019, the team is as strong as ever and will benefit from new additions such as Maxime Rooney and Jake Foster.

Though top freestylers Townley Haas and Jack Conger are no longer with the program, Drew Kibler had a breakthrough summer in 2019 and has carried that momentum into the NCAA season.

While Texas placed 2nd at NCAAs in 2019 and won the National Championship the four years prior, neither West Virginia nor Texas Christian placed at the 2019 championships. Texas’ top-end strength and depth, combined with its 40-year win streak, all but guarantees a 41st Longhorn victory at the Big 12 Championships.

Texas Christian University will put its large freshman class to the test against some of the best swimmers in the nation and vie with West Virginia for the second-place finish.

There is really no debate as to whether Texas will win its 41st Big 12 Championship. Maxime Rooney, Austin Katz, Sam Pomajevich, and Drew Kibler are all in the conversation for individual NCAA titles. Furthermore, Texas is the odds-on favorite to win the NCAA team title this year, wresting the championship away from Cal, who prevented Texas from hitting a 5-year win streak in 2019.

West Virginia lost several key-players in 2019, though the Mountaineers remain the solid choice for the runner-up in the team standings in 2020. David Dixon is the defending champion in the 100 and 200 fly and stands a chance at making noise in the 200 IM. WVU lost its top breaststroker last year, though sophomore Fausto Huerta has the potential to make the ‘A’ final and potentially medal.

Though the Horned Frogs graduated some of their fastest swimmers in 2019, a freshman class of 10 makes for a promising cohort to take on the Big 12 over the coming three years. While Texas Christian was thoroughly out-done by its two competitors in 2019, the winds could be changing for the Horned Frogs–especially if their recruiting game remains strong.

100 and 200 Backstroke: Texas senior Ryan Harty and junior Austin Katz are not only Big 12 title contenders in the 200 backstroke, but also in the conversation for the NCAA title, with the edge going to 2018 National Champion and 2019 NCAA runner-up Katz. Harty has been slightly faster than Katz this season in the 100, with Alvin Jiang also having been 45.2 in December. Jiang is also a contender for a top finish in the 100 fly, which gives Texas options–taking on the 100 fly/100 back double might not be ideal and Jiang might be better utilized in the 50 free/100 fly/200 fly in order to space out his events.

500 Freestyle: Drew Kibler is once again a stout contender for the 500 freestyle title at Big 12s, though 200 fly specialist Sam Pomajevich posted a 4:12 in NCAA prelims in 2018. Though Pomajevich has not improved his PR in the 500 since 2018, he experienced a fantastic time drop in the 200 fly at the Minnesota Invite in December. If Pomajevich experiences a similar improvement in freestyle he could upset Kibler for the title in Morgantown. Texas sophomore Alex Zettle and junior backstroke specialist Austin Katz could also make for an interesting race and potentially take the 2020 Big 12 title in this event.

100 Butterfly: A freestyle specialist until the 2019 SEC Championships when he took up the 100 and 200 fly, Texas senior Maxime Rooney is a favorite for not only the Big 12 title in the 100 fly but also a confident pick for the NCAA title in March. Alvin Jiang, another transfer, is one of only two men in the Big 12 (alongside Rooney) to have been sub-46 in the 100 fly this season with a 44.93. West Virginia’s David Dixon won this event in 2019 though the 46.73 Dixon posted last year is unlikely to get it done this year. Dixon has had success in the 100 LCM butterfly that Jiang has not, and if he’s able to translate his 51.4 from 2018 into a 45-mid or 44-high performance in yards then he will be in serious title contention.

The Longhorns’ reign in the Big 12 is unlikely to come to an end anytime soon. While Texas is always a fun team to watch in competition, the more interesting team battle will be for 2nd and 3rd between West Virginia and Texas Christian University. Though TCU has a strong freshman class, they will have a tough battle to secure the title of Big 12 runner-up with the Mountaineers.

Based on current conference rankings, West Virginia boasts more likely individual scorers in the 50 and 100 freestyles with deep rosters in the butterfly, backstroke, and Individual Medley races. The freestyles especially indicate an edge over TCU in every relay, save the 800 freestyle. This has also been shown in current season-bests for each team.

In regards to diving, Texas is favorited to bring home the lion’s share of points on the boards, though West Virginia has more divers than TCU which will benefit them in picking up the leftover points.

Info has been added above.

Fun, and a wee bit of pressure, since they still don’t have a cut time, right?

0
-1
Reply
GAME OVER
Reply to  Austinpoolboy

After what was through down at Class relays, don’t worry about their 200 free relay. 😉

As one prior Longhorn swimming alum who swam at the tail end of SMU’s Multi-decade Southwest Conference championship run late into the ’70s, I truly know how other BIG12 conference teams might feel about the Big12 Champs. What better way to eventually grow your program to attract top swimmers – to compete against top swimmers in preparation for NCAA’s and beyond? Is it possible for other BIG12 schools to emerge and eventually challenge UT? I think yes!

Back then, I recall UT was the first team to defeat SMU in any SWC dual or championship meet in 25 years in our 1974 “DUAL IN THE GREGORY GYM POOL”! That memory reminds me of how I felt that day and the… Read more »

Should be a close one this year

Rough when Dan Krueger doesn’t get a mention for Texas

How many Sanitation Engineers?

Just curious…who takes the time and effort to vote down student athletes who excel in the classroom in rigorous STEM fields? Pathetic.

Is Rooney trying to transfer back to Florida after he saw those freestyle times?

Doubt it. Especially considering how well he swam with UT last summer.