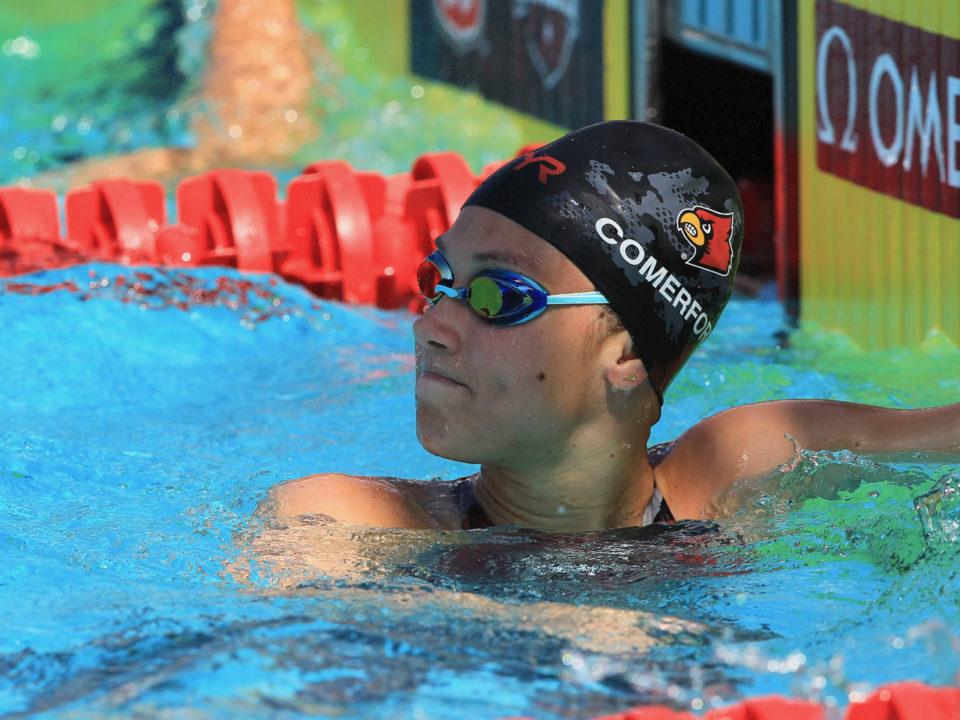 NC State has surged to a 45-point lead in the ACC, but with two days of racing left, it's still anybody's game between the Wolfpack, Louisville and Virginia. Archive photo via Tim Binning/TheSwimPictures.com

NC State has surged to a 45-point lead in the ACC, but with two days of racing left, it’s still anybody’s game between the Wolfpack, Louisville and Virginia.

Friday is the meet’s busiest prelims session, with heats of five swimming events. Louisville returns the defending ACC champs in the 100 fly (Grace Oglesby) and 200 free (Mallory Comerford), and both are the top incoming seeds.

But NC State has the top seed in three other races. Elise Haan is the defending champ and top seed in the 100 back. Rookie Sophie Hansson has already been 58.44, faster than graduated 2018 ACC champ Natalie Pierce of FSU and top returning swimmer Caroline Hauder (59.81 last year at ACCs, 1:01.28 this season). Meanwhile fellow NC State freshman Emma Muzzy is the top incoming 400 IM seed at 4:05.60, though the defending champ is Reka Gyorgy of Virginia Tech, who went 4:04.42 last year.

Keep refreshing this page for live, event-by-event updates from Greensboro.

Last night’s 50 free winner Morgan Hill has put herself in the driver’s seat for a 100 fly win, going 51.35 this morning for the top qualifying spot. That’s a lifetime-best by seven tenths for Hill, who hadn’t been under 52 before this morning. She swam the 200 free last year, taking 10th, but will get a better finish with the 100 fly this year as she’s locked into the top 8.

NC State’s Kylee Alons, third to Hill in the 50 free last night, is the second qualifier at 51.69. The Wolfpack freshman cut almost a full second off her lifetime-best.

Last year’s ACC champ Grace Oglesby is third in 51.72. She went 51.11 last year and has already been 50.75 this season, so she’s still the title favorite at this point.

Duke put a pair of swimmers into the A final in their best event so far. Alyssa Marsh was 51.87 and Kylie Jordan 52.16. Marsh’s time was a drop of a few tenths from seed, while Jordan was 51.4 just a few weeks ago. Virginia Tech’s Joelle Vereb is sixth, followed by Virginia’s Anna Pang and Notre Dame’s Nicole Smith.

Virginia sits third as a team after last night, with some serious ground to make up if they are to defend their 2018 team title. But the 100 fly was a good start, with 2 A finalists and 2 B finalists. Current point leaders NC State have 1 A and 1 C, while Louisville has 1 A and 2 Bs.

Poole was the 200 IM champ, and cut a good second between prelims and finals. The IMs have become standout events for the Wolfpack, as NC State also put four into the A final of the 200 IM yesterday.

Louisville got Sophie Cattermole into the A final in sixth, while Notre Dame freshman Luciana Thomas is seventh. Pitt gets their first A finalist of the meet so far in swimming, with junior Sarah Giamber taking 8th.

NC State adds to its 4 A finalists with 2 Bs and 3 Cs, meaning they should extend their lead dramatically in this event tonight. Louisville has 1 swimmer in each of the three finals, while Virginia has just 1 B and 1 C.

Madden won the B final last year, dropping more than a second from prelims to finals. Moroney was second overall, going 1:43.60 last season, while Eddy was third and Valls fifth.

The defending champ is Mallory Comerford of Louisville, who went 1:44.38 this morning and sits fourth. That’s not far off what she went in prelims last year (1:43.76) before blasting a 1:42.17 to win the event. But Comerford hasn’t been fully primed for ACCs since 2017, when she went 1:41.7 and set the meet record.

Notre Dame’s Abbie Dolan has had an outstanding year, and the sophomore sits second right now in 1:44.19. Dolan was 1:44.90 for seventh last season and looks ready to move up from there.

Louisville also put Arina Openysheva into the A final, and Georgia Tech gets their first championship finalist of the meet so far with Haibing Wang in 8th.

UVA dominates this event with 4 in the A heat. Louisville has 2 As and a B, while NC State has just a single scorer: Tamila Holub in the C final.

It was a freshman-dominated affair in the 100 breast this morning, with rookies taking the top four spots and five of the top eight places in the A final. NC State’s Sophie Hansson blasted a 57.95 to the lead the field. That’s believed to be the second-fastest time in history for a freshman, behind only a 56.85 from American record-holder Lilly King.

Florida State’s freshman duo of Ida Hulkko and Nina Kucheran both made the A heat. Hulkko is second at 59.35 (three tenths off her season-best) and Kucheran was 1:00.10 for 8th. Virginia freshman Alexis Wenger went 59.70 for third, and Louisville freshman Kaylee Wheeler had a big swim, getting under a minute for the first time and going 59.75 for fourth. Her Cardinal teammates Mariia Astashkina (59.85, 6th) and Morgan Friesen (59.98, 7th) also made the A final.

The Wolfpack put 2 in the A and 2 in the B heat for tonight. Louisville leads the way with 3 As and 2 Cs. Virginia has solid scoring depth, though, with 1 A, 1 B and 3 Cs.

It was another strong event for UVA, with 3 A finalists in the 100 back. The Cavs are led by Megan Moroney, who went 51.83, faster than she was in taking third last season. Sophomore Marcella Maguire is third (52.08) and knocking on the door of her first sub-52 swim, and fellow sophomore Caroline Gmelich (52.45) is fifth.

NC State answered with two A finalists of their own, though. Defending champ Elise Haan was 51.97. She cut about seven tenths between prelims and finals last year, but was 51.4 in prelims. Meanwhile freshman Emma Muzzy completed a tough 400 IM/100 back double, doing exactly what she had to with an 8th-place finish. She’ll be locked into the top 8 tonight, so even as her rest between the 400 IM final and 100 back final shrinks in the finals setting, she’ll have nowhere to go but up in the latter race.

Duke’s Alyssa Marsh completed her own double, making the 100 back A final after hitting the 100 fly top 8 earlier on. Her teammate Maddie Hess is also into the championship heat in 7th. The other A finalist is Notre Dame’s Carly Quast, who went 52.49. She was 8th here last year.

This was a huge event for Virginia, with 7 scorers lined up for tonight: 3 in the A, 3 in the B and 1 in the C. NC State has just their two A finalists, while Louisville will really struggle with just one B finalist in this race.

We’ll have a more full look at the A, B and C finalists for each team (along with a scoring projection) coming later this morning.

Wasted some swims there. I would say UVA going 4 in the A final and nothing else in the 200 Free was more impressive. Right now Virginia has 6 A swims to NCSU’s 5.

Yeah but they’re only able to sprint 😉

UVA just not deep enough…really need to get some IMers and distance freestylers. I know they load up next year (Desorbo didn’t get a fair deal in his first year recruiting)- next year will be an amazing meet.

Have to say, ACC pretty underwhelming. Some good top end swims but outside of the big 3 teams the rest is pretty unimpressive- I will say ND is doing well, they continue to get better and better. The wrong coach left UNC

It’s prelims, dang. Wait until you see the times tonight. I would say Marsh’s 50 Fly split was impressive, and she will go faster tonight, plus Ryorka will get back to her 4:04 ways tonight I would bet.

*Gyorgy, not Ryorka… man I was waaaay off.