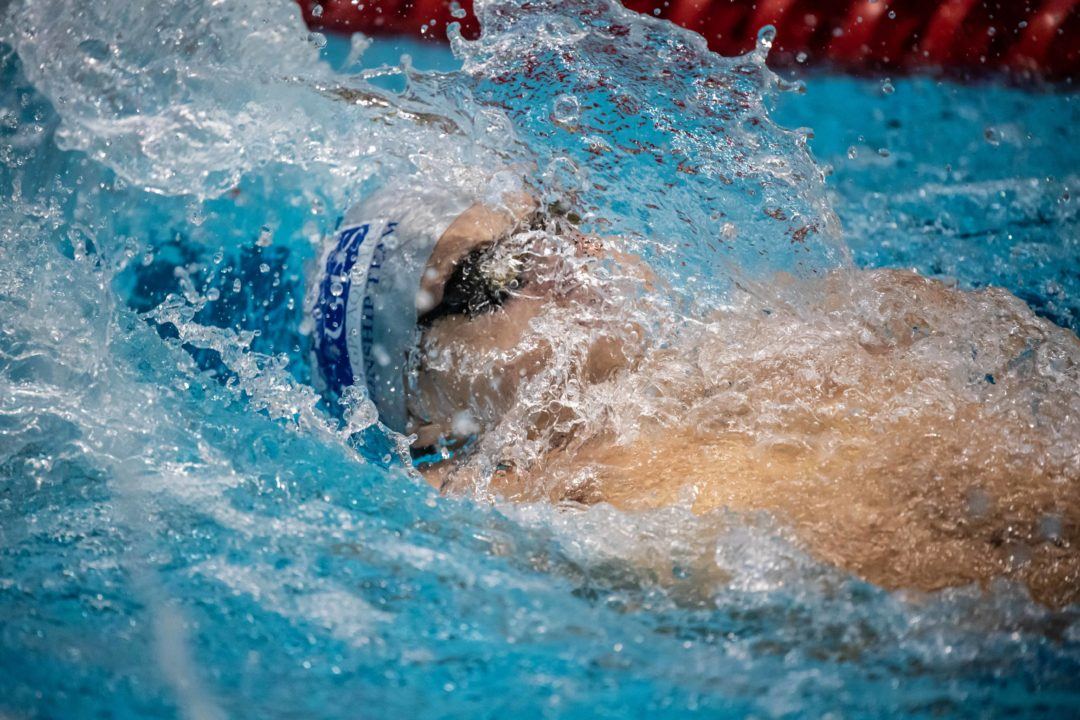 Highlighting the evening was Tess Howley of Long Island Aquatics, who broke the 13-14 NAG in the 200 fly. Also making age group history was Anthony Grimm of the Mason Makos, tying himself as the 2nd-fastest 100 breast ever in the boys 15-16 age group.

In a backstroke showdown, Isabelle Stadden emerged victorious over Phoebe Bacon in the 200 back. Currently, the duo hold the #2 and #4 fastest 200 back times in the 15-16 age group in the event, respectively.

It was Isabelle Stadden and Phoebe Bacon swimming stroke-for-stroke throughout the entire 200 yard race. Into the last stroke, Stadden had the three-tenths advantage over Bacon. Stadden was still just a tenth off her personal best, which maintains her #2 time on the 15-16 rankings. For Bacon, her second drop from prelims puts her at #4 all-time right behind Kylie Stewart, Stadden, and Regan Smith.

ASU-commit Jack Dolan head the lead for the majority of the race, until James Marcum blasted out a blistering 25.22 closing 50 against Dolan to win the title by 0.11. IU-commit Marcum had a 4-second improvement over the day places him at #58 all-time in the 17-18 age group while Dolan is now #61.

From lane one, Torri Huske showed outside smoke and maintained her top seed coming into the meet. Huske dropped from her personal best with a 48.70, which is now #18 in the 15-16 age group.

In a tight race effort, Jacob Rosner challenged Luke Maurer in the closing 25. However, Maurer defended his top spot from prelims to win the event. Taking third place behind the duo was Stanford-commit Andrew Matejka.

Out of the B-final, 16-year-old Sam Oliver of Snow Swimming dropped 8 seconds from his prelims time to win the final with a 4:21.38. While his time would have placed 3rd overall, his time is now #26 all-time in the 15-16 age group.

Anna Keating pulled away from Hannah Bach in the last 25 and pushed to become the only swimmer under a minute in the event. Keating’s 1.4-second drop from prelims earned her a personal best of 59.04, which ties her for the 4th-fastest 100 breast in the 15-16 age group.

Anthony Grimm showed his true power in the race, maintaining a body length-lead nearly the entire race. At the touch, the 16-year-old Grimm finished in a second drop of 52.51, tying him as the 2nd-fastest 15-16 swimmer with Forrest Frazier.

Holding a consistent form throughout the race was Alex Colson, who dropped just a tenth off his prelims time to maintain his spot on the all-time top 100 times in the 17-18 age group. Florida-commit Timothy Marski dropped under the 1:46 mark to take second behind Colson. In third place was Jack Mowrey, who dropped 2 seconds from prelims.

Addison Smith put Baylor in the lead with her 24.06 FL split, yet Katelyn Mack of NCAP pulled out a 22.49 split to have her squad out-touch Baylor by 0.19 seconds. Aquajets took third with a 1:40.67, yet anchor Abigail Kapeller swam the fastest FR split with a 22.08.

Where are the 200 back videos? not to be found on usa swimming

USA Swimming just uploaded the 200 back and girls 100/boys 500 free race videos on youtube. We just added the videos.