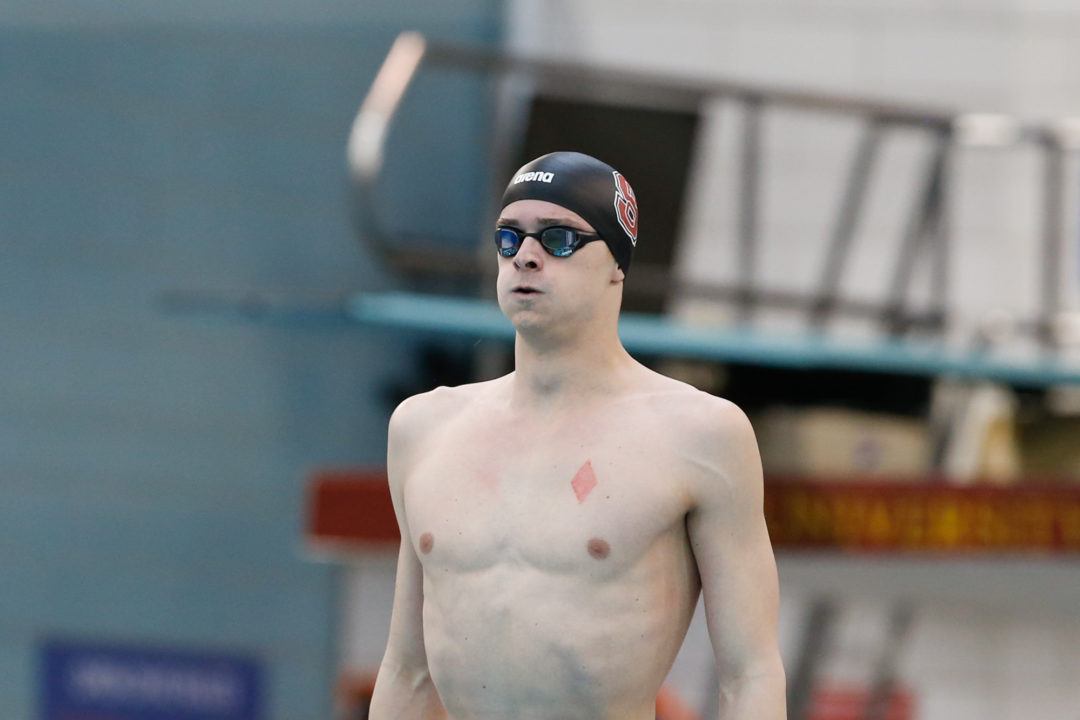 Tonight's explosive relay session yielded some big results. But it also gives us a hint at what we can expect for other relay lineups moving forward. Archive photo via Tim Binning/TheSwimPictures.com

Tonight’s explosive relay session yielded some big results. But it also gives us a hint at what we can expect for other relay lineups moving forward.

As each athlete can only swim 7 events, those swimming the maximum of three individual races are capped at 4 relays. Like we did with the women’s meet, here’s quick look at who swam tonight and who didn’t, and what it means for each team’s relay lineups moving forward:

Tennessee scratched this relay entirely. On the surface, that’s a questionable call, considering they were the 18th seed and didn’t need to pass many teams to score. But in hindsight, they would’ve had to improve their seed by 1.6 seconds to score. At SECs, they used the sprinter Decoursey on this relay, but only got a 1:36 split. Now, he’s free to swim the 400 medley relay he didn’t swim at SECs. He speeds up that relay by at least a second over the 42.1 they got on the anchor leg at conference. Decoursey was 41.3 on a free relay split at SECs.

Did Swim Tonight, must skip 1 remaining relay or swim 2 individuals

Stewart is the big choice. NC State’s top flyer and backstroker, he’s invaluable to their medley relays. He was also 18.8 on the 200 free relay and led off in 42.6 on their 400 free relay at conference. And last year, he split 41.6 on the winning 400 free relay at NCAAs.

It feels like NC State should probably leave him off the 200 free relay. But last year, they made the A final of the 200 medley relay only to essentially punt that relay lineup, so it’s still up in the air what the Wolfpack will do with one of its top dogs.

Seliskar was almost certainly going to swim this relay. Cal can probably do without him on one of the shorter relays that don’t play to his strengths as much. Look for Seliskar to perhaps not swim the 200 medley relay.

Louisville used their flyers to go after the free relay tonight, to the tune of a 6th-place finish. They’re also sneaky-good at the 400 free relay and will probably stack that. Last year, Albiero only swam two individuals and competed on all five relays. But with all three of his individuals seeded to score, that’d be a gutsy call to repeat the trend. It’ll probably be the 200 free relay that goes without Albiero and Harting.

Texas A&M took 13th with the freshman Casas going 1:33.7 on the leadoff. He’s set to be a busy swimmer this week – his best options are probably to sit out the 400 free relay (A&M’s lowest seed) or scratch one of his individual races – he’s seeded well out of scoring range in the butterflys, though both are presumably unrested seed times, considering he swam other events at SECs.

They are destined to 4th. Didn’t really matter. It was about winning that race and setting a record. That’s the real tail.