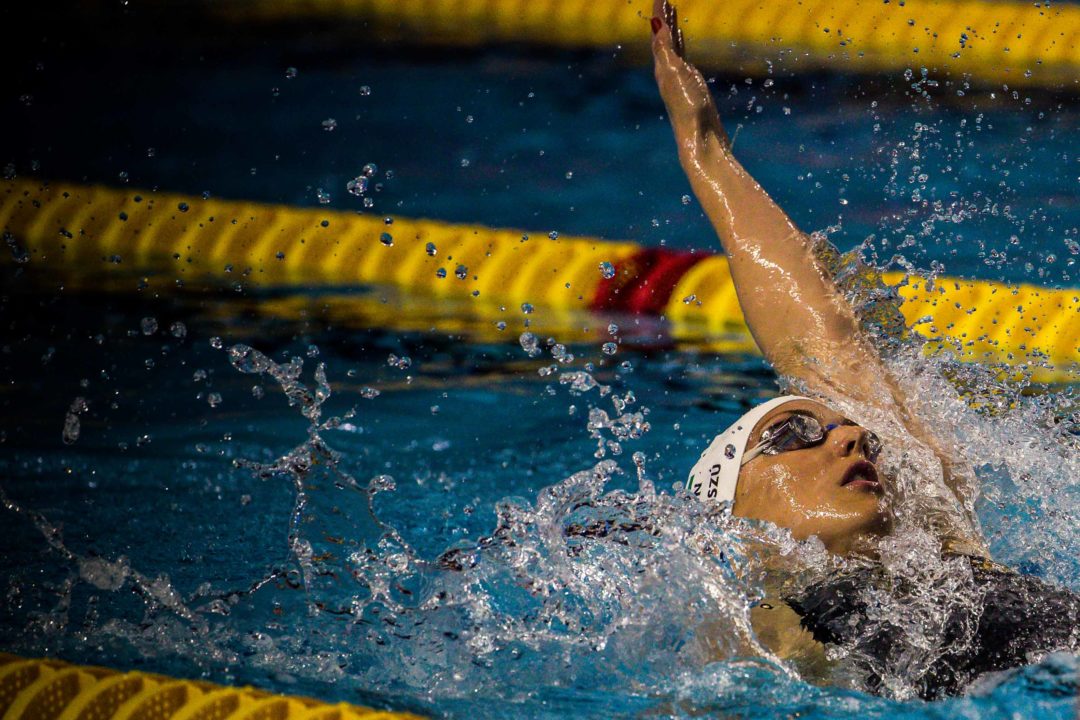 Katinka Hosszu is opting out of backstroke events at this year's European Short Course Championships. See what other surprises are in store on the entries. Archive photo via Jack Spitser/Spitser Photography

The 2019 LEN European Short Course Championships are almost upon us, with the 5-day meet kicking off on Wednesday, December 4th. Some of the world’s fastest short course swimmers are set to descend upon the storied Tollcross International Swimming Centre in Glasgow, with 3-time Olympian Hannah Miley designated as the event’s ambassador.

Last time around in Copenhagen, the nation of Russia came away with the top medal count, reaping 18 medals in all, including 9 golds. Hungary was next in line, with 13 medals, including 8 golds, while Italy rounded out the top 3 nations in the overall swimming medal table with 17 medals in all.

We’ve reported how Swedish big guns Sarah Sjostrom and Michelle Coleman have opted out of the competition, as has Great Britain’s World Record holder Adam Peaty.

However, Hungary’s Iron Lady Katinka Hosszu will be competing in full force, following up her 2017 haul of 6 individual gold medals with 5 entries this time around. Hosszu is entered in all 3 IM events, as well as the 100m and 200m fly, but is interestingly absent from the backstroke races.

In Copenhagen, Hosszu swept the 50m, 100m and 200m backstroke events, so her missing name relinquishes the opportunity for back-to-back-to-back golds. Hosszu not only swept the 3 races in 2017, but also in 2015 in Netanya, Israel. Of note, Hosszu stated after this summer’s World Championships that her backstroke events were the ones in which she was most disappointed in her performances.

Instead, on-fire Dutch swimmer Kira Toussaint looks primed to make a charge at the 50m/100m backstrokes, with Italy’s Margherita Panziera and Russia’s Daria K. Ustinova ready to rumble in the 200m back.

On the men’s side, first off it’s eye-catching to see Scottish swimmer Duncan Scott entered in the men’s 400m IM. The 22-year-old dynamic Olympian is still set to swim his bread-and-butter 200m free, as well as the 100m free, 100m IM and 200m IM, but the longer IM is unique to this program and appears to be an alternative to his swimming the 200m fly.

From a British perspective a couple of things interest me.
1. Anderson is entered for the 400 free.
2. O Connor is entered for the 100 fly(an event she hasn’t done at a major championships in quite a while)
3. Duncan Scott is doing freestyle/IM events over the 200 fly even though I would say the 200 fly has been one of his strongest events this season.
Anyways, considering the form of other athletes this season Duncan Scott could definitely win the 400 IM.

I think O’Connors weakness over the past couple of years, especially since the olympics, is that she seems to struggle when having packed programs. Heats and finals in multiple events seem to kill her out of any medal chances in her best events (E.G Euros 2018). I think a packed programme here with 4 individuals + more Relays and the ISL is EXACTLY what she needs to get back to her best, which is one of the best in the world. Using meets like this that are not overly important for brits is the perfect time for her to do loads of events, build that racing endurance and put her in the best stead for the Euros and Olympics next… Read more »

I had a feeling we’d see Siobhan swimming the fly again after her move to Luff. The womens medley is missing a fly leg and she is a very good ‘flyer when in shape – NC would want her filling that spot, wouldn’t they? Not at all surprised to see Scott in the 400IM. He all but confirmed 200IM was on the radar for Tokyo in the summer, and he doesn’t swim fly globally. Anderson in the 400 is slightly odd, but again, she is pretty good at the event – She was one of the fastest juniors in Europe a few years ago (4.14 in 2016) – And she raced it a lot last winter to build up her… Read more »

I think what is amazing about it is the fact that he wasn’t even competing in the 100 free at worlds and was focusing on 200 free/IM.

Makes sense for Hosszu to drop backstroke. It is so competitive now. She has been nowhere near the pace she’d need to be to challenge in Tokyo whereas she is still number one in IMs and the 200 Fly is a bit more open than the backstrokes so she may feel she has a chance of a medal.

I dont think she will give up back whatsoever, she doesnt have this mentality… for me she is just trying to improve that on her training in order to compete again (focusing on tokyo)

This sets Katinka up to focus solely on the IMs next summer, back is way too packed nowadays and the 200 fly could easily be a 6th place which would add 600 meters of work for nothing. She hasn’t lost an IM race at a major championship since 2012, hope she goes all in on that to pick up the double back to back Olympic golds, officially becoming the greatest all-rounded female swimmer of all time(if the 2013-2019 run hasn’t been enough for you). Hope in a decade or so she can take over FINA and empty house

200 fly could easily be gold. Unfortunately, the Olympic schedule excludes that option.

If it could be easily she would be jumping immediately into it. When it is hard she withdraws immediately. What would you expect from the swimmer who shows exceptional form at the first day of competition showing unimaginable 4:26. Everything, but not dropping 200 fly.

She has a much better shot at both the IMs (obviously). And she is capable of winning the 200 fly but the problem there is that there are a lot of other women who have a shot at winning. Also, there is some good depth in Hungarian 200 fly with Szilagyi, Jakabos and Kapas so she may not even qualify.

I am not saying that she doesn’t have a chance. BTW her historically best rank in individual stroke is exactly in 200 fly – #5 all time. But it is getting hard now. Then forget it. Iron Lady image is more important to save than some uncertain attempt against competitive field.

She could do a 2:05 mid or low. If Belmonte is not in shape, then there she goes. The problem is that the semi is half an hour ahead of the 200IM final.

It’s still Black Freud Day. Grab your 50% off for your medication kid.

Yeah, she’s constantly dropping those easy 400 IMs. The 400 IM is so easy that Phelps (the current WR holder) dropped it when he was 3 years younger than Hosszu is now. And we all know what a wuss he was. Another strong argument, as usual.

You must have very thick skin to continue to express opinions that constantly draw the disapproval of everyone on the forum.

@STEVE: if you think that this forum consist of a few dozens readers then you are very mistaken. Most of those who are visiting this website don’t care what I or you are posting. But, yes, as a good observer you noticed that there is indeed some group of people who are ready to object even when I haven’t said yet anything. If you are going to discuss reasonably the achievements, plans, chances of some thirty years old swimmer then I am with you. If you are demanding me to get excited about this money driven “iron” and this “lady” bs then, I’m sorry, you will hear from me facts only that are telling completely different story. In order to… Read more »

Do the other FINA sports get to vote for this pre ordained aquatic leader ?

Did you forget that Yana Klochkova has already doubled up in the IMs at the Olympics?