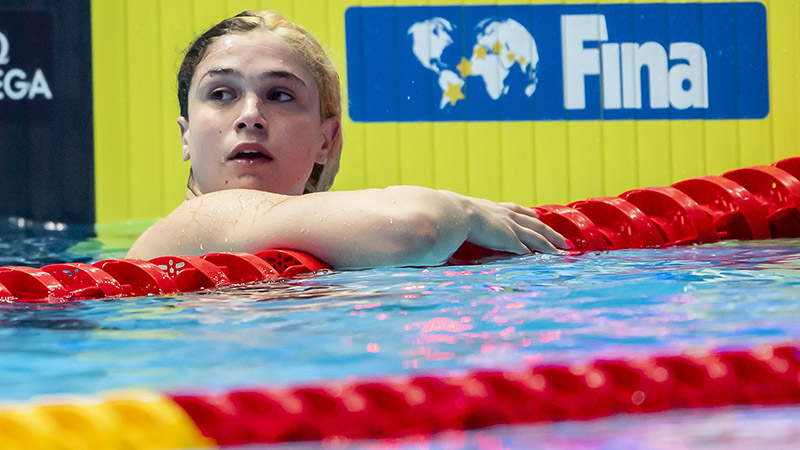 A pair of teenagers in Benedetta Pilato of Italy and Evgeniia Chikunova of Russia come in as two of the big favorites in the women's breaststroke events. Archive photo via Giorgio Scala / Deepbluemedia / Insidefoto

The women’s breaststroke field at the upcoming Short Course European Championships is dominated by Italians and Russians, and leading the way for each nation are two rising stars who aren’t yet old enough to drive a car.

Coming in as the favorite in the women’s 50 breast is 14-year-old stud Benedetta Pilato, who surprised everyone when she won silver in this event at the Long Course World Championships in July. The Italian has shown she can perform in the short course pool as well, popping off a 29.41 in early November for the fastest time amongst anyone in the field this season.

Joining her seeded under 30 seconds are her countrymates Martina Carraro and Arianna Castiglioni, and Finland’s Jenna Laukkanen. Carraro has now been sub-30 four times, including when she won bronze at SC Worlds last December, while Castiglioni broke the barrier for the first time in late November at the International Swimming League’s European Derby. Only two Italians will be able to advance out of the prelims, so all three will have to be on their ‘A’ game in the heats to avoid getting locked out.

Laukkanen has been the most consistent of anyone in the field going under 30, doing so 11 times, including a silver at this meet two years ago. Her 29.93 at the ISL London meet is a positive sign for her medal hopes. Her teammate Ida Hulkko, who is taking a redshirt year off of competing with FSU in the NCAA, will also be a factor.

Carraro leads the 100 field having produced the two fastest times of her career in November, clocking 1:04.68 at the beginning of the month before a national record-setting 1:04.11 in London.

Also threats with entires under 1:05 are Poland’s Dominika Sztandera, and Russians Nika Godun and Mariia Temnikova. Medley specialist Siobhan-Marie O’Connor of Great Britain will also be in the mix after a 1:05.3 at the ISL London meet.

Similar to the Italian dominance in the 50, the Russians come into the 200 with the top-three seeds.

Leading the way is Evgeniia Chikunova, who only turned 15 a few weeks ago. Chikunova was the World and European Junior champion this summer in long course, and then dropped a world-leading 2:18.59 at the Russian SC Championships in November.

Temnikova was the runner-up to her in Kazan in 2:19.7, and was 2:18.8 last year. Daria Chikunova makes things more complicated, having been sub-2:20 in 2018, so the other two will have to be on their toes in the prelims to ensure they advance. The two who do make it through should be favored to both stand on the podium.

Italians Francesca Fangio and Carraro have both been in the 2:20s over the last month, putting them in the hunt. Lurking back with the 14th seed thanks to a long course entry time is Great Britain’s Molly Renshaw, who was only 2:23.8 at the Leicester Open in mid-November but has a best time down in the 2:17s from 2016.

Really excited to see how Chikunova and Van Der Merwe perform at their first senior international championships as well as Pilato. Would be nice to see some new people mixing it up in women’s breaststroke so we don’t just have King and Efimova winning all the time.

Is there a Psych Sheet yet for the US Open?