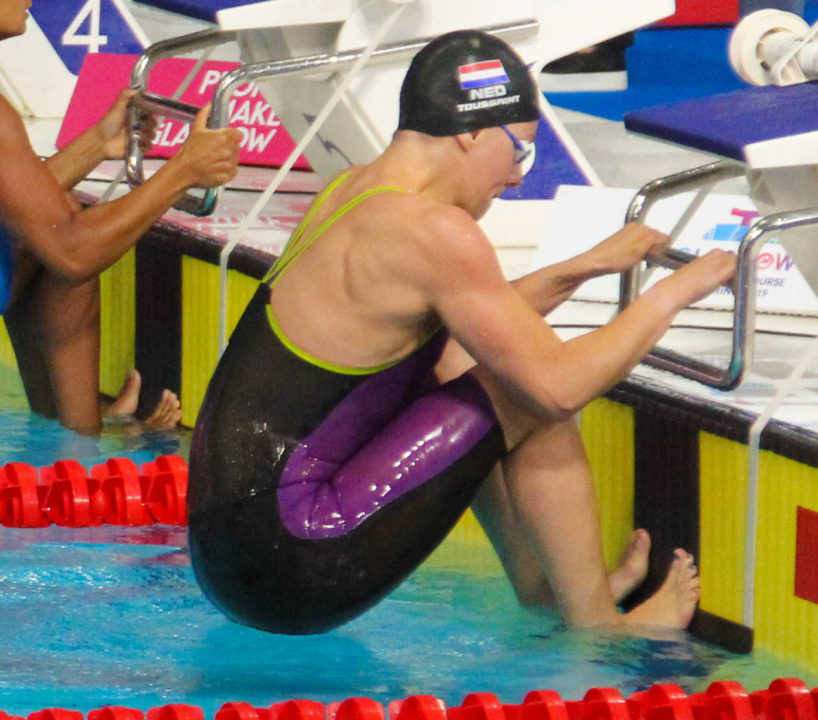 It won't be a path without obstacles, but Dutch woman Kira Toussaint could grab double gold in Glasgow in women's backstroke. Archive photo via Giusy Cisale

A glaring absence in the women’s backstroke events at the 2019 European Short Course Championships will be felt in Glasgow, as Hungary’s Iron Lady Katinka Hosszu will be opting out of the races next week.

As we reported, 30-year-old Hosszu swept the 50m, 100m, and 200m backstroke events at both the 2015 edition and 2017 edition of the Europan Short Course Championships, but this time around she has chosen to focus on the IM and fly events.

Without Hosszu, the heir apparent, at least in the 50m and 100m backstroke sprints, looks to be Dutch maestro Kira Toussaint. The 25-year-old Olympian has been on a tear as of late, busting out new national records in the long course pool while racing across the FINA World Cup circuit.

Toussaint entered the World Cup series with a LCM 50 back of 27.78 from Gwangju but brought that down all the way to a new Dutch standard of 27.49 before all was said and done. In the 100m event, Toussaint lowered her previous LCM best down from 59.75 to a monster 59.14 to set a new record for her nation in the process.

In the short course realm so far this season, Toussaint set a lifetime best of 55.58 in the 100m back while competing for Team Iron in London at the most recent International Swimming League (ISL) Derby. That outing checked in as a new Dutch national record and would have taken European Short Course Championships gold at the 2017 edition of the meet, beating the 55.66 with which Hosszu got the job done in Copenhagen.

However, the path to gold in the 50m and 100m back won’t exactly be free of obstacles for Toussaint, as she’ll be chased by the likes of Austria’s Caroline Pilhatsch, French standout Beryl Gastaldello, and Great Britain’s Georgia Davies.

Gastaldello has especially been on the fast track, earning runner-up MVP status while competing for LA Current in Maryland earlier this month.

Gastaldello fired off a new 50m fly French national record this ISL season, but also enters Glasgow as the 3rd seeded swimmer in the 50m back with a time of 26.13. She produced that backstroke PB last month in Lewisville, almost matching it with a follow-up 26.18 in College Park. Compare those marks to her 2018 season, which consisted of a 50m back PB of 26.64.

Austrian national record holder Pilhatsch owns the only other sub-26 second 50m backstroke seed time in 25.99, while Davies is tied with Gastaldello with an entry time of 26.13. Pilhatsch reaped silver in the 50m back at the 2018 Short Course World Championships in Hangzhou, her nation’s first-ever medal of that color at that quadrennial championships.

For Davies’ part, the Briton is the reigning Short Course World Championships 100m backstroke bronze medalist and she also took bronze in the same event at the 2016 edition in Windsor. She did not compete in Copenhagen.

Also in the sprint backstroke medal mix will be Czech swimmer Simona Kubova, who finished off the podium in 2017, but has a legitimate shot of taking a top 3 finish in both the 50m and 100m if she brings her A-game.

But Toussaint doesn’t extend at the same level over 200 meters (though she has shown a lot of improvement in that race this year). In that 200, Margherita Panziera of Italy carries the only sub-2:02 time into Glasgow with her 2:01.56. She took bronze in Copenhagen, so she’ll be gunning to upgrade that result.

UkrainianDaryna Zevina, captured silver behind Hosszu in Copenhagen and enters this year’s edition ranked 4th with a mark of 2:03.95, with Kubova about a second off of her in 2:04.97.