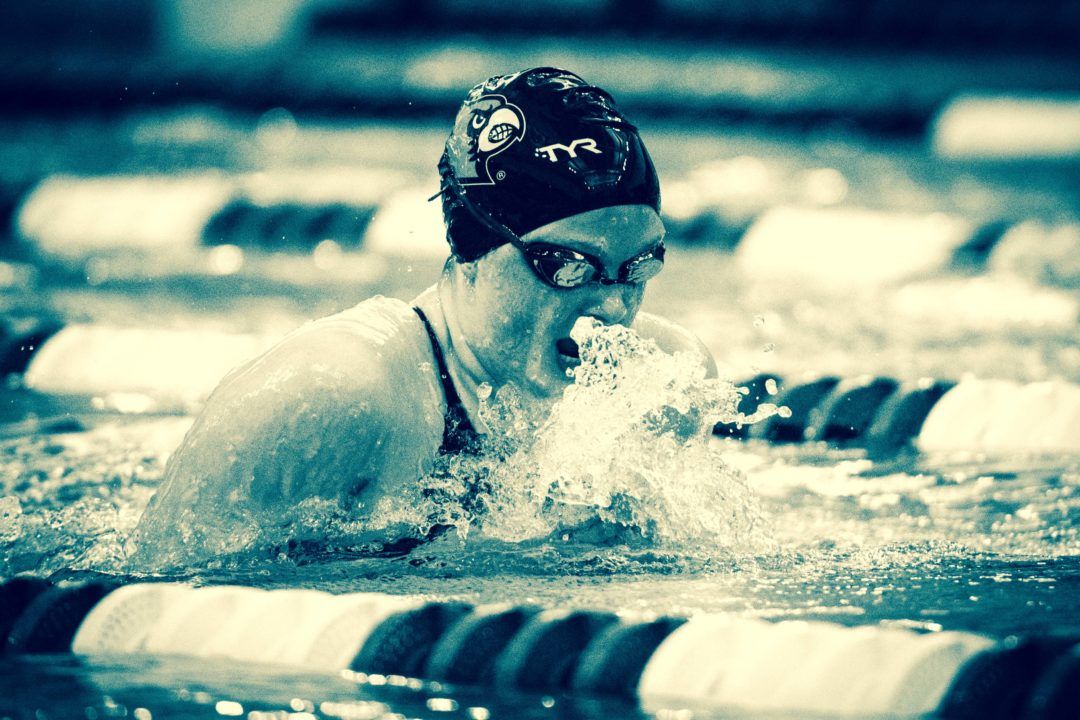 Louisville junior Grace Oglesby is one of three Cardinals aiming to defend their titles on the final day of the 2019 ACC Champs. Current photo via Mike Lewis/Ola Vista Photography

We’re down to the final day of the 2019 ACC Women’s Swimming & Diving Championships, and it promises to be an exciting day of action as NC State and Virginia duke it out for the team title, with the Wolfpack holding a 19-point leading coming into today.

Each of this morning’s four events will feature a returning defending champion, and in three of the four cases, there will be a NC State freshman ready to push them.

Mallory Comerford of Louisville is the top seed, and the clear favorite, in the 100 free. NC State junior Ky-lee Perry is the #2 seed, but with roughly a one second gap between those two, it should not be a close race.

The 200 breast features another Louisville swimmer, Mariia Astashkina returning to defend her title, but like Madden, she’ll have a strong challenger in the form of a NC State freshman, in this case, Sophie Hansson.

Yet another Cardinal, junior Grace Oglesby, will be aiming to defend her title. Like Comerford, she has a little more breathing room, with a time almost 2.5 seconds faster than #2 seed Kylee Alons, but the way the Wolfpack has been swimming this week, you can certainly expect Alons to give Oglesby a good race.

NC State’s Hannah Moore won the 1650 last year as a senior, and in her absence, last year’s 2nd and 3rd place swimmers, Tamila Holub of NC State and Sophie Cattermole of Louisville, as swell as Notre Dame’s Lindsay Stone, will be dueling it out in the middle lanes of the fastest heat of the 1650 tonight.

You think the UVA and NC State women are a bit motivated this morning? Both the Cavaliers and the Wolfpack got after it in the first event of the day, and seven of the eight lanes in tonight’s final be will filled by swimmers from one of those two schools.

Virginia put up the fastest three times of the morning, with Megan Moroney, Emma Seiberlich, and Paige Madden all under 1:53. That’s a new personal best for Seiberlich by almost a second. Abby Richter had the 6th-fastest swim of the morning and will join her Cavalier companions in tonight’s A-final.

NC State blunted the possibility of a huge point swing for UVA by getting three women into the top eight. Emma Muzzy and Elise Haan have both been sub-1:52, so it was not surprise to see them make the A-final, and Kathleen Moore will join them after shaving 0.05s off her lifetime best.

Duke’s Madeline Hess will be the final swimmer tonight after going 1:54.13, her 2nd-best time ever.

Mallory Comerford will have lane 4 in an individual final for the first time this meet after going 47.48 this morning. Comerford won the 500 and 200 free earlier this meet, but in both cases she appeared to take it relatively easy in prelims before dropping the hammer in finals.

Right next to Comerford tonight will NC State’s Ky-lee Perry, whose 47.53 was a new personal best for her. UVA’s Morgan Hill, who’s already won the 50 free and the 100 fly this week, and both by the smallest margin possible, was the only other woman under 48 this morning, touching in 47.91. That means that halfway through this morning’s prelims, UVA has put six women into A-finals, and NC State has put four.

Louisville and UVA both one additional woman into the top eight: Jillian Visscher for Louisville and Eryn Eddy for UVA, while Notre Dame (Abby Dolan), Georgia Tech (Haibing Wang), and Virginia Tech (Joelle Vereb) each will have one swimmer in tonight’s A-final.

With three women seeded in the top eight, this event might have turned the tide in UVA’s favor. In actuality, the opposite happened, as NC State put three up here and may have secured themselves the ACC title.

Freshman Sophie Hansson knocked 1.4 seconds off her seed time, going 2:07.97, as the only woman under 2:09 today. Teammate Julia Poole and Olivia Calegan will join her. Calegan improved her seed time by over 4 seconds, and took almost 3 seconds off her lifetime best, which comes from two-and-a-half years ago when she was still in high school. That was particularly a huge swim for Calegan, as by sneaking into the top eight, deprived UVA of another A-final swimmer.

Each of the three Cavalier women who had been ranked in the top eight added time this morning. In Vivian Tafuto‘s case, her time of 2:11.16 was still enough to get her into the A-final as the #5 seed, but Mary Christensen and Alexis Wenger found themselves on the outside looking in, sitting at #9 and #11, respectively. UVA got a total of four women into the B-final, so it’s not a total loss for the Cavaliers. Once we crunch the numbers after this morning’s prelims, we’ll probably see that UVA is still in the race, but they have a much more difficult path than they would’ve if they’d put one or two more swimmers up in this event.

Louisville put two up, including sophomore Morgan Friesen with the 2nd-fastest time of the morning, and defending champion Mariia Astashkina. FSU’s Nina Kucheran and UNC’s Lillian Higgs will also swim in tonight’s A-final.

Defending champion Grace Oglesby led the way this morning while cruising to a 1:54.64. She should be the clear favorite for tonight. Teammate Alena Kraus will next to Oglesby in tonight’s final after putting up the 3rd-fastest time this morning with a 1:55.69.

NC State and UVA both have eight A-finalists for tonight, and with an 18 point lead already, and several women projected to finish in the top eight of the 1650, NC State appears to be the in the driver’s seat heading into tonight, although UVA could make up some points in the 1m diving competition today as well. We’ll have full ups/mids/downs and scoring projections out shortly.

Wolfpack women divers show up big on one meter!

2
-1
Reply
The Wolf of Raleigh

UVA chokes and the WolfPack women cruise to victory.

UVA really did need the breaststrokers to pull through.

UVA used to dominate the mile. Sad state of affairs this year in that event.

Todd isn’t big on the mile.

So why are there no milers?

Do you think the pressure got to the breastrokers? That was the only event UVa seemed to underperform this AM!

NC state should have it – they will get big points in the 1650 and UVA will get almost none. That should do it.

UVA has no one entered in the 1650 so pretty sure they will get none in that event ;). Diving can be a huge factor here though as NCSU scored no points on the 3 meter springboard and all of UVA divers scored.

NC State has more upside in swimming finals (lots of 9th and 17th for UVA), but UVA diving is the equalizer. They’re very good at the 1-meter.

Could come down to the final relay, which would be in NC State’s favor.

Going to be a FUN session.

UVa has rolled 9s at a maddening high rate in these last 2 morning sessions. Is NCS likely to place 3 in top 8 of the mile? Combined with the 2 breast ups this morning NCS has 2 heavily weighted coins. I don’t know how it scores out on paper going into tonite, but unless UVa has some dynamite to throw in the diving event it looks like a bridge too far.

Math will be up shortly, but UVA did outscore NC State by 53 points on the 3-meter. And are probably a little better on the 1-meter.

We get to see the true #dinoeffect in action this afternoon!

Could you explain how the 1650 is seeded since they don’t have prelims? You mentioned Holub in the middle lane of the fastest heat but she’s not in the top 10 on the psych sheet of the 1000, so just curious.

FLwolfpack – notice on the psych sheets that the top 9 times are all seeded with 1000, not 1650 times. Psych sheets aren’t always good at handling that dichotomy, but when the race is actually seeded, they seed swimmers based on 1650 times. So, Holub has the 3rd-best 1650 time, so based on 1650 the middle lanes in the fastest heat (no circle-seeding) go to Stone, Cattermole, Holub. I think Robert means “a middle lane,” not “the middle lane” (lane 4).

Thanks! I did notice that the psych sheet was 1000 so wasn’t sure if I was missing something I’m not seeing the 1650 times anywhere.

I think Robert probably received a separate 1650 heat sheet that has it on there. Or might be on MM?

FLwolfpack – Sounds like we may have seen different psych sheets. The one on the ACC central only had four women listed with 1000 times. Check out the Championship Central link above for that one, and I’ve also linked to the 1650 heat sheets as well.

Perfect. Got it. Thank you!

Is there a link to the prelim heat sheets?