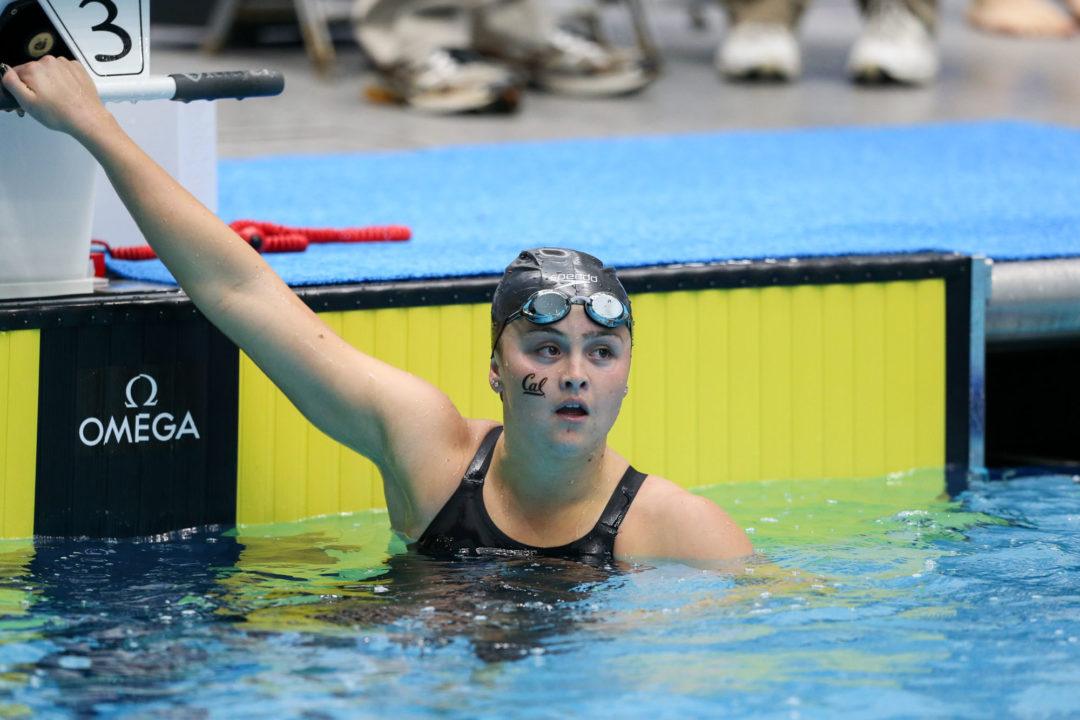 Katie McLaughlin has taken over for the now-graduated Farida Osman on Cal's 200 free relay. Archive photo via Tim Binning/TheSwimPictures.com

Cal was all over this relay last year, as the team of Abbey Weitzeil, Amy Bilquist, Maddie Murphy, and Farida Osman combined for an NCAA and U.S. Open record of 1:25.59– the American record wasn’t set with that swim, as Osman is Egyptian. This year, at Pac-12s, Cal set a new American record of 1:25.87 with Katie McLaughlin swapped in for the now-graduated Osman. Osman had a monster 20.91 split last year, and losing that leg will push Cal back to the field a bit, but this is still the best chance that anybody has at picking off Stanford in a relay.

At Pac-12s, Cal blitzed the rest of the competition with their 1:25.87– 2nd place Stanford was nearly a full second back at 1:26.81. Simone Manuel was 21.22 on the 2nd leg, followed by Lauren Pitzer (21.76) and Ally Howe (21.55). Janet Hu was only 22.28 leading off– her best is a 21.83 from 2013, and while Stanford doesn’t seem to have enough to catch Cal, a quicker leadoff from Hu could go a long way. Based on Pac-12 results, Manuel will probably be under 21 again next week, even after dealing with injury all year, which could pull them closer to Cal. It’s the Bears’ race to lose, though, and any wild split produced by Manuel will likely be matched, or almost matched, by Weitzeil.

In total, just six relays have been faster than 1:28.00 this year, with four, including Cal and Stanford, under 1:27. Virginia (1:26.67) and Louisville (1:26.92) are those two other teams under 1:27. UVA has seen big improvements across the board under head coach Todd DeSorbo in his first season, with seniors Caitlin Cooper and Laine Reed making marked drops. Cooper went from a best of 22.08 last year to 21.54 this year, and Reed from 23.05 to 22.06. Reed (21.51) and Cooper (21.03) proceeded to drop huge relay splits at ACCs, and the ‘Hoos look very good for a top 3 finish at NCAAs. Louisville, meanwhile, had three 21-mid splits from Avery Braunecker, Mallory Comerford, and Casey Fanz. The Cardinals’ had exceedingly young relays last year, including this event where they took 6th with 3 freshmen and Comerford. The group doesn’t necessarily have the name recognition of the teams ahead of them, but they have speed-to-spare.

Michigan, Auburn, and Alabama are all bunched up at 1:28 lows, followed by Texas and Texas A&M at 1:28.3 and a slew of other teams in the 1:28 mid/highs. A&M, in particular, will have its fate decided, probably, by the status of star sprinter Beryl Gastaldello. The senior missed SECs with an undisclosed injury, but raced at the 2018 College Station Sectionals, putting up times of 22.03 and 48.21 in the 50 and 100 free. If she’s on form, A&M could push through the pack and snag a top 8 spot– if not, they’ll have a difficult time making the A final.

Michigan is an odd case – they come in as the 7th-best relay, but last year, they had a poor swim in prelims, added a second, and missed the points altogether. They bring back the same 4 legs this year, along with an even faster seed time, and with the luxury of sliding freshman Daria Pyshnenko in for Vanessa Krause, depending on earlier performances. The other relay battling for the A-Final is Wisconsin, who was there last year, and while they lost Chase Kinney, they’ve slid the hot-hand of Beata Nelson onto the relay. That sprint group hasn’t had the same spark this year as they had last year, but if the relay comes together at NCAAs, their ceiling is probably top 5.

I really hope Cal win this one. Go Bears!

Weitzeil may or may not win the individual 50 free, but don’t be surprised if she posts the fastest relay split in history (20.6 or so). That’ll be the nail in this relay coffin.

And if the race is really close… don’t be surprised if she gets run down by Manuel.

How is Cal’s relay from last year not an American record? From my understanding Farida was born in Indiana. Is it cause she represents another country internationally? Is that how it works even if the athlete is an American citizen?

That’s correct – because she represents another country internationally, she can’t be an American Record breaker. The rules explicitly require American ‘sporting citizenship.’

The favorite team is usually very careful with exchange and the challenger can be aggressive. The difference can be easily up to 1sec. Since seed times are pretty close the relay exchanges can be the strong factor as it supposed to be because it the essential part of this type of racing.

While it totally makes sense logically that this would be true, history doesn’t bear out that “the favorite team is usually very careful” or that the challenger is any more aggressive, and most certainly not by a margin of a second. In fact, at each of the last three NCAA Championships, where Cal entered with the top seed and won, the comparative relay splits to #2:

Interesting anomaly – the 1-2 seeds have gone 1-2 in the relay in each of the last 3 years.

A tenth of a second difference across 3 starts is basically ‘margin of error.’ Nobody… Read more »

No doubts you know much more about college relays than me. My supposition was basically based on the American 800 relay at last WC in Budapest. Comerford and Margalis were extremely careful. For example, Japan team totaled at exchanges 0.51sec winning again Americans 1.23sec at this part of competition. But college finals is completely different type of competition where emotions prevail very often.

Maybe they were not that dominant to have a luxury to be careful. And maybe the team #2 valued their position as well to risk it. I would call 0.3sec reaction time a careful one and everything above 0.35 – safe start.
But most important is that in contrast to let say national relay team the college relay
team is more likely well trained to perform the exchange confidently. That may explain that teams are showing about the same reaction time.

I think TN will be faster and Auburn could sneak in the final..

On which leg do you see Stanford making up the full-second gap from Pac-12s?

It’s not one leg, it’s a team effort.

If every leg drops a little (.3 from Janet Hu, .3 from Ally Howe and .4 from Simone Manuel) it could happen. I don’t think Stanford will win, but it’s not impossible.

lol when I read that I thought the exact same thing. Even if every relay member gets better for Stanford don’t we think every swimmer for Cal could get marginally better? Murphy went 21.9 from the start, her best from last year (at NCAAs) was 21.7. Bilquist went a best time at Pac-12s in the 50 but has been faster in her 100 last year as compared to this year so she might have more in the tank. Katie Mac ha been a boss this year and who knows maybe she could drop another half a second. and it is entirely possible that Weitzel could go faster than a 21.00 from a relay start… her best flat start is 21.12.… Read more »

Stanford played it safe at P12’s. Their reaction times were really slow, in fact they gave 0.5 sec to CAL on the 3 exchange reaction times. Not saying CAL is not the favorite, they broke the record and deserve it. But Stanford will be better and will give them a run, just like last year.