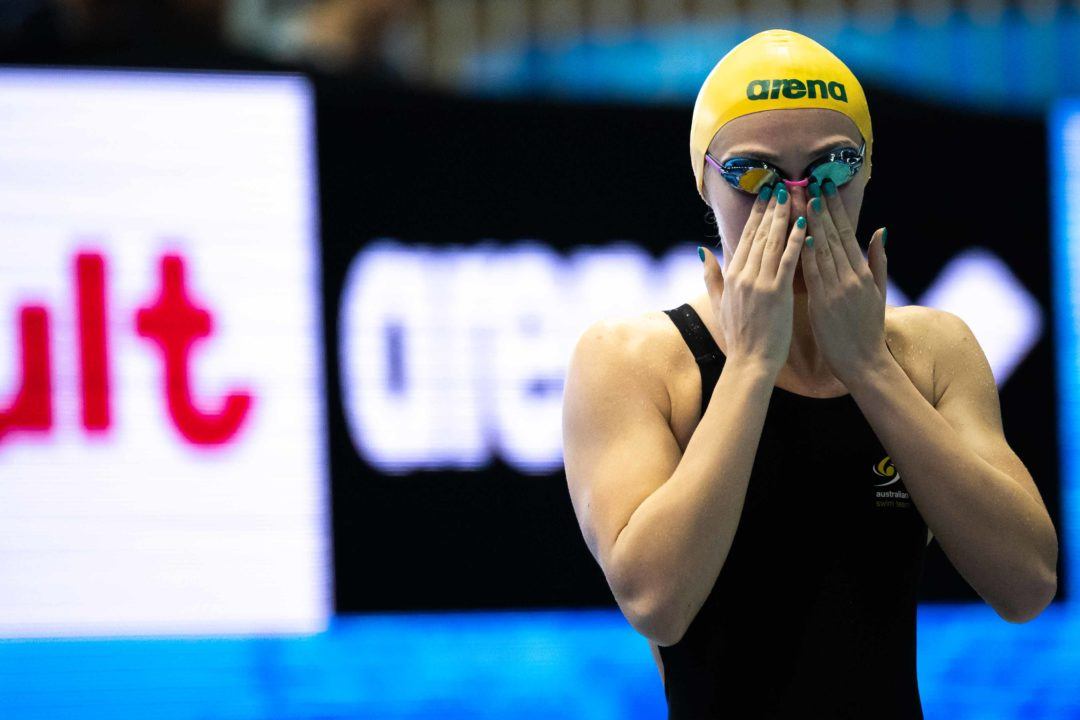 To see all of our 2018 Swammy Awards presented by TYR, click here.  2018 Oceania Female Swimmer of the Year:... Archive photo via Mike Lewis/Ola Vista Photography

Ariarne Titmus just missed a medal at the 2017 World Championships, but in 2018, the 18-year old broke into her own as the next bona fied Australian superstar.

Her year started with 3 golds and a silver at the Commonwealth Games, including a new Oceania and Meet Record in the 400 free. She ran into Katie Ledecky’s wake at Pan Pacs, but took silvers in both the 400 and 800 free in new Australian and Oceania Records as well, touching in 3:59.66 and 8:17.07, respectively.

She now ranks 3rd in history in the 400 (behind only Ledecky and Federica Pellegrini) and 11th in the 800 free.

Titmus graduated from ‘high potential’ to ‘here’ in 2018. She’ll have to swim most of her career against the greatest distance swimmer in history, Katie Ledecky, but she’s on pace to decimate at least the Australian Record books.

Ariarne then Jessica Hansen then Bronte . Improvement is the most important thing moving into 2019.

Should have gone to Cate Campbell

Had she not been “rolled” by C2 in the 100 at CG, then it would most certainly have been a far closer call as I agree her string of stupendous relay splits WERE something special. Mind you, it was a stellar swim & time from C2 (52.27) that stung her.

However I can agree with Titmus getting the nod, Her sub 4min 400 was the icing on the cake but placing herself in the top 3 for the year across 200/400/800 LCM plus her SCM World titles & WR appear sufficient justification.

Things could get dicey in Tokyo. Ledecky will have to be at the top of her game this time.

Do you think she wasn’t at the top of her game in Rio?

It will be good for Ledecky and the sport to have someone seriously challenge her in the 400/800/1500 at Tokyo.

Obviously she was, and she will need to get back to that shape to win the 400 at the rate Titmus is improving. But Ledecky hasn’t been in top form recently, and I do think it will take a 3.56 to beat Titmus in 2020. I agree that this competition is good for Katie

Ledecky improved by 1.89 from Pan Pacs to the Olympics. If Titmus does the same she will swim a 3:57.77. It is likely that it will take something faster than 3:57.94 to beat Titmus. but I do not think it would have to be under 3:57. I also think you need to look at the way Ledecky has been swimming her races recently. At Pan Pacs she was under WR pace at the 300 mark. It is as if she swims the first part of the race fast enough that she can set a record if she is really on her game that da and then she can always hold on for the win. If she feels vulnerable in 2020… Read more »

I agree… I prefer to see swimming rivalries .. they’re more fun to watch to see who would win .. who knows some unknown 15 yr old might win it all come 2020

I think Wannabe Thorpe was saying Ledecky didn’t need to be at the top of her game to win the 400 and 800 in Rio, which, given her margin of victory, is objectively true.

Whether it’s true that she’ll need to be in peak form to win again is up in the air. Titmus and that young Chinese swimmer (apologies, I can’t remember her name offhand) are on a good trajectory, but they’ve still got a bit to go before they’re near her best LCM times.

With the 200, Ledecky has always needed to be “on her game” to win at World level and this is even more the case now. With Titmus now sub 4min, 400 is now entering the same category. At 800 & 1500 (if she swims), she still has sufficient gap on the rest of the field. The next 18 months will tell us whether who (if anyone) can make any real strides at bridging these gaps.