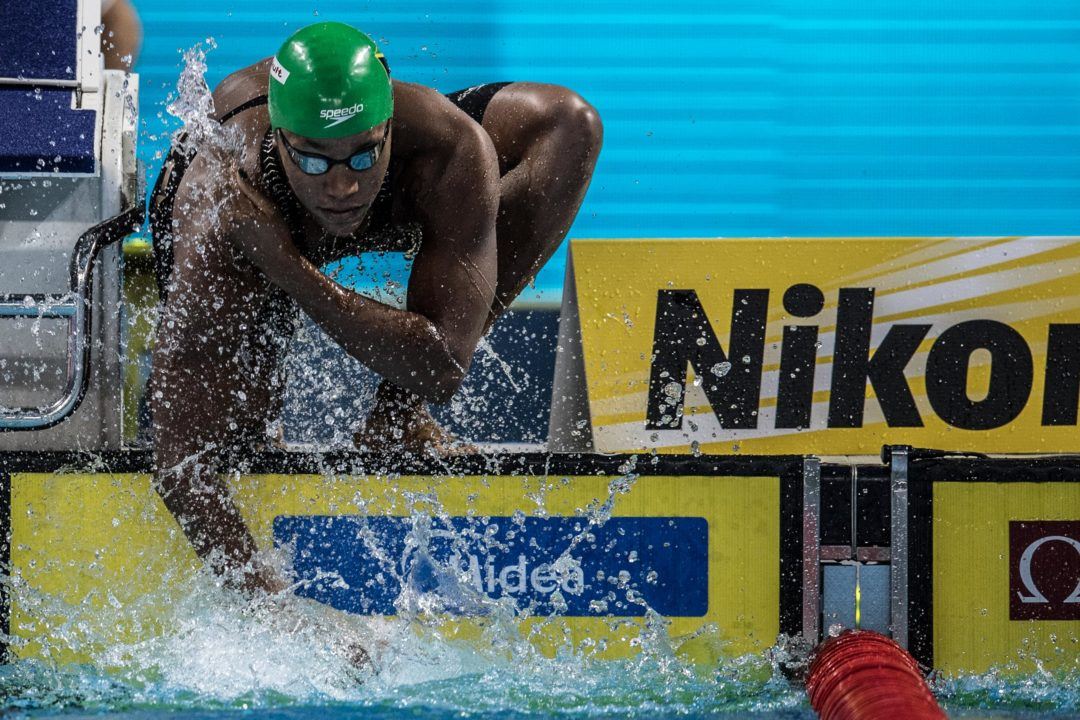 On the other hand, 100 breast co-world record holder Ruta Meilutyte returns to the competition. She missed the 2016 edition of Short Course Worlds, partially due to a 2015 elbow injury, and partially, as she’s more recently noted, because she was dealing with depression and mental health issues after a disappointing 2016 Olympic Games. Her return to short course competition provides some strong sprint competition for the more sprint-oriented Atkinson and Hannis, while the 200 is wide open.

In October of 2018, Atkinson lowered her own world record by a tenth, setting her up as the favorite at 2018 Worlds. But it’s fair to wonder if Atkinson will follow a similar pattern to 2016, focusing primarily on the big-money World Cup and swimming a bit off her best times by December. Still, with no King in the mix, Atkinson should be the clear-cut field leader – no one has been within six tenths of a second of her top time so far this year.

The intrigue comes with Ruta Meilutyte, who was the 2012 and 2014 short course world champ in this event before missing the 2016 version. Meilutyte hasn’t swum a short course 50 breast yet this year, but did go 29.36 last year and was a finalist. She still isn’t back to her 2013-2014 form, but even still, Meilutyte is good enough to contend for a medal.

With Russia’s Yulia Efimova not entered, Atkinson’s top competition might be American Molly Hannis, who went 29.51 on the World Cup earlier this year. Hannis actually has a pretty strong background in short course meters swimming for an American athlete. In 2016, she went 29.57 on the World Cup tour and 29.58 at Short Course Worlds, so it’s fair to expect another similar swim from her based on this fall’s performances.

Finland’s Jenna Laukkanen was fourth in this event in 2016, and she’s been within about a half-second of her best. Meanwhile her countrywoman Ida Hulkko has been steadily rising, taking fifth at the long course European Championships this past summer. Italy’s Arianna Castiglioni is one to watch from that Euros final as well – she won Euros medals in the 50 and 100 breast at age 21, going almost as fast in the long course 50 (30.30) as she’s ever been in the short course 50 (30.01). That suggests she’s got some time to drop.

Other names to watch: American Katie Meili hasn’t competed at all since July, but is a true speedster who went 29.37 on the World Cup tour in 2016. Australia’s Emily Seebohm is entered and has been under 30 this year, but the event falls on the same day as her 100 back, which should clearly be her priority. Seebohm could certainly swim both, but her focus will almost undoubtedly be on the backstroke.

In the 100, co-world record-holders Atkinson and Meilutyte will go head to head. Meilutyte first set the record back in 2013 at the age of 16, but she hasn’t bettered that time since. Atkinson tied the 1:02.36 mark at 2014 Short Course Worlds, beating Meilutyte by a tenth in a thriller for the world title. Atkinson re-tied the record in August of 2016. Though at age 29, she’s trending more towards the super sprints, Atkinson has already been 1:02.7 this season and should be the heavy favorite to defend her 2014 and 2016 short course world titles in this event.

Russian duo Vitalina Simonova and Mariia Temnikova have both hit lifetime-bests already this year and should be at least in the 1:04 range to contend for minor medals. Once again, expect Italy’s Castiglioni to far better her season-best, which one again barely outranks her long course season-best (1:06.54 in long course for Euros bronze; 1:06.00 in short course so far this season).

It’s the same story as the 50 for Meili, too – no competitions yet this year as she balances law school and a professional swimming career. Meili had a solid summer, but declined her spot on the 2019 long course Worlds team, suggesting she might be hitting the books hard this year and waiting for 2020 to make a bigger training run. Other factors: Spain’s Jessica Vall and Japan’s Kanako Watanabe (both of whom have been 1:05 this year and 1:04 in their careers) and Australia’s Jessica Hansen (who was a lifetime-best 1:05.14 earlier this year).

The 200 breast is much more of a toss-up, with Atkinson, Hannis and Meilutyte all not entered, world leader Yulia Efimova not swimming and all three 2016 medalists not present in 2018. China’s Ye Shiwen, known mostly as an IMer, is the second-ranked swimmer in the world so far this year, nearly three seconds behind Efimova but about a half-second ahead of Russia’s Temnikova, who is swimming in Hanzhou.

But the threat to watch out for is Spain’s Jessica Vall, who has only been 2:20.06 this year, but went 2:18.41 to win the Short Course Euros title last winter. The 30-year-old Vall has excelled at the 200 over her career, and could win her first World Championships gold in short course or long course this season.

Much of the rest of the field have personal-bests from quite a few years ago. Belgium’s Fanny Lecluyse was 2:18.49 back in 2015, though she’s been 2:19 the past two years. Japan’s Runa Imai was 2:19.24 all the way back in 2014, but she was actually close to that time last year as well. Fellow Japanese breaststroker Miho Takahashi was 2:19.09 way back in 2013, but she’s been two tenths off that time already this year. Spain’s Marina Garcia hasn’t hit her best since 2012.

The dark horses are China’s Yu Jingyao (lifetime-best 2:20.30 earlier this year), American Annie Lazor (who hasn’t swum a short course meters 200 breast since 2012, but did finish 3rd at U.S. long course nationals over the summer) and Argentina’s Julia Sebastian (who dropped a second and broke the national record earlier this year).