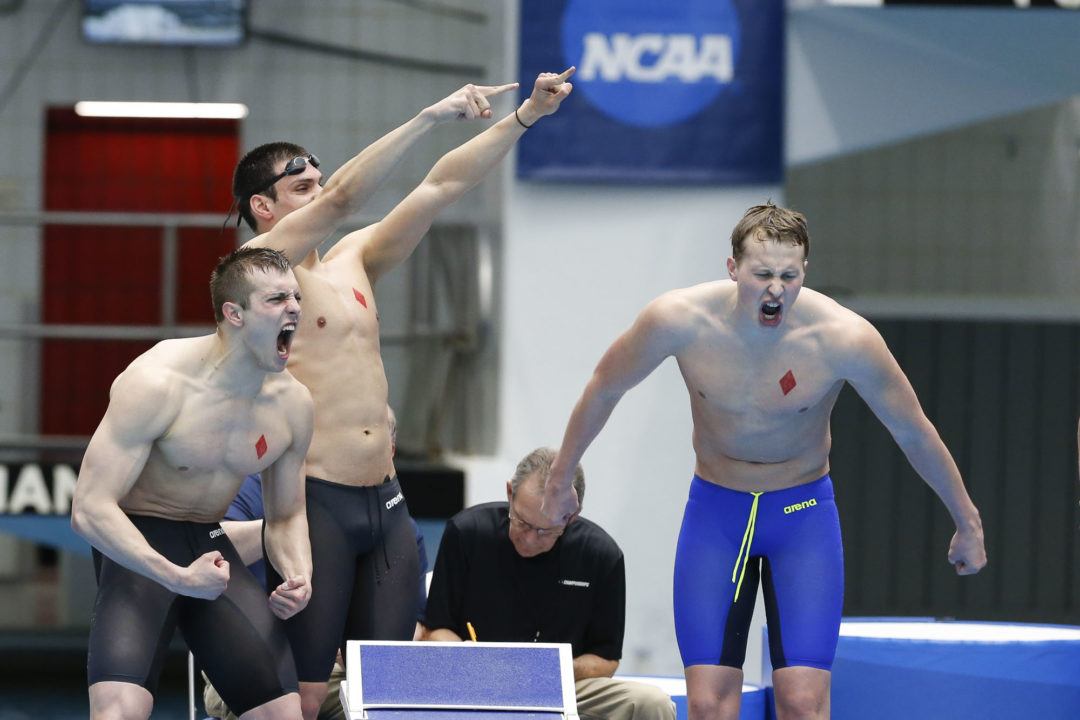 Once upon a time, about three years ago to be precise, the men’s 200 yard freestyle appeared to be stuck in a rut.  While Ricky Berens had set the American Record two years earlier, the overall record, a 1:31.20 by Simon Burnett, had been set in 2006, outlasting even the superuit era.  Meanwhile, the 800 free relay was stuck as the final event on the second night of NCAA championships competition, meaning that quite a few of the swimmers in the lineups had already swam two 200 frees earlier in the day and were visibly gassed by the time the relay rolled around.

Then, two things happened at the 2016 NCAA Championships that drastically altered the look of the 200 free at the college level.  First, the 800 free relay was moved from Friday night to Wednesday, becoming the only event on that day, meaning that swimmers were much fresher, and giving coaches some more flexibility with their lineups.  In a harbinger of things to come, Texas responded by obliterating the 800 free relay record. Second, Townley Haas descended on the scene.  The then-freshman popped the fastest split ever as Texas obliterated the 800 free relay record, and then two days later Haas finally broke Burnett’s ten year-old mark in the individual event.

Yes, there have surely been plenty of factors — increased emphasis on underwaters, for instance — but Haas’s swim was like the first pickle out of the pickle jar, and in the past two years we’ve seen an absolute explosion in both the individual 200 free and the 800 free relay.

Fast forward to tonight, and NC State broke its own record with a 6:05.31.  That averages out to a 1:31.3 per swimmer.  Let that sink in for a second.  Andreas Vazaios, Ryan Held, Jacob Molacek, and Justin Ress averaged 1:31.3.  That’s what the American Record was just three years ago (albeit on a flat start).

Not only that, but tonight Indiana’s Blake Pieroni beat Haas out to become the first man to dip under 1:30 on a flat start.  Even then, if the collective wisdom of the SwimSwam comments was to hold true, Caeleb Dressel could probably match or beat that time, which would add a 6th U.S. Open Record to his ledger.

Whatever the reasons — and feel free to discuss them below — it seems clear that we have emerged from the Dark Ages of the 200 yard freestyle and are now in a Golden Age.

Given the nature of swimming, eventually this run of improvement will fade and we’ll hit another plateau.  But in the meantime, sit back and enjoy the ride, folks.

Lastly, here are just a few of the swims tonight, good or bad, that stood out to us:

Maybe it’s just me, but swimmers on average look bigger, i.e. more muscular. I think there has been a shift away from pounding out yardage, which has allowed guys to put on more muscle and be stronger in the water. I know there have been some muscular swimmers, but that seemed to be rarer. Looking around on deck, most of the guys look pretty big. I would like to see average weights over the past several years.

Agreed. Finally going the way of track and field (quality over quantity, across the board), with coaches and swimmers more capable of procuring knowledge than in previous eras, and learning way more from each other than before.

Another point of focus is the “underwaters”. Given the speed/propulsion and energy required, it’s the highest efficiency stage of freestyle – the cost only being oxygen deprivation that may have to be paid later. But if a swimmer focuses on oxygen management and maximize their underwaters, this is another element in middle/long distance swims that was heretofore never exploited to its fullest. Our age group coach focuses underwater drills every day to build these oxygen reserves for competition.

NC State did not win in 2015. They got second to USC. Last year was NC State’s first NCAA title (ever?)

They won the 400 free relay title in 2016, with Held, Bilis, Schiellerup, and Dahl. I believe that was their first relay title. The 800 last year marked the second, with this being their third. Surprisingly, given how the 200 free relay was the one that (arguably) brought NC State onto the national scene, that’s the one free relay they have yet to win at NCAAs.

It truly is incredible the progression of this event, I didn’t think we’d see a 1:29 for at least 5 years and BOOM!! I still think a 1:30 wins the individual 200 because everyone won’t be as fresh, but I hope I’m wrong!