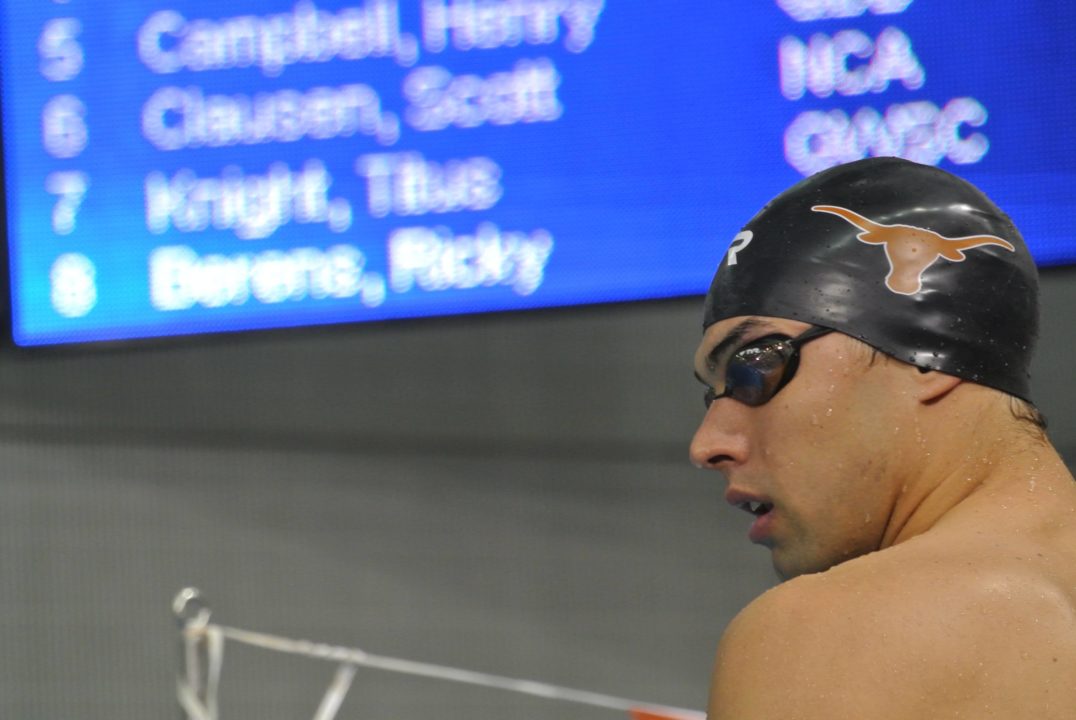 Ricky Berens, back in Austin, took down the American Record of a former college teammate. (Photo Courtesy: Charles Logan)

Ricky Berens almost retired after the 2012 Summer Olympics. He changed his mind, and for his troubles he’s been rewarded with a new American Record in the 200 yard freestyle.

The swim came on the first night of the 2013 American Short Course Championships (the meet is not a USA Swimming Sanctioned “national championship,” though it is certainly a counting meet, and is run by Longhorn Aquatics in Austin, where he went to college and has now returned as a volunteer assistant.

The all-time U.S. Open mark (swum by a swimmer of any nationality on US soil) still belongs to Great Britain’s Simon Burnett in 1:31.20 from 2006 (before the suit era).

Berens was only 9th in the prelims of this race in 4:29.05, but a medical scratch put him into the A-Final where he had his record-breaking performance.

For the split to be official, Berens had to finish the 500 free legally, which he did to officially transcribe it onto the books. He finished the 500, basically cooling down, in a 5:05.36, though that won’t be the number that is remembered by fans.

Awesome… his re-evaluation was a correct one!

Great swim, but I assume it is not an American Record if the meet was not sanctioned.

Who said it is not a sanctioned meet? The article stated it was not a “national championship” meet!

The article was edited after I wrote that comment.

The article was edited to add clarity after the comments both by you and WHOKNOWS. However, the original statement of “the meet is not a USA Swimming Sanctioned “national championship” still holds true.

Hopefully this means that Ricky has a fighting chance to be in the medal hunt this summer at worlds, if he gets a killer taper and a little luck from everyone else in the field. Also, perhaps he sticks around to do short course nationals in december, and gets at/under 1:30 🙂

He has a chance, of course, but a slim one.

There’s still Agnel, Yang, Tae-Hwan, Lochte ahead of him.

Great performance by Ricky Berens but not so surprising for him. First, he was already in 1.31.96 at the last short course nationals in Austin. Second, he always swims fast in-season. And I have always thought that the US Open and the American records were not very high in the men’s 200 free in SCY when you think to all the big names who have swum this race like Michael Phelps (but he didn’t swim SCY very seriously) or Ryan Lochte. When you think it’s still Simon Burnett who has been the fastest swimmer in the 200 free on American soil, it’s crazy! Yannick Agnel should come to USA for the next SCY season. Fully tapered he would crush the… Read more »

I agree with Bobo. The 200 free record has always perplexed me, as it has never seemed to be a particularly fast one. Great job for Ricky, and any American record is always going to be extremely impressive but there are faster people out there, definitely.

4×200 in Barcelona is going to be very interesting. I want to see what Conor Dwyer can pull off this summer.

As Conor trains with the Gators , we know how tough training is there . We have seen how well he swam in London ( impressive Relay swims around the 1.45….). If he is having a very good post Olympic year ( like Grevers or Adrian ), he will be very important in that 800 free relay to keep the pace with the French . I still beleive that Usa will win but by a very thin margin . They have won that relay how many times before ( remember the 2004 Olympic relay against the Mighty Aussies ) Klete Keller matching up with Ian Thorpe !!! We also know that Ryan and Ricky will be there and a third… Read more »

I wonder if this is the first time a man has set the AR in the 200 free as a split?