2018 Commonwealth Games On The Line For English Swimmers In Budapest 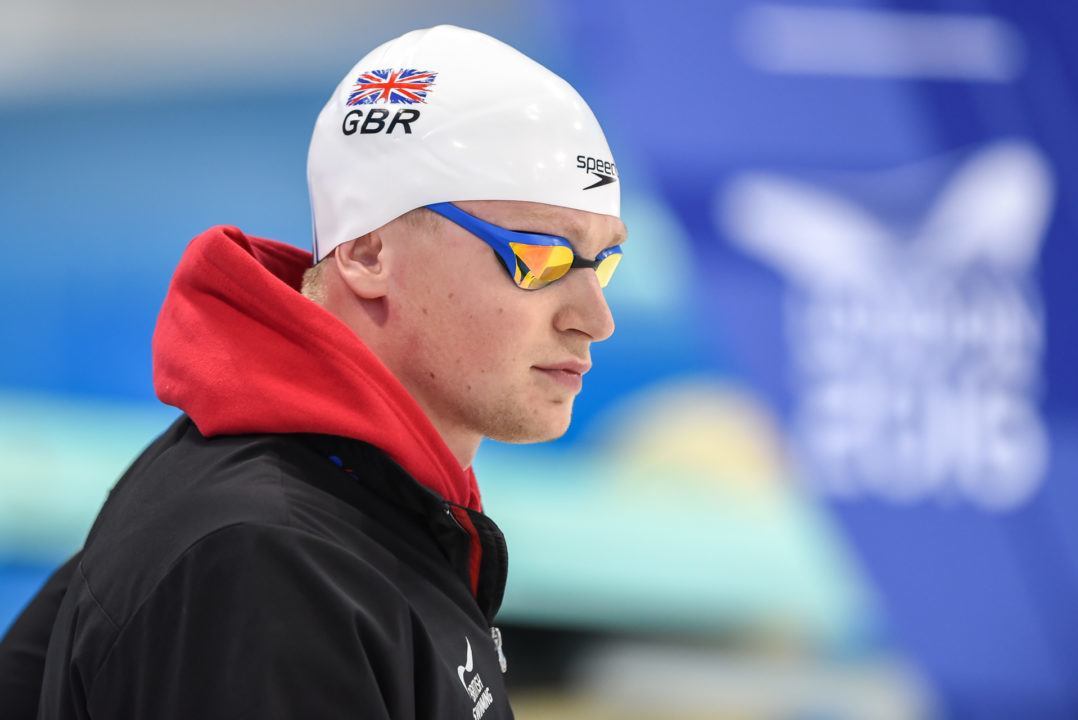 British swimmer Adam Peaty will be competing at this summer's World Championships, one of the qualifying meets for Swim England athletes wishing to compete at the 2018 Commonwealth Games. Archive photo via Peter Sukenik/www.petersukenik.com

Scotland was the first British nation to release its selection criteria for the 2018 edition of the Commonwealth Games set to take place in the Gold Coast, Australia, but England has followed suit with its own qualification standards. As with Scotland, Team England has set challenging time cuts in the hopes of bringing only the most likely medal candidates to the competition.

Per Swim England, up to a maximum of 32 swimmers will be selected for the roster, with additional selections for Para swimmers. The 32-swimmer roster will be generated in two phases, one via absolute discretionary invitations to athletes by the Commonwealth Games Federation, and the 2nd phase via competitive performances. The first of which is the FINA World Championships coming up this July.

Phase 2 nominations will be made based on performances achieved at the following competitions:

Although split times and relay lead-off times will not be considered, performance across all rounds of the aforementioned competitions will be taken into consideration, as long as the athletes have recorded a time that equals or betters the qualifying time listed in the table below. A maximum of 2 swimmers per event will be chosen to represent Team England in the Gold Coast and the criteria state that ‘nomination will be based on clear evidence of medal-winning potential.’

The times in that table will be hard pressed to medal at the comm games!

They’re not intended to be “medal markers” but indicative of what time it would most likely need to make the final at said event. Whilst a couple of these marks do look a tad generous, for the most part they look “ball park”. Of course, we cannot know at this point exactly who will turn up and whether they will be in peak shape or “training through” OR who’s giving it a miss. It would not be surprising if a number of teams may NOT send their full/”peak” teams but rather add a number of their development squad reps for experience purposes.

You seem to have a very low opinion about the CG’s. Yes it’s certainly not on the same level as the Olympics and WC’s but it is still a decent competition and one in which I can see all the major nations thereto taking very seriously. I for one will be very surprised if the Brits, Canadians and Aussies (especially the Aussies with it being a home games and all) do not field full strength teams. A number of high profile Aussie swimmers (e.g Magnussen, Campbell) have prioritised the CG’s over the WC’s so to dismiss it in the way you seem to do is, I think, a tad short-sighted. Moreover, being British myself, I would say Team GB will… Read more »

CG MAY’ve had the profile you suggest 20 years ago, 15 years ago and you could even mount a passably defensible case for mid 00s …… but those days are past !! Once upon a time, a CG gold might’ve snagged you somewhat of a public profile or even a corporate sponsorship deal but not these days. Hell, an Olympic gold is no guarantee in this much tougher economic environment. There isnt even major corporate $$$ being pumped into these Games. Public “care factor” ?? Realistically not major, you may see reasonable sized crowds to certain events/sports but then again Brisbane/GC is a population of around 3mill …. and these venues are much smaller than those seen in Melbourne in… Read more »

Again there should be some world class performances and even world records set as usual, anyone know if the pool is indoor or outdoor?

Much softer QTs than their usual standards for Worlds & Olympics; probably commensurate with CG’s relative stature in “the scheme of things”. One would hope that AUS would take note of this and copy the Brits in NOT holding a separate selection meet but alas their thinking remains as muddled as ever.

What WILL be interesting is whether all their top liners choose to peak for CGs or simply train through; and who (if any) may choose to give it a miss. Given the timing of CG, following close on after NCAA’s/straight off SCY, the latter may also be a very real scenario for those competing in Nth American collegiate system. Whilst potentially a nice hit-out for the Brits, they… Read more »

Timing is unfortunate for north american high school swimmers also. Commitment for a Canadian swimmer is March 20 – April 16 and likely similar for British kids too. Some will be able to swing it but some just won’t be able to take that much time off.

Which is precisely my point that CG really shouldn’t be seen as a season priority for ANYone other than those planning on making it their farewell to intl competition.

No chance of anyone swimming through CG. It will be used as a selection meet for the season ‘benchmark’ Europeans….

The only flaw I see in this selection criteria is for a relay only swimmer heading to Budapest who isn’t a junior. There really isn’t any other opportunity to Q for CWG in an individual event or a second event.

I think they are changing the Winter Nationals in December to LCM and they will use it as another chance to qualify – Phase 3 as they call it in the selection policy.

2
0
Reply
anonymoose
Reply to  He Who Remains Unknown