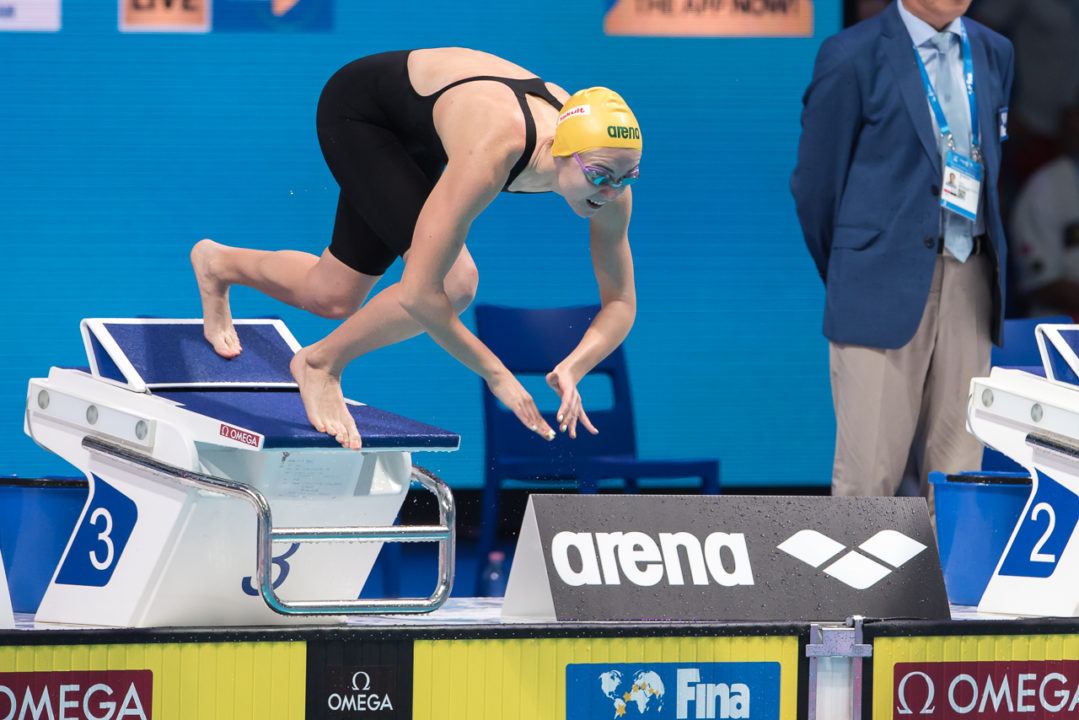 Aussie distance standout Ariarne Titmus smashed the Games Record here, dominating the race in 4:00.93. That swim makes Titmus the 6th fastest performer in history and the 3rd fastest performer in textile. Titmus flipped in a quick 1:58.86 at the halfway mark, stretching out her lead through the back half to win by nearly 5 seconds.

Ben Proud was just .05 shy of his time from the semis, racing to a 21.35 for the gold. Proud is still the fastest man in the world this year by far with his 21.30 from last night. South African sprinter Brad Tandy was just shy of his semis time as well, touching in 21.81 to clip Aussie Cam McEvoy (21.92) for the silver.

Emily Seebohm (AUS), Kylie Masse (CAN), and Georgia Davies (WAL) were stroke-for-stroke down the stretch, but Seebohm took a slight edge in 27.78 to out-touch Masse (27.82). Davis followed closely in 27.90, clipping Australia’s Holly Barratt (27.96) for bronze.

Australia’s Clyde Lewis took off with the early lead, but fellow Aussie Mitch Larkin pulled up quickly on the backstroke leg. Scottish IMer Duncan Scott started to close in on Larking on the breast leg, but Larkin was able to get the job done as he won in 1:57.67, a new Games Record, to Scott’s 1:57.86. Lewis held on for 3rd in 1:58.18, followed by Scottish IMer Mark Szaranek (1:59.24).

Australia’s Lakeisha Patterson raced to gold in 30.14, coming within a few tenths of the World Record. A pair of Canadians, Morgan Bird (32.03) and Abigail Tripp (32.49), rounded out the podium, while Australia’s Tiffany Thomas Kane was just shy of the podium at 4th place in 35.40.

Jack McLoughlin (AUS) and Daniel Jervis (WAL) battled closely for the gold. McLoughlin picked up the lead early on as he flipped ahead at the 100. Fellow Aussie Mack Horton pulled into 2nd after the 200 and stayed within tenths of McLoughlin as the approached the 800. Jervis picked up the pace, moving into 2nd with 300 to go. He tried to chase down McLoughlin down the final stretch, but came up short as McLoughlin won in 14:47.09 to Jervis’ 14:48.67. Horton wound up 3rd in 14:51.05.

Australia downed the Games Record as they hit the wall in 3:54.36. Emily Seebohm led them off with a 59.52 as they trailed the Canadians, who got a 59.02 from Kylie Masse. Kierra Smith (1:06.68) kept Canada in the lead through breast, but butterflier Emma McKeon (56.42) started to close the gap for Australia. Bronte Campbell finished the job with a blistering 51.57 anchor split.

It was Australia on top again with Mitch Larkin leading off in 53.14. England fought back, however, with a 57.64 breast split from Adam Peaty to take the lead. James Guy put up a 50.95 fly split to slightly extend England’s lead, but Olympic champion Kyle Chalmers hammered home in 47.25 to give the Aussies the win in 3:31.02 and a new Games Record. Ben Proud anchored for England in 47.93 as they touched in 3:31.13 for silver. The fastest fly split of the field today was a 50.10 from South Africa’s Chad Le Clos.

She definitely said after her heat swim this morning that she didn’t get a lot of sleep as a result of it being held last night.

I thought they used the same/extremely similar scheduling at all international meets i.e. Comm Games/Worlds/Olympics. So annoying.

Swimming events at Olympics and World Championship run for 8 days, it’s 6 days in the CWG. There had to be some compromises made.

Worlds and Olympics are over 8 days. This was only 6. The events aren’t exactly the same tho.

It’s the same events as in the Olympics.

I try to forget though…

Titmus smashes her PB and got so damn close to that 4 min mark!

Only a matter of time.

Pan Pacs titmus vs Ledecky and Leah? Too bad Bingjie will be at Asian Games

Outstanding double meaning (re. “Only a matter of time”) 😀

Looks like Titmus is the real deal. She could have gone a bit faster in the first 50.
Her 800 should have been faster though.

What’s Titmus 400 free ranking in textile?
Ledecky, and then Smith?

Titmus has many more PBs coming soon (in many events) hopefully.

One special swimmer, Timus is.

If Ledecky is still slumping in the 3:58s, maybe she’s vulnerable. None of these rivals (yet) have shown a hint of getting down to 3:56.

None of her “rivals” have hinted at being 3:58 lol. They’re still 3 seconds off at the closest.

Ledecky is a freak, 3.56 is just out of this world. The other girls are closing fast, but Ledecky is also a racer, she loves a challenge.