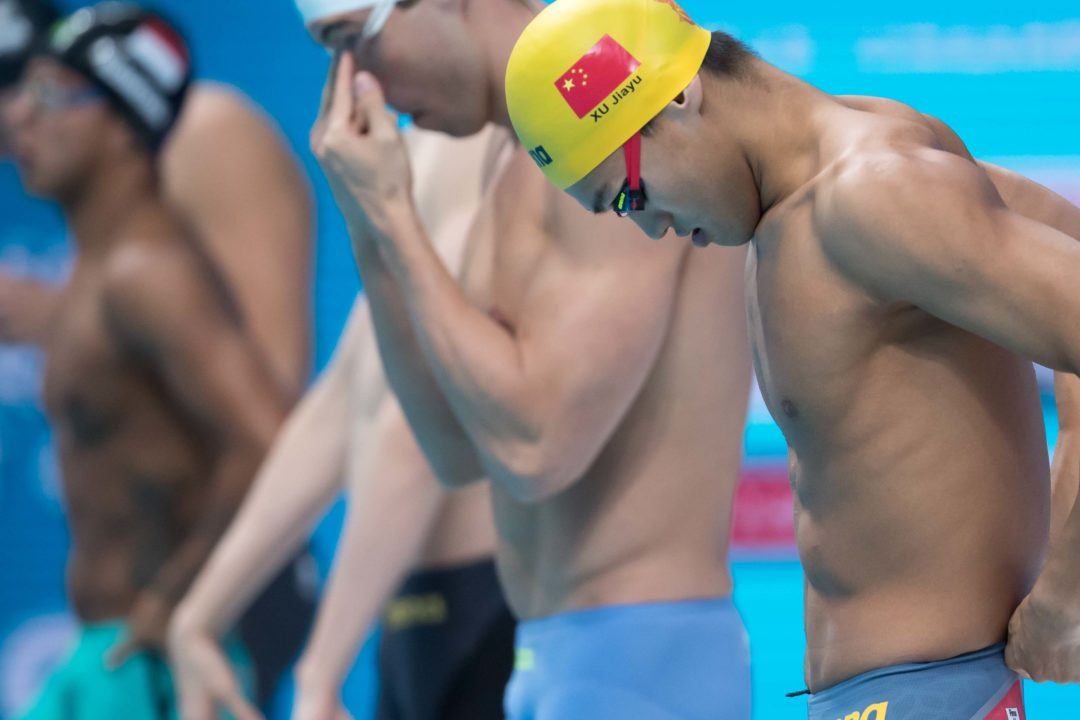 China’s Wang Jianjiahe led teammate Li Bingjie by a few seconds to set the pace, but it ended up being a very close finish. Bingjie made a big push on the last 100, closing the gap by nearly 2.5 seconds, but she came up just short as Jianjiahe touched in 15:53.68. That topped Bingjie (15:53.80) by a tenth. They were well ahead of the rest of the field as Japan’s Waka Kobori (16:18.31) was about 25 seconds back to take bronze.

Japan’s Katsuhiro Matsumoto (1:46.50) and China’s Ji Xinjie (1:46.68) were neck-and-neck into the finish in the battle for silver, with Matsumoto slightly outpacing Xinjie on the back half to clip him at the touch. Jordan’s Khader Baqlah, an SEC champion for the Florida Gators, was a tenth shy of the podium in 1:46.77.

The defending Asian Games champion Akase Sayaka, still only 23-years old, was left off the podium, shut out by the Chinese pair and her countrymate Natsumi Sakai, in the women’s 20 backstroke final.

South Korea’s Dasol Im was 5th in 2:13.66. That’s an add of more-than-a-second from the prelims time that had her ranked 3rd after Sunday morning.

28-year old Japanese swimmer Ryosuke Irie opened in exactly the same split that he used en route to the 2014 title in the men’s 100 backstroke, but he didn’t have quite enough to run-down the fast-starting Xu Jiayu and claim a 3rd-straight title.

Instead, Xu used a nearly-half-second advantage at the turn to win his first-ever individual Asian Games title in 52.34. That swim tied the Asian Games record that Irie set when he won the 2014 title.

Japan, for just the second time since the first Asian Games in 1951 (where they didn’t compete), failed to put two swimmers on the men’s 100 backstroke podium, with the other occasion coming in 1998, where they had no medals in the event. It wasn’t China, however, that locked them out. There was a huge gap between Irie for silver and the rest of the field, but South Korea’s Juho Lee was the best of the bunch, taking bronze in 54.52. Japan’s Masaki Kaneko was 3rd in 54.61. Kaneko was about three-tenths better at Pan Pacs a week ago.

China’s Li Guangyuan was 5th in 55.01 followed by Vietnam’s Paul Nguyen in 6th at 55.72. Li added seven-tenths of a second from his prelims swim.

The Japanese duo of Satomi Suzuki and Reona Aoki both were under the old Asian Games Record in the women’s 100 breaststroke, but Suzuki came away with the title by a margin of .05 seconds.

Shi was 3rd in Sunday’s final, swimming a 1:07.36, followed by her countrymate Yu Jingyao in 1:07.44. China had won this event in 7 of the last 8 Asian Games, but Japan has now won the other 9 titles in total, for the most-ever by nation since the race was added to the 1958 Games.

Aoki was the faster of the two Japanese swimmers at the Pan Pacific Championships, where they swam this race 10 days ago. At that meet, she took bronze in 1:06.34 while Suzuki was 4th in 1:06.51, but Suzuki was able to carry forward to the 2nd meet better, dropping time to win  gold.

After a slow start to the session, Japan finished strong with a second-straight gold-silver performance, this time in the men’s 200 fly. Daiya Seto repeated as champion in 1:54.53, which is about half-a-second slower than he was for his 2014 win; while Nao Horomura took silver in 1:55.58.

Both swimmers have been faster this year, and rank in the top 5 in the world in the event, but the story of this meet so far has been the lack of lifetime-best, or even season-best, times for the participants. Horomura has been 1:53 already in 2018, for example.

18-year old Rikako Ikee led off Japan’s relay in a new Asian Games Record of 53.60, and ignited the relay as a group to new Asian Games and Japanese Records in the event.

The old Meet Record in the event was a 3:36.88 done by China at the 2010 edition, which included anchor Tang Yi, whose individual record Ikee broke with her leadoff. The old Japanese Record of 3:36.74 was done in prelims at the 2016 Olympic Games.

This race was another streak-buster, with China having won the last 5 editions, dating back to 1998. On Sunday, they too were under the Meet Record, but with only one 53-second split (a 53.68 from 16-year old anchor Yang Junxuan), China couldn’t run-down the early Japanese lead.

Hong Kong took bronze in 3:41.88. That put them on an island of sorts, 5 seconds behind China for silver, but two-and-a-half clear of Singapore for 4th. Hong Kong got that medal without their top freestyler Siobhan Haughey, who has been dealing with a foot injury.

Once again, the greatness of Agnel’s 1:43.14 is underlined. Even Phelps, at 1:43.9, and Thorpe, at 1:44.0, weren’t all that close. (Let’s ignore the tech-suited swims for the moment.) There’s been a lot of talk this summer about the disappointment of not having anyone break 1:45 this year, but just because it’s been done doesn’t mean it’s not a formidable barrier. Agnel was out in 50.6 foot touch, and back in 52.5; that’s just mind-bogglingly fast on both ends. He was a 46.7 relay leg at the same meet, and had also swum a 400 in 3:43. To beat him — or just equal him — is going to require that kind of speed, along with that kind of endurance.

Yep. London 2012 gave us 4 incredible youngsters (Agnel, Katie Ledecky, Missy Franklin, Ye Shiwen) and only Ledecky went on to sustained success. The other three went through injury and mental issues (particularly grief from Muffat’s death in Agnel’s case) and all three almost gave up swimming very soon after 2012. Agnel and Franklin both went through major coaching and club changes as well.

Missy Franklin’s 200 back in London is something I can watch again and again. She was half a body length ahead of the super suit record line from start to finish.

I didn’t name Meilutyte and Chad le Clos (who is only two months older than Agnel, because they won close races in “normal” times. Missy and Ye set world records, Agnel and Ledecky would have set world records if not for super suits. All 4 blew the competition right out of the water (more than a body length ahead).

Then it will be fair to mention 1:53.6 of Allison Schmitt that is still remains unbeaten. She wasn’t that “old”. Just turned 22 in June 2012. And wasn’t ever close to this time after London. Her race was as much exciting as Ledecky’s, Agnel’s, Franklin’s and Ye’s ones.

Breaking 1:45 is still a formidable barrier. It doesn’t matter if 5 swimmers broke 1:45 in 2011. It,s still a formidable barrier. It usually takes a perfect race or once in a life time fast race from all swimmers or a perfect individual swim from one swimmer to break 1:45. Breaking 1:44 is another matter altogether. It,s even more difficult when swimming in 3 rounds. Swimmers question themselves. Should I go for it in the semi,s or in the finals.Going for it in the semi,s can leave them dead in the finals, if they push too much. But if they cruise in the semi,s they may end up out of the finals. The 200 of all strokes are the most… Read more »

To echo the perfect race theme above, remember that when MP did the 1:42.96 at Beijing he said that it was a “perfect swim? https://swimswam.com/10-michael-phelps-world-record-races-video/

Phelps straight up dominated that race, super suit and all.

1:45 is actually a really old time. Yevgeni Sadovyi
came close in 1992, and Thorpe and PVDH went 1:45 18 years ago. It’s time to stop putting mental limits on performance in the 200 and start recognizing that the race has stagnated except for Agnel in textile.

Times will stagnate whether we like it or not. Records can’t be broken forever. Look at track and field.

Unless they bring back the suits in the future, which will be unfair to swimmers who didn’t use the suits, like Adam peaty, Ryan murphy, etc.

Yeah, you would think if Lochte and Phelps can do it, even when they’re swimming a bunch of events, you would think other swimmers, who don’t even swim half the events those two guys did, could accomplish that. Then again, those guys are transcendent swimmers so maybe not a fair comparison.

anyone have a link to the livestream?

See if this works: https://tv.toggle.sg/en/tv/shows/asian-games-2018

Thanks. Excellent quality with a competent english commentator – only needed an asian vpn to view it.

Which vpn are you using?

Singaporean. havent tried any other vpn but any asian one should work.

Can’t watch it in the US due to “rights agreement”. Other links?

Use an Asian vpn

Wish it worked – the toggle reads that permission isn’t granted.

Let’s hope Quah can obtain a bronze medal in 200 fly. Looking at his heats time, it is not too promising.