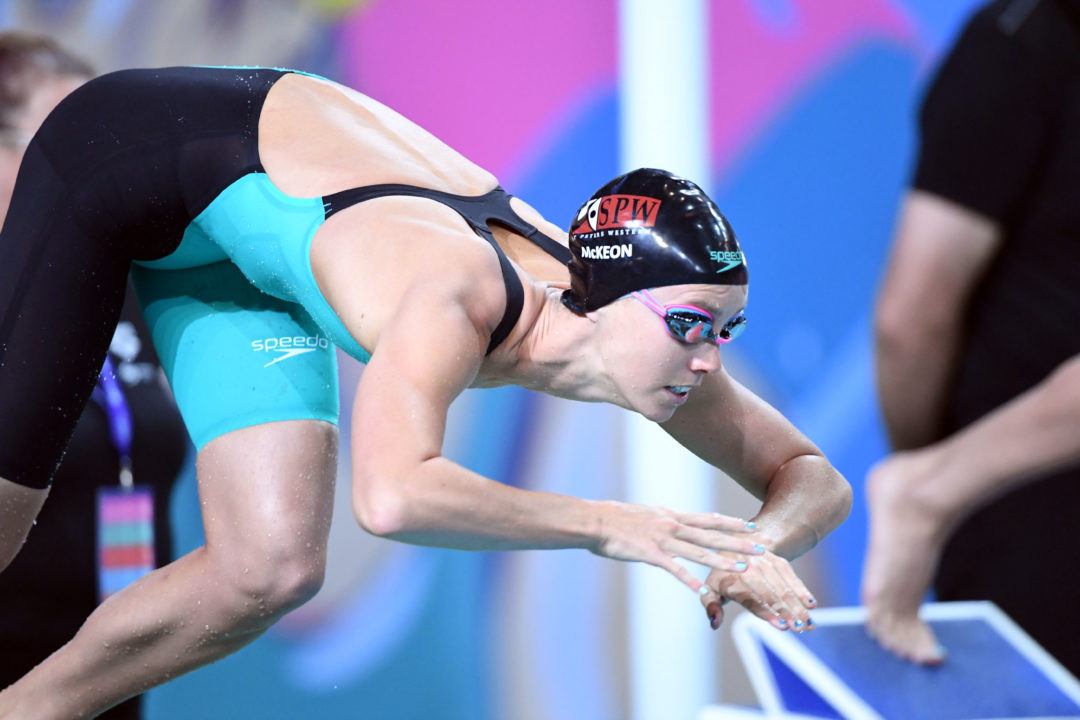 Ledecky has a clearer path to gold, and so does McKeon for silver. Archive photo via 0Delly Carr / Swimming Australia Ltd

With Sarah Sjöström out of the picture to focus on her sprints, Katie Ledecky has a much clearer path to gold than she did last year. It was a battle of titans in Rio between the Swede and the American, with Ledecky fighting off a late charge to hold on for the gold. Now, it’s not looking very likely that Ledecky will have quite as tough an opponent as Sjöström later this month in Budapest.

If anyone is going to push back, however, it’ll be Federica Pellegrini or Emma McKeon (or both). Pellegrini, the world record holder, has medalled in this race countless times. Pit her experience against McKeon, a younger (though not Ledecky-young) Australian competitor who beat the Italian Pellegrini in Rio, and you have an interesting dynamic between experience and fresh talent. The 200 free is not a race to be swum without strategy– McKeon likes to take it out fast, and she was out ahead of both Sjöström and Ledecky at the 100 mark in Rio. Pellegrini and Ledecky are better closers, though Ledecky obviously puts it all together the best.

McKeon (1:55.68) and Pellegrini (1:55.94) have swum similar times this season. The Australian came into Rio with a 1:54.8 from Aussie Trials, and earned the bronze in 1:54.9. Pellegrini came in with a season best 1:54.5, then fell six tenths to fourth in Rio. McKeon has to be favored to upgrade to a silver behind Ledecky this summer.

Another Swede, Michelle Coleman, posted a lifetime best 1:55.64 at the Stockholm Open this April. She is a very fast in-season swimmer, like Pellegrini– she was 1:55.8 in the months before Rio but was 7th (1:56.27) in Rio. If Coleman can match or improve upon her best in Budapest, she could catch Pellegrini off her game and sneak in for a medal.

Interestingly enough, Katinka Hosszu decided to enter this race after not swimming it in Rio. Hosszu is great in the 200 free, and her 1:55.41 PR from the Dubai World Cup stop in 2015 is a really strong time. She does have a heavy schedule, taking on the 200 fly, 200 back, 100 back, 200 IM, and 400 IM, but so does someone like Leah Smith. The American will race the 200 through 1500 free as well as the 400 IM, amassing 3300 meters of prelims swims only, excluding any relay swims. These women are tough enough to make the final, and Hosszu maybe a medal, but they will be feeling the load of their other events if they swim this final.

Ai Yanhan and Li Bingjie will lead the Chinese women, while Mary-Sophie Harvey will be one of the Canadian entrants in this event along with Katerine Savard. Ai and Li are both just 15, while Harvey is 17. Li is made more for the 400 free, where she’s a medal threat, but both Chinese women are very talented young prospects. Harvey will be more fun to watch in the 400 IM, but she continues to develop her mid-distance free, and this could become one of her strong points in a couple of years.

Japan’s Rikako Ikee would be another young name to watch, but FINA’s app doesn’t show her among the two entries for Japan into the event. Ikee was a 5-event national champion for Japan, and this event makes the most sense for her to drop, especially considering the big role she’ll have to play on most of her nation’s relays.

Meanwhile, Femke Heemskerk and Charlotte Bonnet are two big European names who will be hard to get past for the final. Bonnet (1:55.80) of France is one of a flurry of 1:55’s this season, with Heemskerk of the Netherlands not far back (1:56.28). Heemskerk faltered in Rio, missing the final, while Bonnet touched 8th. If they’re on form, though, they should find themselves racing in the final.

Dark Horse: Hong Kong’s Siobhan Haughey. She’s the 2nd-best LCM 200 freestyler currently in the NCAA (yes, Leah Smith is no longer a collegiate swimmer) behind Ledecky with her 1:56.91 PR from Rio. She’ll have to lop off at least five or six tenths, but a finals berth could be in store for her.

I was surprised to notice how similarly looking are splits of Coleman and of Sjostrom. Both swimmers approach 200 free race as long distance one. The times of the second, third and fourth fifties are practically identical. In 2016 Sjostrom was able to improve her in-season time by 0.3 sec in Rio. I think Coleman has same limits and she won’t drop 0.6sec to be under 1:55. But her efforts can still be pretty much awarded by a silver medal. Pellegrini was the second in Kazan with 1:55.32. I don’t see the field this year to be stronger than it was two years ago.

Ai Yanhan reminds me of Van Almsick. She has impeccable technique. If there’s anyone I’d watch to potentially crash a podium here, it’s her. Bingjie is more a 400/800 swimmer.

Logically you’d think her 200 fr would thus improve but it doesn’t always go like that .

It will indeed be interesting to see whether McKeon ever has a real crack at the 200fly at some point as she has most certainly shown domestically over the past 2 years that, without specifically training for it, she is already capable of a time (2.07) that is borderline internationally competitive.

The issue is that “something will have to give” for her to do so and the reality is that in her current main events; she is already medallist level at 200fr and fringe medal contender level at 100fr/fly

Whilst she could most certainly have a run at it at CG, one has to ask … to what end ? It might actually be quite tough to medal in that… Read more »

This is a race I do look forward to. Sure no one can challenge KL like SS did in Rio (closing in on the last 50, who predicted that..? ).. but the race and the tactics for silver and bronze…? Fun! Will Coleman try to keep pace a liitle bit, will Fede save the juice, will Femskeerk deliver when it matters, will there be a young chinese challenge or willit be McKeon who gets some of the limelight? And Hosszu?? Wide open behind KL

This field being so deep even without SSS (Sweden’s Sarah Sjostrom). <3
Semis are going to be a cluster(BLEEP).

Ledecky likes to take her third and last 50 split identical.
I mean really identical.
If it’s more than one time, I wouldn’t call it as coincidence.
Her two swims at Austin 2016(I’m pretty sure she had another identical swim, forget where though):

I guess this is what she meant “down to a science”.
Let’s see if she could make it this time.

The third 50 is the most difficult part of the race at 200 for Ledecky. This season she is trying to keep it under control. As soon as she manages to make it under 29 sec without vomiting she will be ready to challenge Pellegrini’s world record.
The perfect splits at 200free belongs by far to Allison Schmitt. Ledecky was very close to replicate it in Rio shouldn’t she make a mistake at second turn. I think she lost about 0.2-0.3sec by starting this turn too early and losing the strength of the push off the wall.
Similar as in Sjostrom’s case 200 distance is a very uncomfortable race for Katie Ledecky. At 200 her progress was the… Read more »