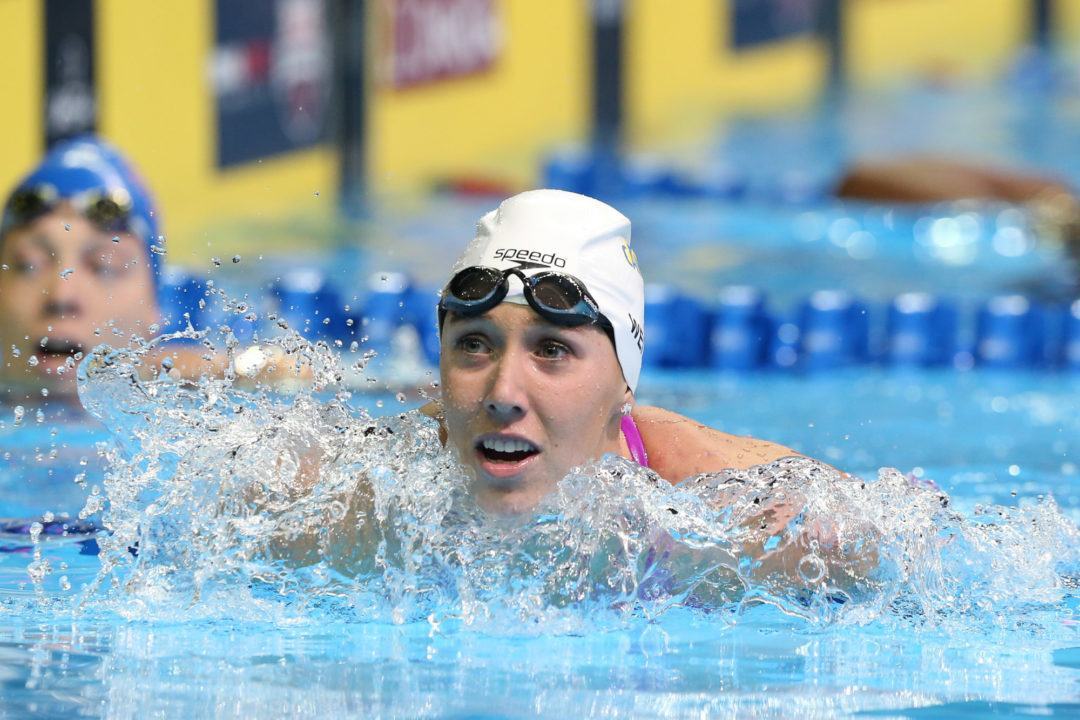 If Stanford aims to complete a sweep of all five relays at NCAAs, the 200 free relay might be their toughest test. In a way, that's good for the Cardinal, as it comes at the beginning of day 2, just the second swimming event of the meet. On the other hand, it could mean a big momentum swing that affects the remainder of the meet for every team in contention for the title. Archive photo via Tim Binning/TheSwimPictures.com 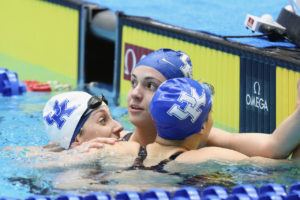 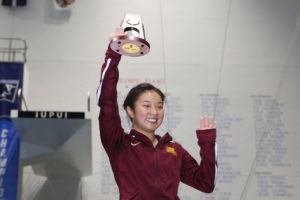 Yu Zhou of Minnesota won the Big Ten Diver of the Year award. 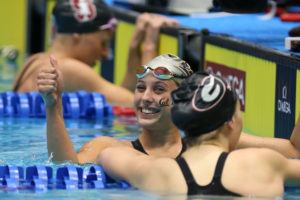 If Stanford aims to complete a sweep of all five relays at NCAAs, the 200 free relay might be their toughest test. In a way, that’s good for the Cardinal, as it comes at the beginning of day 2, just the second swimming event of the meet. On the other hand, it could mean a big momentum swing that affects the remainder of the meet for every team in contention for the title.

Cal comes in with the top seed with their time from December’s Georgia Invite. The Bears were 1:26.31 there, just a tenth ahead of Stanford’s 1:26.44 that won the Pac-12 title in a head-to-head battle between the two rival programs.

The showdown is pretty interesting when broken down by individual matchups. Each team has a ringer they’ll probably use as their leadoff legs. Stanford’s Simone Manuel is the 2015 NCAA champ and Olympic 100 free champ, while Cal’s Abbey Weitzeil is the American record-holder in this event, competing at her first-ever NCAA Championships. Weitzeil pulled out of the final day of Pac-12s with a medical issue – if she’s back up to full speed, this is a race, if not, it’ll be Stanford running away with it.

Cal still has Farida Osman, who was second at NCAAs in the 50 last year and is probably better in the splash and dash than Stanford’s second-best leg, Olympian Lia Neal. Neal trends a little more toward the 100, while Osman is better at the drop-dead sprint pace of the 50. Cal has some options for their other two legs: Amy Bilquist and Maddie Murphy swam it at Pac-12s, but Valerie Hull was on the relay for the Georgia Invite and for last year’s NCAA Championship-winning team. Kristen Vredeveld was also on the title-winning team a year ago. For Stanford, it’s likely to be star flyer Janet Hu and backstroker Ally Howe, though Lindsey Engel was the team’s anchor last year. Engel had a nice split, but did false start and DQ the relay.

Both programs should have straight 21-second splits. We’ll take Stanford based on the strength of Hu (21.6 at Pac-12s) and Howe (21.2 at Pac-12s) against Cal’s third and fourth swimmers. There’s also a decent possibility we see one or more 20-second splits. If Manuel or Weitzeil for some reason move out of the leadoff spot, they’re almost surefire 20s. Osman could break 21 herself, and it’s not out of the question that someone else could pop a massive split in a tight race with a big atmosphere.

Georgia is the forgotten team in this race, taking third last year and getting Chantal van Landeghem back from an Olympic redshirt. Olivia Smoliga is the defending NCAA champ in the 50 free and the only swimmer in the nation who can keep pace with Manuel and Weitzeil on leadoff duty. Georgia will have freshman Veronica Burchill in a clutch position after she split 21.9 at SECs.

Look for NC State to go after this relay – that’s what their men’s program did the past few years in trying to make an impression on the national stage. The Wolfpack men had to deal with two years of false start DQs before they finally broke through for the win, so the women’s program will either take heed and go safe on their exchanges or hang everything out there, risking a DQ for a shot at a high finish – that’s a high-risk strategy, but in this event in particular, it’s got the chance of pretty big reward tied to it.

The Wolfpack has a shot at straight 21 splits with a foursome featuring one swimmer from each class: freshman Ky-Lee Perry was the ACC champ in the 50, Natalie Labonge is the senior leader, junior Krista Duffield led the team with a 21.6 split at ACCs and sophomore Courtney Caldwell was 21.7 on her split.

ACC rivals UNC come in just five one-hundredths behind after a nailbiter for the conference title. Hellen Moffitt might be the best individual of the bunch, but UNC will struggle to find a fourth leg who can keep pace with the Wolfpack. Caroline Baldwin is good for a 21-high leadoff and Sarah Hitchens can split 21 as well. It’ll be up to freshman Brooke Bauer, who was 22.2 at ACCs, to push the team any higher than 5th.

Big Ten champs Wisconsin should be in the mix, with Chase Kinney (21.4 on her leg) among the nation’s best splits. The Badgers also have a lot of time to drop from their seed based on relatively slow relay exchanges at Big Tens. Ohio State has an elite leg in Zhesi Li (21.0), but probably not the depth to do much more than fight for one of the last few A final slots.

Arizona’s got an exciting young roster that hit a pair of 21-mids (21.8 leadoff from Katrina Konopka and 21.5 from Annie Ochitwa) way back in December at the Texas Invite. The Wildcats didn’t show much of their hand at Pac-12s, so this team could blow up this week if Laura Kurki and Morgan Ginnis can get under 22. Both were 22.18 midseason on their splits.

Tennessee finished as national runners-up last year, but graduated half that relay. Maddie Banic could be 21-low this time around, and Kira Toussaint could lead off in 21 if all goes well. Star freshman Meghan Small is more of a rangy IM type, but if she can drop a 21, the Vols could rise fast.

Dark Horse: USC Trojans. For whatever reason, USC hasn’t put it together in this relay yet this year. 3 of 4 legs from last year’s 4th-place relay are gone, but the Trojans reloaded with top-ranked freshmen Tatum Wade, Louise Hansson and Stanzi Moseley. Anika Apostalon returns as a top-shelf leadoff piece. The other three are probably better suited for the 100 and 200 frees, and if USC gets in trouble with entries, they could use their fab freshmen in other relays instead. But this team’s got potential to be straight 21s, and the Trojans have been known to swoop in from out of nowhere for a big relay win – for reference, see last year’s 400 free relay.