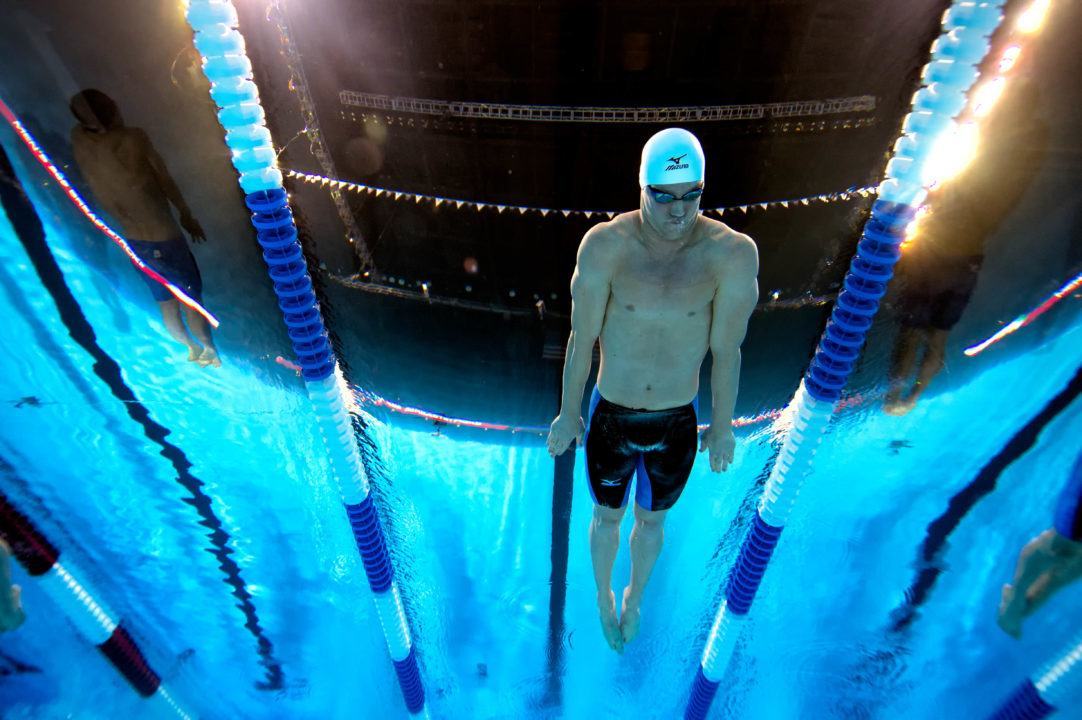 Kevin Cordes is the American record-holder, but he'll have Olympic bronze medalist Cody Miller on his tail in the 50 breast at U.S. Nationals. Archive photo via Mike Lewis/Ola Vista Photography

Take American record-holder Kevin Cordes for instance. Cordes was best-known early in his career for the earth-shattering lows to which he took the American 200 yard breaststroke record. But last summer, he actually finished better in the 100 breast at Olympic Trials, and still holds the American record in the 50 from Worlds in 2015.

Cody Miller is cut from the same cloth. Known more for his 200 breast in college, Miller has become the fastest 100-meter breaststroker in American history and won bronze in Rio.

The interesting part about projecting these 50 meter stroke races is that we just don’t know how much of a priority each swimmer will place on an event that only yields one automatic World Championships roster spot – to the winner. In 2014, the last time U.S. Nationals featured the 50 breast, Miller won the national title in the 100 but didn’t even swim the 50. As such, we’re assuming most pure breaststrokers will swim this race, but it’s very likely we see some scratches or some notable absences on the entry sheet.

That will make room for some younger swimmers, or perhaps some vets looking to track down the two Rio Olympians. Andrew Wilson seems the chief contender for that role. Wilson just wrapped up a historic Division III career at Emory and has the fastest 50 breast time in the nation this year at 27.55. That lifetime-best came just a couple weeks ago, and blew out his previous best by eight tenths of a second. Wilson also had a couple of solid 23-low splits in the 50-yard breaststroke at NCAAs.

A few more pros to watch along with Wilson: Georgia grad Nic Fink was in this final in 2014 and has been swimming well so far this season. He doesn’t have an official 50-meter breaststroke swim on record since the fall of 2015, but in Santa Clara earlier this month, he did swim a 50 free that it appears he swam breststroke. Fink’s time was 28.04, which would be within a tenth of his lifetime-best breaststroke time.

Just-graduated Texas Longhorn Will Licon joined a rare club this spring, becoming one of only a handful of men to break 23 seconds in a 50 yard breaststroke split. Licon hasn’t swum a 50 breast since 2012, and has actually never broken 30 in an official swim. But as a 1:00.3 in the 100 meter breast, it’s pretty clear Licon can race with the top dogs here if he enters. Licon’s main choice that day would be between the 400 IM and 50 breast. The 400 IM has two Worlds qualifying spots to the 50 breast’s one, but Licon has also moved away from the 400 IM recently, ditching that event in favor of the 100 breast at NCAAs this past year.

Josh Prenot is the flip side of that coin. Prenot is a sub-minute breaststroker who is clearly capable of a 27-second swim. But Prenot has made the 400 IM a key event, and probably has a better shot to make the Worlds team in that IM. He could certainly handle combining both on day 3 of Nationals, but it might not make much sense to tax himself with another race when his qualifying odds seem so much higher in the IM. And history has proven that swimming two 400 IMs in one day is brutal enough; why make things harder for a non-Olympic event?

Brad Craig was 9th in this event in 2014 and is still going strong at age 28. He hasn’t looked great yet this year, but a taper probably means more in ones late-20s than it did earlier in a career.

The rest of the field should offer some youngsters a chance at an A final spotlight. Michael Andrew is an obvious candidate. The 18-year-old has traditionally been very good at the sprint stroke races, and as of last summer, breaststroke appeared to be rising to become his best stroke. The event lineup could cause issues, with the 50 breast sandwiched between the 100 fly and 50 back on day 3. But Andrew is no stranger to event doubles, and the USRPT program he subscribes to bills itself as the ideal preparation for a lot of racing in a short period of time.

Reece Whitley, recent Cal commit and the #1 rising high school senior in the nation, should be a factor here. He’s got the size to be a monster in the sprint races, though the flipside would be that tall breaststrokers sometimes have a harder time hitting the rapid-fire turnover that goes with a 50. Still, Whitley was 28-low in this event last spring and has a very real shot to break into the 27s.

Keep an eye on Jacob Montague, who’s had a whopper of a calendar year leading up to this event. He was a breakout star at last summer’s Junior Pan Pacs, winning gold in the 100 breast and setting lifetime-bests in four events. He then packed up and headed to Ann Arbor, where he blew out his best yards times in the 100 breast, 200 breast and 200 IMs over the course of his freshman year with Michigan.

There’s a handful of guys coming off of college season who could conceivably be threats, but who haven’t swum any long course meets since NCAAs. Michael Duderstadt, Carsten Vissering and Peter Kropp would fall into that category.

Dark horse: Connor Hoppe. The Cal rising senior is coming off of lifetime-best 100s in long course (at Olympic Trials) and short course (at NCAAs) over the past year. He hasn’t swum an official 50 meter breaststroke since 2015, but did go 28.40 at Nationals back in 2014. He was also among the fastest splits on the 200 medley relay at NCAAs and will probably put a premium on speed this summer with a focus on the 100 and 50 more so than the 200.

Don’t sleep on Nic Eriksson, he went 27.9 at the Charlotte Grand Prix last year. The decorated royals swimmer has been training with David Marsh for the past 6Months, you never know.

I think Wilson gets 2nd to Cordes, and Miller out of top 2, I want to see Wilson make the team.

if Cordes gets entered! i say Wilson and Andrew

Michael Chadwick or Jacob Molacek could have a surprisingly strong showing.

Chaddy is not a bad breaststroker, saw him go 54.0 in season, but he’s probably

Yes, it is, a very decent shot. I might call him and Wilson the two favorites, especially since I think they’ll prioritize this race a little more.