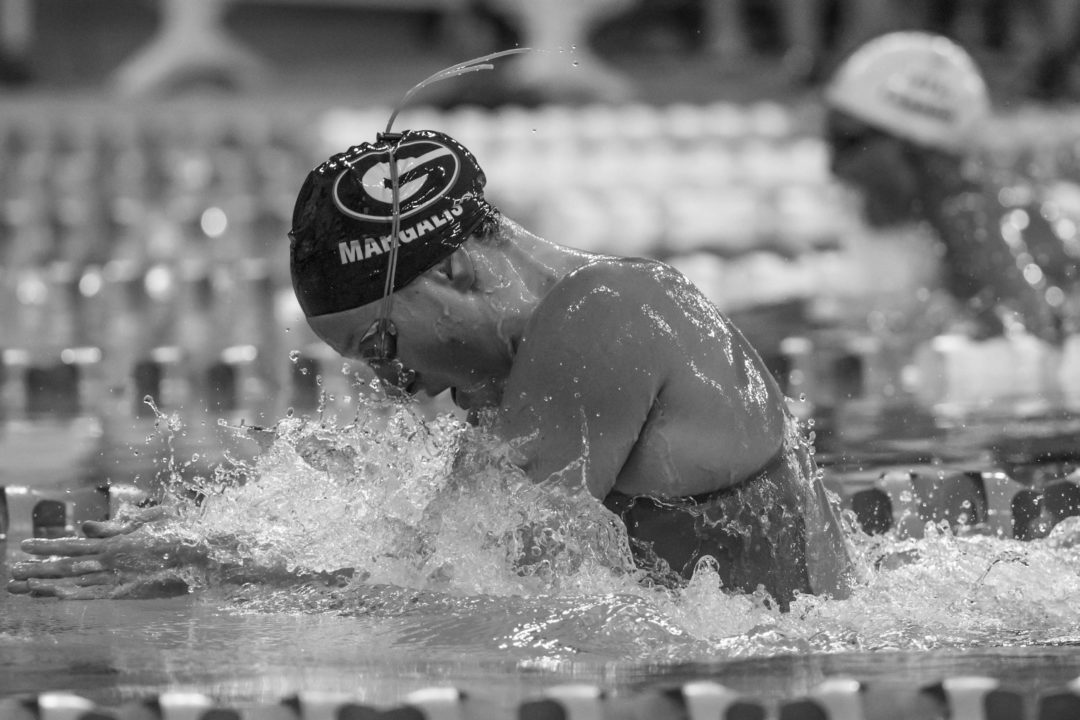 Former UGA Bulldog Melanie Margalis is now the clear leader of the US contingent in this event. Current photo via Mike Lewis/Ola Vista Photography

Maya DiRado was arguably the breakout sensation of the 2016 Olympics, capturing hearts and minds with three individual medals, including a bronze in the 200 IM.  Undoubtedly, Team USA is going to miss her poise and performance.   It’s going to be tough to gun for gold as long as Katinka Hosszu is in form, but the US has some proven performers who should be in hunt for medals this summer.

Former UGA Bulldog Melanie Margalis is now the clear leader of the US contingent in this event.  She finished just out of medal position in Rio, placing 4th.  She didn’t suffer from any post-Olympic slump, as she is the current point leader in the Arena Pro Series.  Notably, she took first place finishes in the 200 free, 200 breast, and the 200 IM in Austin in January.   She sits 8th in the world at the moment, a season best 2:10.43 coming from the Indianapolis PSS stop, and she looks primed to be among the contenders for a spot on the podium at Worlds.

Margalis is not the only US woman ranked among the top in the world.  Madisyn Cox ended her college career at Texas with 3rd place finishes in both IMs at the NCAA championships in March, and has kept the momentum going through long course season.  She is currently ranked 12th in the world with a 2:11.14 from the Mesa PSS.   She finished 4th at Trials in this event, so with DiRado and 3rd place finisher Caitlin Leverenz both out of the way, the time is now for Cox to snare one of the top two spots.

To grab one of those spots, Cox will have to outduel Stanford’s Ella Eastin, who certainly figures to be among the top tier of swimmers here.  She holds the US Open and American records in the yards version of both the 200 IM and the 400 IM.  She was upset at NCAA’s in this event in March, but otherwise had another great season, following up her stellar freshman year with an American Record in the 400 IM.  Her season best time is a 2:14.04 from the Mesa PSS.

The lady who upset Eastin, Cal’s Kathleen Baker, did so while swimming the 2nd-fastest 200 IM ever in short course yards, but she hasn’t swum the event in long course since Winter Nationals in 2015.  She does have some international experience under her belt, placing 10th (and 4th among US swimmers) at the 2014 Pan Pacific Championships.  If Baker chooses to swim this event, she should be in the thick of things in the A final.

Veteran Elizabeth Beisel has had some success in this event, but is coming off an extended post-Rio break, and it’s not clear yet whether or not she’ll swim this at Trials.  Likewise for Athens’s Hali Flickinger, who’s been as fast as 2:12.88, but has only swam this event once since 2015.

Texas A&M’s Bethany Galat, one of our picks for a top two spot in the 400 IM, is pretty good at the shorter IM as well.  She sports a lifetime best of 2:12.29 and finished 6th at Olympic Trials.  Right behind her at OT’s was Tennessee’s Meghan Small, who actually hasn’t done any long course competition this season, but is good enough that if she swims, she should final.  UVA’s Kaitlyn Jones missed making either IM final at NCAAs, but finished 10th at Olympic Trials, and could make a run at the A-final.

15 year-old Alex Walsh of the Nashville Aquatic Club appears to be one of the up and comers in this event.  best time of 2:14.37.  Lakeside Swim Team’s Brooke Forde will be training with Eastin next year at Stanford, and sports a 2:14.59 season best time, from the Atlanta PSS stop.

Melanie is the favorite, no doubt.

Ella Eastin is waiting for a LC breakthrough. She and Leverenz both looked heartbroken after the 200 IM at the OT. Melanie had an incredible charge to the wall in the free leg to get by them.

I think Margalis breaks 2:10 but I like the rest of these predictions

Margalis and Cox for me.
Maybe a bronze in Budapest but it will be tough.

Slightly Surprised escobedo wasn’t a darkhourse for the 3rd time

I think Margalis will probably break 2:10. Cox and Eastin also could be faster but we’ll just wait and see how it plays out

I think Baker places higher than 5th if she swims this event. She’s a better long course swimmer than Eastin and still beat Eastin at NCAAs.

I really think Walsh could challenge top 2. She has really solid times in all strokes and closes very well.

I think she will be a big contender in 2020 but right now her butterfly is still too weak in my opinion.