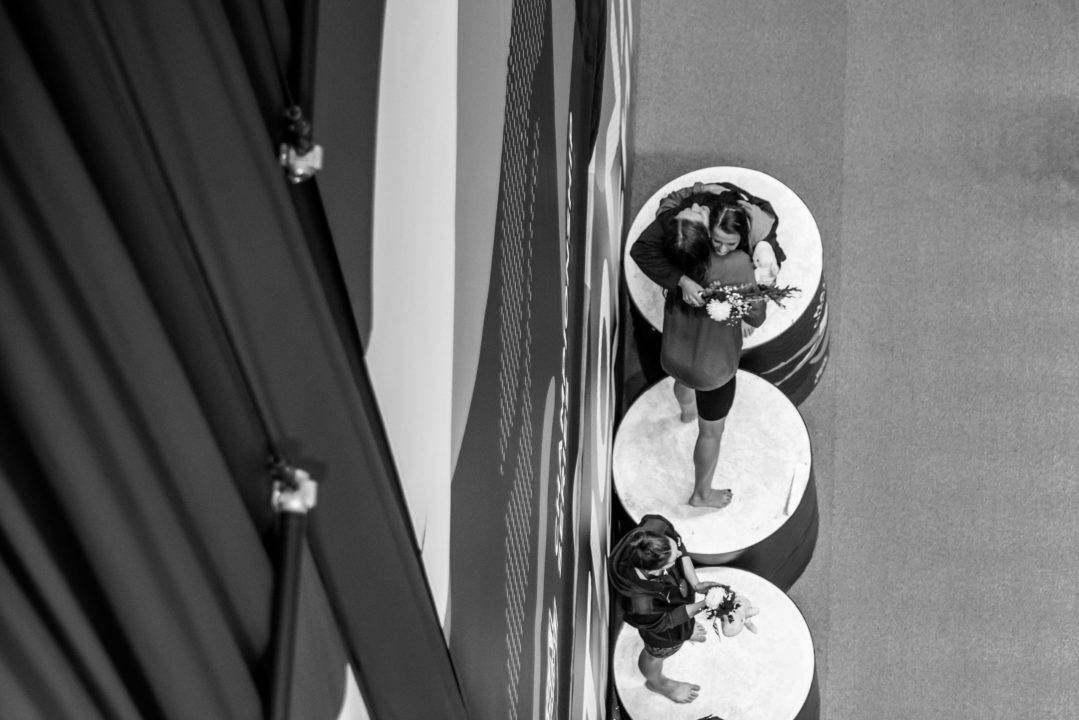 Swimming is a sport full of incredible highs and lows.  Here’s a few thoughts that went through my head as I watched the top swimmers — and their reactions — on day 4 of the 2017 U.S. World Championships Trials.

While I certainly agree with Rowdy’s wish, I have to admit I found myself ho-humming Ledecky’s victory in the 400 freestyle tonight.  It was the third-fastest swim ever, which should be something amazing.  But Ledecky has spoiled us so much over the past five years that it’s a bit hard not to anticipate — at least a little bit — that a world record can be set every time she jumps into the pool, and just be ever so slightly disappointed when that doesn’t happen.

Leah Smith, meanwhile, may be the most content 2nd place swimmer on the planet, even after earning a national title herself in the 400 IM yesterday.

Definitely a different story here.  Zane Grothe didn’t exactly come out of nowhere — he finished 4th in this event at Olympic Trials last summer, and he’s been having a great season.  Yet, the men in the middle two lanes were the last two NCAA champions in the 500 yard freestyle and Rio Olympians.  Grothe is now three years removed from his collegiate career, where he was an All-American many times for Auburn, but never finished higher than 4th in the 500 free.  He elected to continue his swimming career, now training with Indiana, and the move has paid off as he earned his first individual entry for a major long course US squad, and he couldn’t look happier after the race.

Lilly King reacted to her win tonight by…nodding her head.  No fist pumps, no splashes, no jumping up on the lane line or wagging her finger.  She’d already won the 50 and the 200 breast this week, and clearly she’s already looking toward Budapest and the inevitable showdown with Yulia Efimova.  2nd place went to Katie Meili, who earned a bronze medal behind the aforementioned swimmers in Rio, and while she may not have been quite as confident as King, she’s a veteran who knows the deal and gives the U.S. a very duo in Budapest.

Ok, so Kevin Cordes and Cody Miller going 1-2 here wasn’t exactly shocking.  We’ll move on to other subjects in this race.

The most iconic image of the entire evening may have taken place on the awards podium after the race.

Will Licon, the 6th place finisher, placed a reassuring hand on Josh Prenot, a Rio Olympian who placed 7th tonight and has yet to make the team this week.  Prenot looked wholly less-than-pleased while receiving his medal.  Licon certainly feels his friend’s pain.  He is one of the most successful breastrokers ever in yards and has come tantalizingly close to making a big US team, but hasn’t quite cracked into that top tier of long course swimming.

Both men will have to one more chance to make the squad tomorrow.  But, in one of those ironies, they will face off against each other in the 200 IM, and in all likelihood, one will have to beat the other to finish in the top two.

A big smile and a sign of relief from Kathleen Baker as she won her second victory of the week, this one in a U.S. Open record setting time.  Baker is the defending Olympic silver medalist, but Olivia Smoligia won the domestic title last year, and Baker’s time eclipsed a mark previously owned by the likes of Missy Franklin and Natalie Coughlin.  Smoligia finished 2nd and looked just as thrilled, as the two will representing the United States together for the 2nd year in a row.

Another big smile, this time from the Gentle Giant, Matt Grevers.  He stuck it out for (at least) one more go around after missing out on the Olympic team last year, and we’re all glad he did.  The 32 year-old veteran had been a crucial part of most U.S. international teams for the past two quads, and while we were glad to see David Plummer finally make the Olympics, and Ryan Murphy set a world record, something just didn’t quite seem right with Grevers left behind.

Murphy, tonight, touched 2nd behind Grevers and didn’t show quite the same amount of emotion.  He’s another one who, like Ledecky and King, is already thinking ahead to Budapest and his quest to for another double gold as he stands in the stead of a tradition of great American backstrokers.

I noticed that moment between Licon and Prenot too. Nice to see the sportsmanship and I hope they both have good things ahead of them.

So will Murphy probably not end up swimming the 50 in Budapest. Because Ress win the 50 and Grevers win the 100