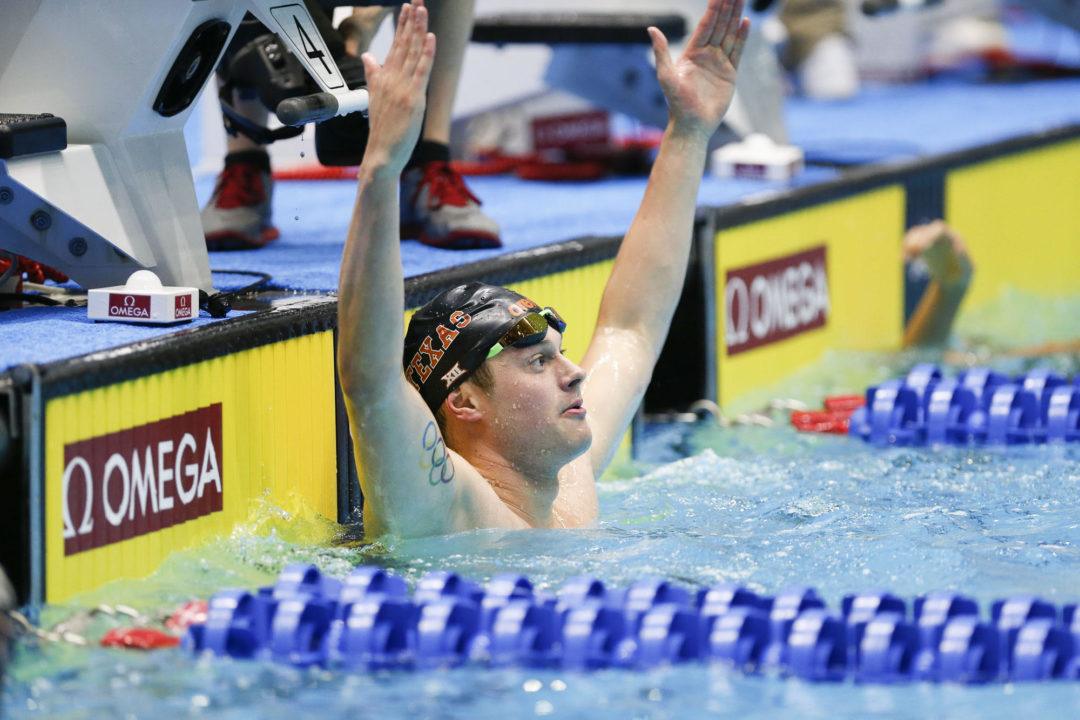 Jack Conger and Tom Shields headline a group of men in the 51-low range who could become the first swimmers other than Phelps to break 51 seconds since the end of the supersuit era. Archive photo via Tim Binning/TheSwimPictures.com

The men’s 100 fly was one of the closes races at the 2016 U.S. Olympic Trials. That could prove no different next week in Indy at the 2017 World Championship Trials. The only non-returners from last summer’s Olympic Trials finals in this event are Michael Phelps and Will Glass, meaning the field is still completely stacked. There are several men entered who have been 51-low, setting up a race that could come down to the wire.

Olympic finalist Tom Shields headlines the psych sheets in this event. He made his first Olympic team in both butterflies last summer, and showed no signs of backing off after Rio when he became the first man to break 44 with his 43.84 at the 2016 U.S. Winter Nationals. Shields finished just off the podium in this race with a 4th place finish at the 2015 World Championships in Kazan. He swam his personal best 51.03 at that meet, and will look to become the first man other than Phelps to break 51 seconds since the end of the supersuit era.

One of the biggest threats to Shields in this race is NCAA butterfly champ Jack Conger, who finished just 6 hundredths behind him to touch 4th at Olympic Trials. Conger became the 5th fastest 100 yard butterflier in history with his 3rd place finish at 2017 NCAAs, and cemented his status as the fastest 200 yard butterflier ever.

Two of the frontrunners and returning finalists to keep an eye on are Seth Stubblefield and Tim Phillips. Stubblefield hasn’t been quite as fast in-season as he was in the leadup to Olympic Trials, but it’s still safe to say he’s one of the frontrunners for a spot after he missed the Olympic Team by hundredths with a 51.24 to place 3rd last summer. Phillips also put up a new best time in the 51.2-range, and has been right around the in-season times he was putting up ahead of Trials at the Pro Swim Series this year. Matt Josa joined them in the 51-range with a personal best 51.61 in Trials prelims. To make the team, however, he’ll need to save his best swim for the final this time.

The big question in this race is whether or not American Record holder Caeleb Dressel can run down the top guys in the long course pool. One of his big advantages in the short course pool is his skill underwater, which was evident as he smashed Shields’ American Record with a 43.5 at NCAAs, but that’s not to say he isn’t going to be able to keep up in the long course pool. Dressel placed 7th in prelims of this race at Olympic Trials with a personal best 52.22, but scratched out of semifinals. He clearly hasn’t shown all his cards in this race, as he nearly topped that already with a 52.29 earlier this month at the Santa Clara PSS. It’s safe to say that Dressel will at least dip below 52 seconds.

Like Dressel, Ryan Held hasn’t put too much focus on this race in long course yet. During the 2016-17 NCAA season, he transitioned his focus at NCAAs from the 200 free to the 100 fly. Held smashed the ACC Record in the event, winning the conference title in 44.79 before placing 4th in the event at NCAAs. His long course best is a 54.44 from an in-season meet, but based on his speed and increased focus on butterfly, it’s not farfetched to say he could at least dip into the 52-range.

There are a few guys who have been in range of times that could make the final, but were slightly off their bests last season. Justin Lynch and Giles Smith were both in the 52-range last season and will look to bring it down to the 51s. Smith has been faster than 52 before, however, as his best is a 51.92 from 2015. Lynch’s best is a 52.43 from the 2016 Fran Crippen Swim Meet of Champions. Similarly, age group standout Ryan Hoffer has a personal best 52.89 from Junior Worlds in 2015, but wasn’t able to improve on that last season.

Cameron Craig and Andrew Liang are among the top 8 seeds in this race with a pair of 52s. Craig had a phenomenal season as a freshman at Arizona State, but his focus seems to have shifted more towards the freestyles and 200 IM. On the other hand, that just means we haven’t seen how much his butterfly has improved, so he could make a big drop from his entry time of 52.63.

DARKHORSE: Georgia’s Pace Clark is better known for his success in the 200 fly, but he’s already given us a preview of his improvements in his butterfly speed this season. At the 2017 Arena Pro Swim Series meet in Santa Clara, Clark swam a personal best 53.56, shaving over a tenth off his former best of 53.69 from the 2016 Mesa PSS.

Maybe no other event where the transition from yards to meters means so much.

I think it’s going to be between Shields and Dressel. Dressel’s last 20 meters no breath is insane. The OT finals were so close and I wouldn’t be surprised if this year’s nationals will be the same.

I think LeClos takes down Schooling this summer. He’s been working very hard and has a renewed focus.

I actually think Le Clos will be too focused on winning back the 200 fly throne (he lost it to Cseh in 2015 and Phelps last year), that he’ll get the silver medal behind Schooling in the 100.

Are you saying he wasn’t working hard before Rio?

but with Schooling aiming to break the world record (& he’s confident of that) it might just take that 50.56 to even medal

Le Clos also was going for the Goat’s world records. Look what happened lol. Schooling could add for all we know. Nothing says he will improve. If he mans up to the 2 fly he will definitely add imo. 50.8

looks like le clos will be channelling more energy to his 200 fly after the heartbreaking loss in Rio. 100 and 200 fly will be very exciting to watch for sure this summer.

Schooling may get beaten in 100 fly in worlds if he is still cocky as before! His rio performance maybe a flash in the pan. Other events he less likely can medal. Worst case, he come bk home with zero medal!

The Olympic Trials final in the 100 fly came down to the final stroke, and only hundredths separated 2nd through 4th.

Tom Shields, Jack Conger and Seth Stubblefield finished on the same stroke. Tom had the edge by being a little closer to the wall.

Those butterfly touches, they make all the difference.

Like many of us I give Shields a hard time for the inevitable piano in the 200m fly, however I do think he has a good shot at breaking 51 this summer. Conger also has a solid shot and Dressel is a dark horse because we haven’t seen him swim a tapered 100m fly since his monster swim at NCAA’s. We only have that PB of 52.22 and recently untapered 52.29 to base a prediction off of.

Seth stubblefield has moved to my area to work as a doctor. He came to my practice a few weeks ago and it seemed like he was done with swimming.

Wow. Impressive. He skipped that whole medical school thing. Right from college to being a doctor. I should’ve tried that.

Stubblefield went through med school and residency combined in a year?

It’s a three way race between Shields, Conger, and Dressel for me. I see everyone else being a few tenths back. Shields has been having sort of an up and down year, but overall a good one I’d say. Don’t think he, or anyone else, will break 51. Out of the three I think Dressel will make the biggest drop just based on the year he’s having. Conger is hard to read for me.

Yep , thats the trio who will battle neck to neck until the last 15 meters . Tim Phillips could sneak in …..

Last 15 meters: Dressel won’t breathe, Shields will be screaming to breathe, and Conger will be Conger. Can’t wait for the Rowdy call on that one.

Conger will be either too long or too short to the wall, long-term issue, won’t hit it perfectly.

If Giles even swims the 1oo …..if he does, Held will beat him.

What do you base that on? Cause in long and short course Giles got him beat

Want some ketchup with those shorts? They’ll go down easier.