2017 M. NCAA Picks: Historic 17 Second Swim Not Out of the Question 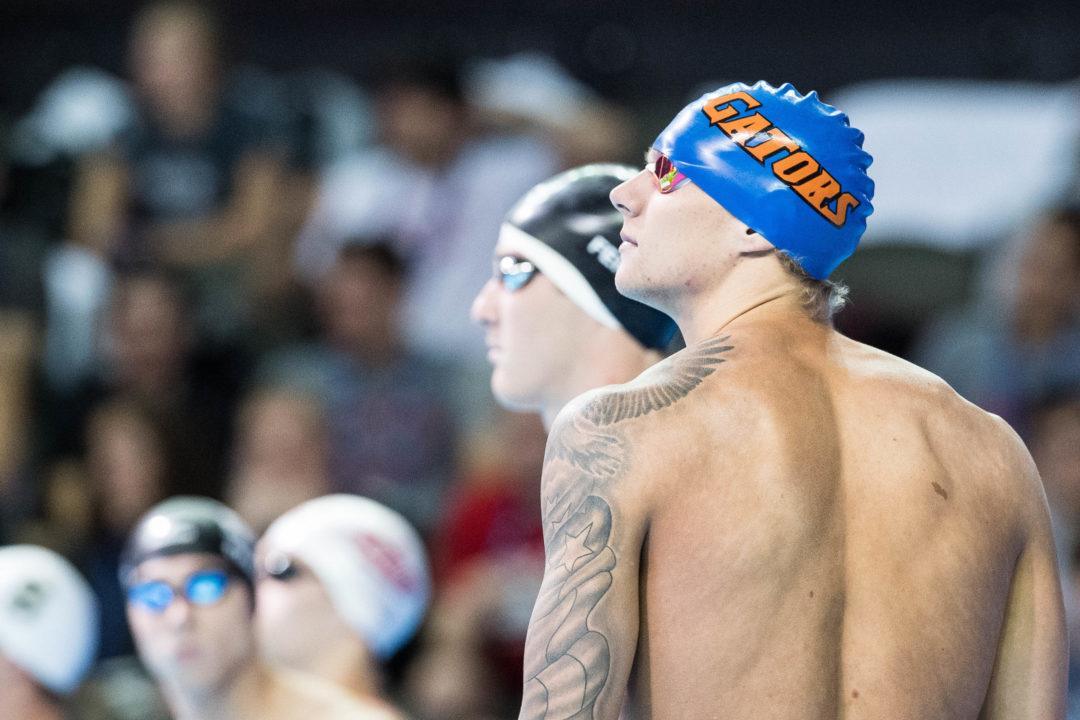 An unshaved Dressel cranked out an 18.46 to win the SEC Championship title, and put up blistering relays splits of 17.86 and 17.90 to lead the Gators to victory. Archive photo via Mike Lewis/Ola Vista Photography

A year after lowering the 50 free NCAA and American Records to an eye-popping 18.20, Florida’s Caeleb Dressel returns to the national stage as a junior for the Gators. This year, we could conceivably see the first-ever sub-18 swim from a flat start. An unshaved Dressel cranked out an 18.46 to win the SEC Championship title, and put up blistering relays splits of 17.86 and 17.90 to lead the Gators to victory. The distance between 18.2 and 17.9 is huge in swimming terms, so it’s certainly not a likely bet we’ll see 17 this week. But then again, Dressel has pretty consistently proved doubters wrong and showed last year he can drop significant time between SECs and NCAAs. Whether he breaks the 18-second barrier or not, Dressel is the heavy favorite to win his 3rd consecutive NCAA title in this event.

If anyone were to pull off an upset in this race, it would likely be NC State sprint star Ryan Held. Following his performance at the 2017 ACC Championships, Held sits just outside the top 10 performers of all time with his unshaved 18.68.

We could see a new face in the top 3 of this event, as Texas’ Joseph Schooling will swim the race at NCAAs for the first time. At Big 12s, Schooling set a new Conference Record with his 18.76. Teammates Jack Conger, who swam a personal best 19.20 at Big 12s, and Brett Ringgold, who finished 10th last season, will also be in the running for a top 8 finish.

In addition to Dressel and Held, the returning All-Americans in this race include Missouri’s Michael Chadwick and Michigan’s Paul Powers. Over half of last season’s top 8 graduated (or went pro, in the case of Gkolomeev), so we could see some of the swimmers from last season’s B final move up. Additional returning scorers include Stanford’s Sam Perry, Indiana’s Ali Khalafalla, NC State’s Andreas Schiellerup, BYU’s Payton Sorenson and Auburn teammates Peter Holoda and Kyle Darmody.

There area handful of returners who have put up promising results this season, and could make their way into the A final in Indianapolis. Texas A&M’s Cory Bolleter, Minnesota’s Bowen Becker, Tennessee’s Kyle DeCoursey, Auburn’s Zach Apple, and Cal’s Justin Lynch have all been 19-low this season. USC’s sprint duo of Santo Condorelli and Dylan Carter, as well as Penn State’s Shane Ryan, will also be in the mix as they return after taking a redshirt in 2015-16.

A few freshmen have established themselves as some of the nation’s best sprinters and will compete for All-American status in this race at their first NCAA meet. Cal’s Pac-12 champ Pawel Sendyk and teammate Michael Jensen are among the freshmen frontrunners, as is Alabama’s Zane Waddell.

Wow this event has gotten fast.

To final it seems it might take an 18. Thats crazy.

No, there isn’t going to be a 17 second 50 free this year. There might be some 17 second relay splits.

But Caeleb Dressel will be the winner of the 50 free. He’s got a superhuman dive and turn that is thrilling to watch.

Don’t see 17 happening if I’m going to be honest. Would love to see it though! Hope Dressel proves me wrong!

Based on nothing other than name alone, I want Ali Khalafalla to win something really bad. Like, imagine if he had a last 10 yards like Simone Manuel’s!? The PA announcers could have a field day with that, dude has a name that’s hella fun to say.

Not only was he unshaven he secretly had weights holding him down.

And he was swimming uphill both ways.

While doing the chomp during his streamline

While eating ipods on flying carpets!

Held’s really gonna give Dressel a hard time to win this year. They are only separated by .2. Both were unshaved when they posted those times so they are very comparable swims. I’m not saying that Dressel isn’t the favorite, but by no means is he going to run away with it like he did last year.

obviously cant leave schooling out of that equation..

I’m leaving Schooling out of that equation for 1st. 3rd perhaps, first, no way unless Dressel misses a turn.

I was responding to the held portion of the comment..

dressel is the clear favorite, obviously.. but as I stated above, it’s going be interesting to see if held, schooling or anyone else can come within .2 of him

and schooling has a great shot at 2nd

The superhuman start is a HUGE advantage for Dressel in a race this stacked though, he’ll be out in clean water while Held(and Schooling) could have to fight through the chop to get back up with him

Did you see Held’s underwaters when he went 18.6? They are Hoffer-esque. He goes right under a lot of the chop.

5
-3
Reply
outside smoke
Reply to  imswimmer

i thought the same thing – maybe the reference was to his drop in the 100, just proving in general that he has the capability?

I think it’s because he might be over swimming prelims. He’ll be in the last heat of prelims and will be able to judge how fast he needs to go. An 18.5 will make it back. He can do that with very little effort. His lane in the 50 free final won’t matter at all.