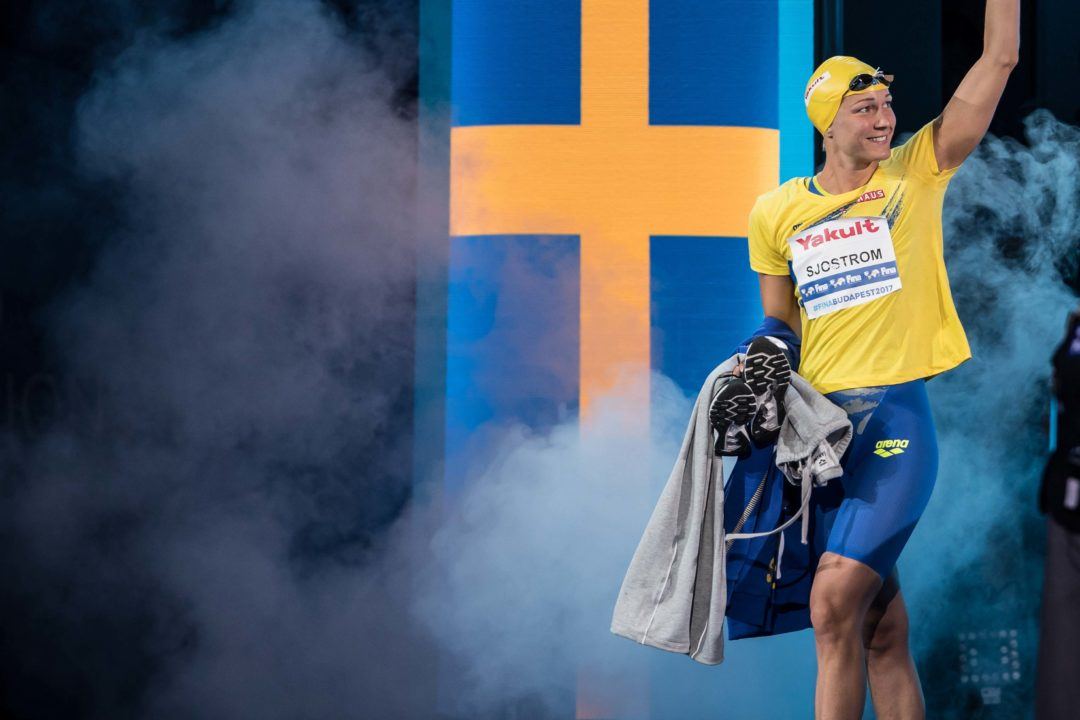 Newly minted world record holder Sarah Sjostrom will be back in action in the 100 freestyle at day 5 prelims. Current photo via Mike Lewis/Ola Vista Photography

Up first will be the women’s 100 free, where newly minted world record holder Sarah Sjostrom will be back in action.

Sjostrom became the first woman ever under 52 seconds leading off Sweden in the 400 free relay in 51.71. She was already the big favorite coming into the meet, but that swim solidified it.

She’ll swim in the 8th and final heat, alongside 2012 and 2016 Olympic champions in the event, Ranomi Kromowidjojo and Penny Oleksiak.

Bronte Campbell will have lane 4 in heat 7 after posting a pair of quick relay legs in the free (52.14) and mixed medley (52.30) relays. She’ll be joined by 200 free gold medalist Federica Pellegrini, Australian Emma McKeon, who has been on excellent form here, and 2016 50 free Olympic champ Pernille Blume.

The first circle-seeded heat will have American representatives Simone Manuel and Mallory Comerford side-by-side. Both have been on fire through four days in Budapest, with Manuel producing a pair of 52.1 splits, while Comerford broke Manuel’s American record leading off the gold medal winning 400 free relay in 52.59. They’ll be joined by Sjostrom’s teammate Michelle Coleman, who had a solid 53.21 PB on the lead-off during Sweden’s prelim relay before splitting 52.68 in finals.

Next up will be the men’s 200 back, where we’ll see Russian Evgeny Rylov for the first time this week. Rylov scratched out of the men’s 100 back as a top 5 seed, and wasn’t used on Russia’s mixed medley relays either. The 20-year-old won bronze at both the 2015 World Championships and 2016 Olympics, and will be a major threat for gold assuming he’s healthy.

Reigning Olympic champ Ryan Murphy will face-off with China’s Xu Jiayu in the 5th and final heat. Xu defeated Murphy in the 100 back on day 3. The first circle-seeded heat has defending champion Mitch Larkin alongside Ryosuke Irie, the 2nd fastest performer in history, and Junior world record holder Kliment Kolesnikov.

Eyes will be drawn to the 4th of 4 heats in the women’s 200 breast, as Yuliya Efimova and Lilly King will swim side-by-side after their showdown in the 100 breast, where King emerged victorious. Australia’s Taylor McKeown will be flanked by Brits Jocelyn Ulyett and Molly Renshaw in heat 3, and world record holder Rikke Pedersen goes head-to-head with Junior world record holder Viktoria Zeynep Gunes in heat 2.

The first of the circle-seeded heats in the men’s 200 breast will feature American Kevin Cordes, who has shown good form thus far in Budapest with a silver medal in the 100 breast. Hungarian Daniel Gyurta, the three-time champion, will also swim in heat 3 and will draw energy from the home crowd after missing the semi-finals last year in Rio. Sweden’s Erik Persson and Great Britain’s Ross Murdoch are also dangerous figures in the heat.

The women’s 4×200 free relay will be very interesting in the morning, with only ten teams entered, meaning only two won’t make it to the final. Adding to the intrigue is that they’ll all swim in the same heat.

Despite the lack of numbers, none of the country’s entered will be easy outs, so no one can slack off and expect to get in. Lineups will be released prior to the session.

You can check out all day 5 prelim start lists here.

Simone and Mallory right next to each other. I think a new rivalry is emerging.

Efimova/Ling next to each other will be interesting. Efimova has a way better 200 but King seemed to really get in her head in the 100.

The 200 gives Efimova more time to make up for her horrendous start.

Womens 100 free: I think we all know Sjostrom has this. It will he interesting to see how the minor medals develop though. Commerford had a great swim with american record, Manuek has had some good relay splits, Kromowidjojo had a sub 52 split on the relay, Bronte also had a good split on the relay, and McKeon has been great at this meet so far. Mens 200 back: If Rylov is healthy, he’s my favorite for gold. However, he scratch out of the 100 back is worrying. If Rylov is healthy, Murphy will have to hit his Rio time, which is unlikely based on what we’ve seen so far. I think Xu was in WR shape in the 100,… Read more »